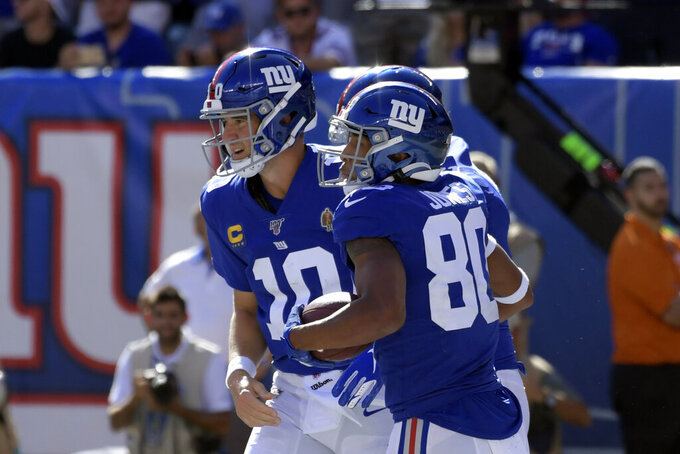 Shurmur said his coaching staff will be discussing all areas after the Giants fell to 0-2, losing their home opener 28-14 to the Buffalo Bills on Sunday.

Now in his second season as head coach, Shurmur said Manning has been the starter but he does not want to discuss whether he is thinking about making the change to Daniel Jones.

Jones was taken sixth overall in the NFL draft and played very well in the preseason. He also is a lot more mobile than Manning and offers that option to the offense.

"Eli has been our starter to this point," Shurmur said Monday. "I don't want to talk about anything else moving forward."

When told his refusal to make a definitive statement on his starting quarterback for Sunday's game at Tampa Bay would invite speculation, Shurmur said he understood. He also said he felt Manning has played well.

Manning seemed uncertain about his future minutes later in the locker room. He sounded as if he had not been told his status.

"We're 0-2 and you are looking for answers," the 38-year-old Manning said. "I get it, we drafted a guy early and you are not winning games, these things are going to come up. I just have to keep working and do whatever my job is."

Manning is 56 of 89 for 556 yards with two touchdowns and two interceptions. His quarterback rating is 78.7.

Jones led the NFL in the preseason, completing 29 of 34 passes for 416 yards with two touchdowns and no interceptions. He has been getting a series or two with the first team in practice to stay ready, but it's not much work.

What's surprising is the Giants have struggled scoring. They got a touchdown on each of their opening drives against Dallas and Buffalo, but added 17 points combined on every other drive.

The problem has been third down: New York is 5 of 23, which is horrible.

Manning said the uncertainty will not motivate him.

"Motivation is to win," he said. "There is nothing more than that. You want to win because you work hard. That's why you train, why you do everything, prepare and practice, so you can go out there and win football games and build something special, so nothing changes."