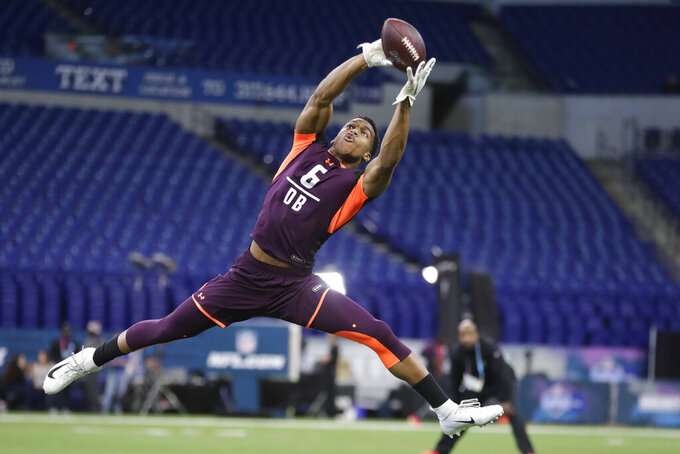 FILE - Troy defensive back Blace Brown runs a drill at the NFL football scouting combine in Indianapolis, Monday, March 4, 2019. This week’s stodgy, old NFL scouting combine is going Hollywood. The sound of silence will be replaced by music as players work out inside. Results and interviews will appear on the stadium’s video boards. Fans even will be encouraged to cheer. (AP Photo/Michael Conroy, File)

The sound of silence will be replaced by music as players work out inside. Results and interviews will appear on Lucas Oil Stadium's video boards and fans will be encouraged to cheer.

Whether all these changes signal a dramatically different future for the league's second-biggest offseason event remains unclear.

But after a one-year hiatus because of the COVID-19 pandemic, draft prospects, scouts, coaches and team officials are eagerly returning to Indianapolis one more time — perhaps the final time.

“I think the owners of clubs would love to bring a tent-pole event to their town from a fan standpoint, from an economic standpoint," said Jeff Foster, president of National Football Scouting, which runs the combine. “When they moved the draft to different cities and it took off, I think that's what sparked the interest and that's why we started looking at it."

The moving debate has raged for years, though this time seems different.

There's an expiring contract, the league's well-known desire to move big events around the nation, and three cities — Dallas, Indianapolis and Los Angeles — vying to host the event in 2023 and 2024. Final bids are due in early April and Foster anticipates an announcement in late May.

But team executives have long thought Indy was the perfect spot. The city has hosted every combine since its inception in 1987 for many reasons, including Indy's covered walkways, which allow players to attend workouts, medical exams and team interviews without needing a car or navigating traffic in an unfamiliar location. Plus, they can find restaurants and entertainment without even going outside,

That's not the case everywhere.

“If we do move to another city, it will be really difficult for us, especially that first year because it can be a real challenge to accomplish all the things we're used to in the same amount of time," Foster said. “The medical piece is the biggest challenge from a logistical standpoint."

If the past few years have taught Foster anything, it's that the only certainty is change.

In 2020, the combine was one of the last major American sporting events held before the pandemic struck. Last year, the event was replaced on the schedule by players' individual pro days. This year started with agents threatening to have players boycott the workouts and interviews because of proposed health restrictions on players' support staff. Many top players skip the workouts anyway.

That boycott was averted last week when medical experts agreed to loosen the initial guidelines adopted earlier this winter and recently revised because of the dwindling number of COVID-19 cases.

“I think you probably would have seen a good number of them carry through on that threat," said NFL Network analyst Daniel Jeremiah, who will be part of this week's coverage. “I’m glad it all worked out, but I totally understand where they’re coming from because you’ve been going forward with one idea in mind of how you’re going to get ready for this event, and then that changed late."

Organizers have made other changes, too.

They eliminated the psychological testing, which shortens players' schedules by one day. They're hoping to reduce wait times for medical exams with another alteration, and players will do bench press and workouts on the same day after some complained the day-after soreness impacted their workout results.

What fans will see is a new environment for the prime-time workouts.

League officials are offering up to 10,000 tickets to put fans in the stadium's lower bowl for the first time, separated from scouts. The league averaged 7,800 over four days in 2019 and 2020.

A D.J. will blare music during warmups and play softer music during the drills. Food and beverages, including beer, will be sold and two in-stadium hosts will keep the crowd revved up.

“We want to make it a bit more of a fan-friendly environment," NFL event contact and presentation coordinator Katie Conklin said. “The most important thing is keeping the integrity of the combine for the players and scouts, and we want to make it more exciting for the fans."

It also could help league officials determine whether a more glitzy atmosphere would play better in Dallas or Los Angeles — or if Indy has what it takes to host a combine with flair.

“I think logistically, there are a lot of things that separate (Indianapolis) from other cities," Foster said. “When it comes to managing an event with this many moving pieces, I'm certainly biased toward Indianapolis because of our partners, relationships and history here."