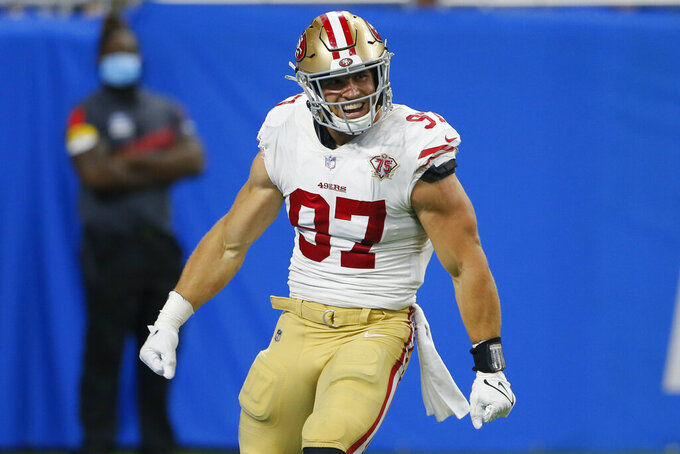 San Francisco 49ers defensive end Nick Bosa (97) reacts to a play against the Detroit Lions in the second half of an NFL football game in Detroit, Sunday, Sept. 12, 2021. (AP Photo/Duane Burleson)

After a 2020 season that was derailed by injuries, the 2021 season got off to a worrying start for the San Francisco 49ers.

While there were plenty of positives from a season-opening 41-33 win at Detroit on Sunday from the return of edge rushers Nick Bosa and Dee Ford to an efficient performance from Jimmy Garoppolo and a breakthrough game by rookie Elijah Mitchell, the most notable developments were significant knee injuries to cornerback Jason Verrett and running back Raheem Mostert.

Coach Kyle Shanahan said Monday that tests showed Verrett tore the ACL in his right knee, knocking out the team's best player for the season at perhaps its thinnest position after just one game.

Mostert will be out eight weeks with chipped cartilage in his knee.

After winning the NFC in 2019, the Niners went just 6-10 last year when they played long stretches without Garoppolo, Bosa, Ford and tight end George Kittle among others.

“That’s part of football,” Shanahan said. “I’m not going to sit here and be a therapist to everyone about it. I thought we got out of the game mostly healthy. Two unfortunate things for both of them. Fortunately, I think we will get Raheem back later this year. So we’ve got to make sure that guys hold down the fort while he’s gone.”

While the Niners have depth at running back, the injury to Verrett leaves the Niners thin at cornerback. Emmanuel Moseley, who was slated to start at the other outside spot, missed the opener with a knee injury but could return this week.

The other options on the roster are rookies Deommodore Lenoir and Ambry Thomas, journeyman Dontae Johnson and 33-year-old Josh Norman, who was inactive for the opener.

“Losing a player like Jason is a pretty big deal just because of the type of person he is and how good a player he is,” Shanahan said. “I feel like we have enough guys in our building, but that’s something you always have to look to see if there’s any way you can improve. You always do that.”

Verrett's injury history is extensive from a torn labrum that cost him eight games as a rookie in 2014, back-to-back knee injuries that limited him to five games combined in 2016-17, a torn Achilles tendon on the first day of training camp in 2018 and an ankle injury that limited him to one game in 2019.

He played 13 games last year and was being counted on heavily this season for San Francisco.

Pass rush. With healthy edge rushers Bosa and Ford back, the Niners got their dominating pass rush going. Bosa and Ford each had one of San Francisco's three sacks and five pressures apiece, according to Pro Football Focus. In one sequence, Bosa had a sack followed by a pressure from Ford that set up a pick-six by Dre Greenlaw.

Closing games out. The Niners led 41-17 when they took possession with 7:28 to play. But San Francisco went three-and-out and the Lions scored a TD and 2-point conversion. They they recovered an onside kick and scored and added another conversion to make it 41-33. The Niners recovered the onside kick this time, but Deebo Samuel fumbled on a third-down catch and San Francisco needed to force a fourth-down incompletion from its 24 to seal the win.

Garoppolo. After an offseason of questions about his long-term future in San Francisco after the drafting of Trey Lance, Garoppolo was sharp in the opener. He completed 17 of 24 passes for 314 yards with a 79-yard TD pass to Samuel. It was Garoppolo's sixth career 300-yard passing game and the seventh ever in a season opener for San Francisco.

LB Dre Greenlaw (groin) is day to day. ... Ford (ankle) and LB Marcell Harris (oblique) are expected to be able to practice this week.

104. Sixth-round rookie Elijah Mitchell rushed for 104 yards and a TD in his debut. That's the most yards in a season opener since the merger for a rookie drafted in the fourth round or later. The previous high was 96 yards for sixth-round pick Alfred Morris in 2012 for Washington against New Orleans. Shanahan was the offensive coordinator on that team and Niners RB coach Bobby Turner was Morris' position coach and they have a history of success with unheralded backs. There was one undrafted rookie to rush for more in an opener as Ronnie Coleman had 123 yards for the Oilers against the Chargers in 1974.

The Niners will spend the week in West Virginia practicing at The Greenbrier resort before finishing their road trip at Philadelphia on Sunday.