'It's a reunion': Top 2 Packers picks from Georgia defense 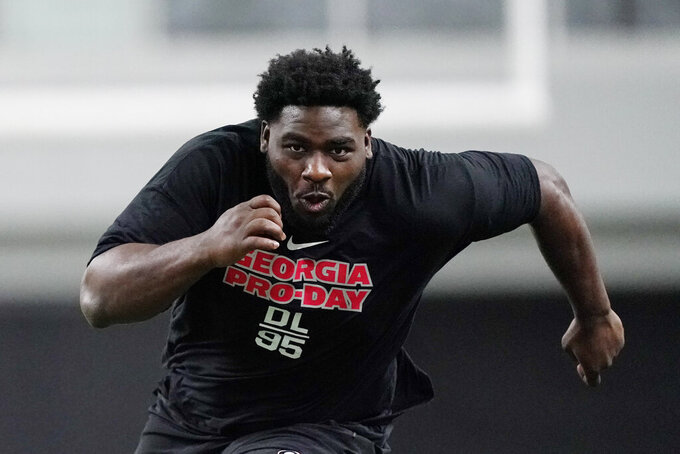 GREEN BAY, Wis. (AP) — Finding some more targets for Aaron Rodgers now that Davante Adams has headed west will have to wait.

The Green Bay Packers passed up on a chance to boost their receiving depth with either of their first-round picks Thursday night. They instead continued loading up on defensive players from Georgia by selecting linebacker Quay Walker with the 22nd overall selection and taking tackle Devonte Wyatt six picks later.

“It’s a reunion,” Walker said during his Zoom session after a reporter told him the Packers were taking Wyatt as well. “Aww, man. That’s crazy.”

All three of the Packers' first-round picks over the last two years have been Georgia defensive players. They took Bulldogs cornerback Eric Stokes with the 29th overall selection last year.

“It’s a blessing,” Wyatt said. “Getting drafted with a teammate and already having teammate that’s already down there, so I’m very happy, I’m very confident. I’m ready to go ball.”

Focusing on defense in the first round is nothing new for the Packers.

The Packers haven’t taken a wide receiver in the first round since selecting Javon Walker in 2002.

This seemed to be a year in which that trend might change because the Packers lacked proven receivers after trading Adams to the Las Vegas Raiders for a first-round pick (22nd overall) and second-round selection (53rd).

A run on wide receivers earlier in the first round might have caused the Packers to look elsewhere.

While speaking Thursday night on Pat McAfee’s SiriusXM and YouTube show, Rodgers said the Packers had six wide receivers rated as first-rounders and that all of them were taken among the first 18 picks.

“There’s some veteran guys out there that I think could be possibilities and also we have two picks in the second round," Rodgers said. "I’m sure there’s some guys on the board they probably like.”

The Packers didn't like any of the remaining wide receivers on the board quite as much as the Georgia duo.

Walker started all 15 games for Georgia's national championship team last season and collected 67 tackles. Wyatt had 39 tackles and was an Associated Press second-team all-Southeastern Conference selection and a first-team all-conference pick from the league’s coaches.

“Obviously they were two of many on that defense,” Gutekunst said. “The two things with these two particular players, and obviously they’re different, but their speed and explosiveness is off the charts. And I think their ability to create havoc in the run game and in the passing game I think, just the all-around nature of those players was something that really drew us to them.”

Wyatt was arrested in 2020 on a misdemeanor charge of family violence criminal trespass, though the case was later dismissed.

“We brought him in and spent a lot of time with him not only when we brought him in here to Green Bay, but really did kind of a deep dive in the human being and making sure that he could fit in our culture here,” Gutekunst said.

Gutekunst said the Packers “walked away feeling really good about who he was and how he would be here for the Green Bay Packers.”

That set in motion the Georgia reunion at Green Bay.