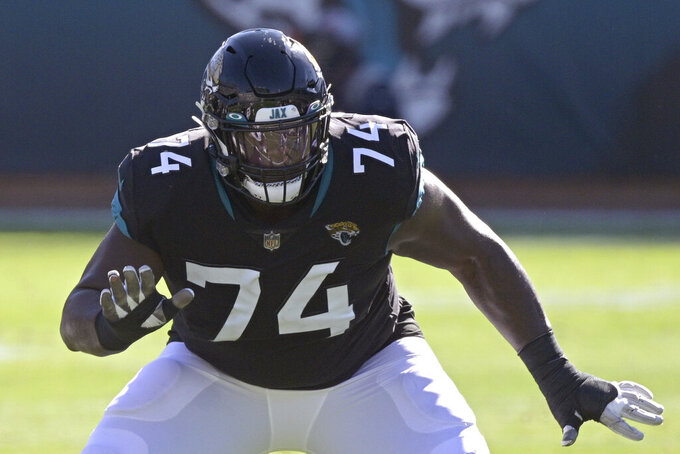 FILE - Jacksonville Jaguars offensive tackle Cam Robinson (74) sets up to block during the first half of an NFL football game against the Chicago Bears in Jacksonville, Fla., in this Sunday, Dec. 27, 2020, file photo. The Jaguars are planning to use the franchise tag on left tackle Cam Robinson, preventing him from hitting the free-agent market and making him the blindside protector for presumptive No. 1 draft pick Trevor Lawrence. Coach Urban Meyer said Tuesday, March 9, 2021, that “we are headed in that direction.” (AP Photo/Phelan M. Ebenhack, File)

The Jacksonville Jaguars used their franchise tag on left tackle Cam Robinson, preventing him from hitting free agency and making him the blindside protector for presumptive No. 1 draft pick Trevor Lawrence.

The team made it official Tuesday, about two hours after coach Urban Meyer said “we are headed in that direction.”

“We realize that he has a great future,” Meyer said during a video call to preview free agency. “His ceiling is very high. I’ve studied him very much. I spent some time with him.

Tagging Robinson will guarantee the lineman about $14 million in 2021, a number that could fluctuate either way depending where the NFL salary cap ends up. A second-round draft pick from Alabama in 2017, Robinson made a little more than $7 million in his first four years in the league.

Robinson has started 50 of a possible 67 games, missing 14 games in 2018 after tearing a knee ligament.

Meyer added that he expects to sign Robinson to a long-term deal. Jacksonville has the most salary cap space (roughly $85 million) of any team in the league, and protecting the team's next quarterback — presumably Lawrence — is a priority.

“It couldn’t have gone better," Meyer said. "We had high expectations going into it, like really high. I’ve seen him throw before. I really wanted Darrell Bevell and Brian Schottenheimer to witness it.

"Watching a guy throw, especially throw on videotape, it’s not the same. You want to hear it leave his hand, listen to it leave, go by you. To me, I don’t know how you evaluate a quarterback without doing that. I thought he did great. We’ve had a couple Zoom calls with him and he’s been great. We like where we’re at with him.”

Jacksonville is coming off a 1-15 season, the worst in franchise history. Meyer has spent the past two months studying the team’s personnel and made it clear Tuesday that the offensive line is one of the team’s strengths.

He believes Robinson and right tackle Jawaan Taylor have their best football ahead of them and really likes the interior trio of center Brandon Linder and guards Andrew Norwell and A.J. Cann. The line helped undrafted rookie James Robinson run for 1,070 yards and seven touchdowns in 2020.

Other tidbits from Meyer:

— Meyer said strength coach Chris Doyle's brief tenure was a distraction that no one wanted. The Jaguars and Doyle parted ways via a separation agreement last month, a day after Meyer defended the hire and hours after a prominent diversity group assailed the team and called it “simply unacceptable.”

“I saw the impact of the decision and the distraction that it caused," Meyer said.

— Cornerback CJ Henderson is recovering from labrum surgery. The ninth overall pick in 2020 missed eight games as a rookie, including the final seven because of a groin injury.