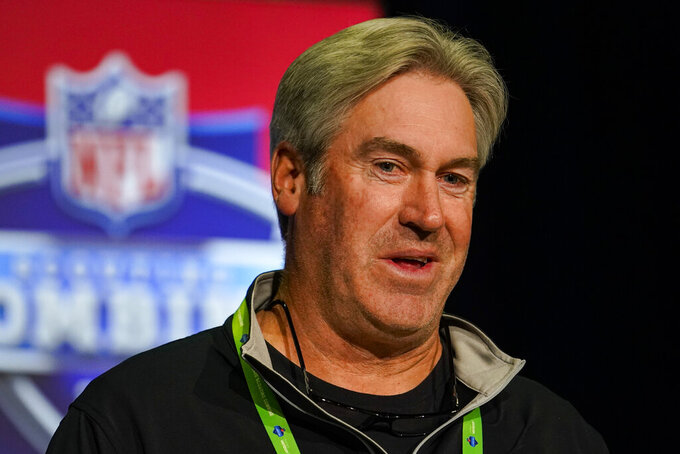 JACKSONVILLE, Fla. (AP) — The Jacksonville Jaguars used their franchise tag on left tackle Cam Robinson for the second straight year Tuesday, guaranteeing him $16.6 million in 2022 and potentially divulging their plans for the No. 1 pick in next month's NFL draft.

If Robinson signs the one-year tender, his salary would be fully guaranteed next season. The sides also could still work to reach a long-term deal.

The former Alabama standout has started 61 games over five seasons since Jacksonville drafted him with the 34th overall pick in 2017. But he's been far from one of the league's best blind-side protectors.

Bringing him back was a surprise move considering the Jaguars drafted Stanford left tackle Walker Little with the 45th overall pick last year and had plans to pair him with quarterback Trevor Lawrence for the foreseeable future. Little started the final two games of the 2021 season and played well, leading some to believe Jaguars general manager Trent Baalke would move on from Robinson.

But with Robinson expected to sign the tender and return for another year, Little likely would compete with right tackle Jawaan Taylor on the opposite side. With Robinson, Little and Taylor expected in the fold, it's unlikely the Jags would draft Alabama's Evan Neal or North Carolina State's Iken Ekwonu with the top pick next month.

Instead, they're seemingly poised to go with a pass rusher — either Michigan's Aidan Hutchinson or Oregon's Kayvon Thibodeaux — or try to trade out of the No. 1 spot in hopes of picking up more draft capital.

“You are always open for business," Baalke said last week at the NFL combine. "Now, whether we’re going to be able to move or not, but we’re very comfortable taking the pick as well. You have to be prepared for anything in this league, so to say we won’t shop it is probably not 100% correct, but to say we will is not (100% correct), either.

“We’re going to see what comes, and if something comes our way and makes sense to us, we’ll make that decision at that time.”

Baalke and new coach Doug Pederson have made it clear that the Jaguars are in rebuilding mode, no surprise considering the Jaguars have lost 35 of their last 41 games and have little Pro Bowl-level talent.