Jaguars could enter AFC South race with win over Titans 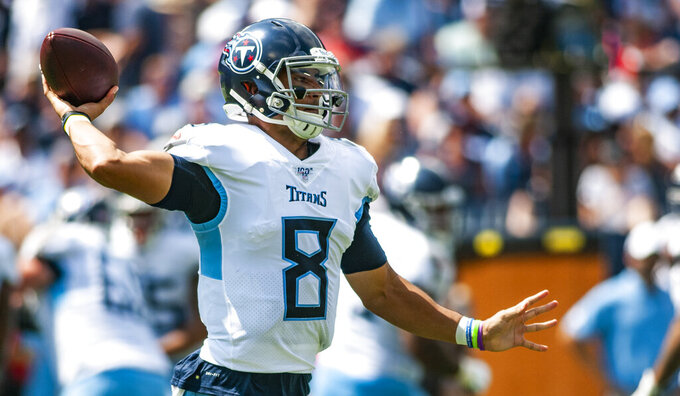 The AFC South is shaping up as quite a division race. Should the Jaguars win at home Thursday night against the Titans, it would tighten up things early in the season.

But Tennessee, ranked 18th in the AP Pro32, is a 1½-point favorite over Jacksonville.

The Colts, even without Andrew Luck, and the Texans, even though J.J. Watt has not stamped his domination on a game yet, both are 1-1 with indications they'll get stronger as the schedule progresses. Tennessee also is 1-1, and would be a threat in the division if it shows it can consistently win road games.

Though Jacksonville has not been any particular problem as an opponent: The Titans have won four straight and six of seven in the series. Tennessee needs one more victory to match its longest win streak in series history.

It's hard to pinpoint what the Jaguars (0-2) can be optimistic about. The defense needs to be its calling card with QB Nick Foles injured, and it stepped up a bit in last week's loss to Houston. The uproar over standout cornerback Jalen Ramsey seeking a trade has drawn the headlines for Jacksonville, along with his sideline confrontation with coach Doug Marrone on Sunday.

Too many negative vibes for the Jags.

KNOCKOUT POOL: Wasn't quite fair to pick Patriots over Dolphins. This week isn't fair either, as we take DALLAS.

Texans have a look we like, and Watt is bound to take charge soon.

Have to feel for the Jets, but the Patriots won't and will pile it on.

Have to feel for the Dolphins, but Cowboys won't and will pile it on.

Broncos were 1 second from fulfilling our UPSET SPECIAL vs. Chicago. Not going there this time.

Eagles are banged-up group and Lions showed a lot against Chargers. Still ...

Lamar Jackson vs. Patrick Mahomes. Such a juicy matchup won by ...

What a juicy matchup this would have been with Drew Brees healthy.

Despite being Luckless, Colts are looking pretty good.

Vikings could use a big rebound game. So could Raiders.

Don't trust the Bucs much, but Giants are going with rookie QB Daniel Jones.

Not many teams that Panthers would be favored over right now.

Hard to believe Bills could be 3-0. No, we don't see them as threat to Patriots. Anyway ...

Another prime-time spotlight for the Browns. Aaron Donald might spoil their night.

Upset special: 1-1 against spread, 1-1 straight up