Jets' Corey Davis out to prove he's a No. 1 wide receiver 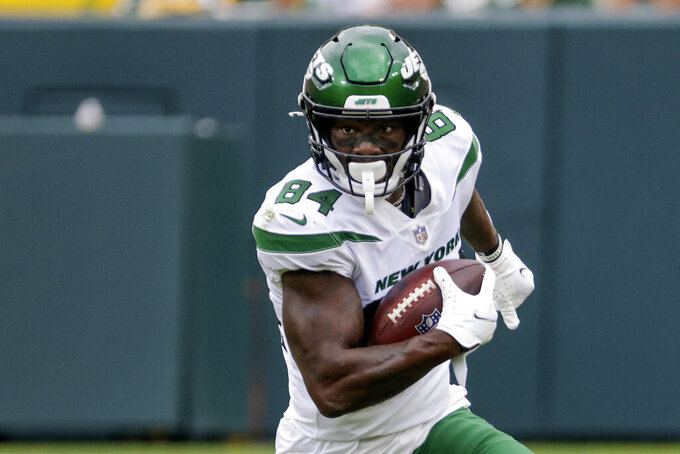 FILE- In this Saturday, Aug. 21, 2021, file photo, New York Jets' Corey Davis runs during the first half of a preseason NFL football game in Green Bay, Wis. Davis understands why he's with the New York Jets. And he's ready to show everyone the reason. The 26-year-old has 207 career catches for 2,851 yards and 11 touchdowns in 56 games. (AP Photo/Mike Roemer, File)

FLORHAM PARK, N.J. (AP) — Corey Davis understands why he's with the New York Jets. And he's ready to show everyone the reason.

One big catch at a time.

“I believe ... I know that I’m a No. 1 receiver in this league," Davis said this week. "It’s great that (the Jets) saw that during free agency.”

Davis spent his first four NFL seasons in Tennessee after being the fifth overall pick in the 2017 draft out of Western Michigan. He had some impressive games and flashed playmaking ability, but he wasn't necessarily viewed in league circles as an elite, bona fide top wide receiver — especially after the Titans drafted A.J. Brown in 2019.

Davis wasn't re-signed during the offseason and hit free agency. The Jets pounced, giving him a three-year, $37.5 million contract.

And just like that, Davis was second-fiddle no more.

“I’m ready for it," he said. "I’ve always thought of myself as a No. 1 receiver. I have to go out there and prove it to the league.”

The 26-year-old Davis has 207 career catches for 2,851 yards and 11 touchdowns in 56 games. Those are hardly numbers to brush aside, but he wants more. And he believes he'll have the type of production that leaves no doubts as to how good he is.

Davis has already endeared himself to his new teammates, who voted him one of the squad's captains on offense.

“It's amazing,” Davis said, clearing his throat. "It's a great feeling, man, just coming here for the first year and having these players vote me to be a captain, it speaks volumes. They have a lot of trust in me and a lot of confidence in me, and it feels good, man.

Taking more of a leadership role was something Davis focused on when he joined the Jets.

“I wanted to evolve as a person and as a player as well,” he said. “And being a leader is part of that. We have a young team and a young wideout corps and a lot of these guys lean on me, and that's something I want. I want that pressure."

Last season was tough for Davis off the field. He missed two games after testing positive for COVID-19. A few weeks later, he opted to play just one day after his older brother Titus — his idol and a former NFL receiver who spent time with the Jets — died from a rare form of kidney cancer.

Davis leaned on his faith, as well as his wife and their infant daughter, to help lift him from a dark place.

“He's at such a good point in his life personally, off the field, just with his family and all that,” offensive coordinator Mike LaFleur said. “It carries over to the building. He's the same person every single day.”

On the field, Davis has established a nice rapport with rookie quarterback Zach Wilson. They increasingly showed a good connection during training camp and in preseason.

Wilson, who was also voted a captain, was even more impressed by what he learned about Davis off the field.

“He’s not a vocal leader and I don’t think you need him to be, at all,” Wilson said. “I think you see his leadership day in and day out and just the way that he approaches the game and the way that he just does everything right. And, you know, he never complains about anything. You’re never calling on him in meetings for not giving enough effort on a play or something like that.

“Guys see that and everyone is just like, ‘Geez, look at Corey, this guy’s always doing the right thing.’ And I think that he’s bringing guys along with him. And what makes him the No. 1 receiver is literally just that.”

His coaches have noticed, too.

“I can gush for the next five minutes, but I’ll try to keep it quick,” coach Robert Saleh said. “From a coach’s standpoint, when you draw up a player, you can’t draw it up better for him.”

Saleh praised Davis' business-like approach to the game and his preparation, how he communicates with his teammates and the way he stays on top of his conditioning.

“Then you go on the field, he’s on his job, every single detail,” Saleh said. "He’s deliberate in everything that he does. And then, on top of it, he’s pretty damn good at what he does, too.

“He’s been everything we expected as a free agent pickup, because they don’t always work out that way. And knock on wood, he’s been awesome.”