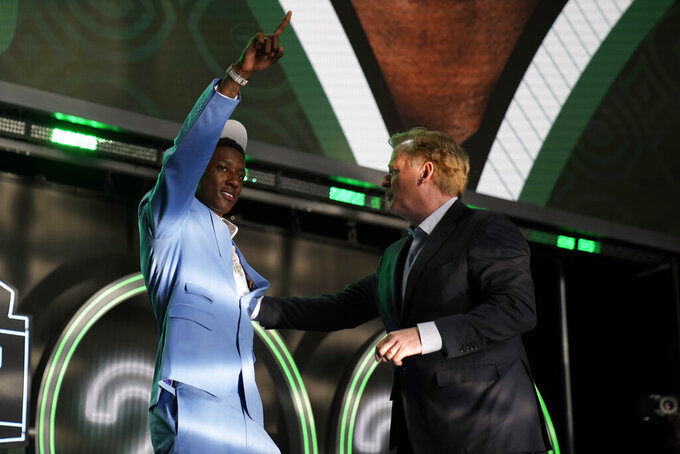 FLORHAM PARK, N.J. (AP) — The New York Jets are adding some Big Apple Sauce to their defense. A big-time edge rusher, too.

And get ready for some Wilson-to-Wilson connections on offense.

On a busy Thursday night during which the Jets drafted three players — including pulling off a trade to get back into the first round — New York filled some major needs.

Cincinnati cornerback Ahmad “Sauce” Gardner was taken by the Jets with the No. 4 overall pick. After bolstering the secondary, New York gave second-year quarterback Zach Wilson and the offense another playmaker by selecting Ohio State wide receiver Garrett Wilson at No. 10.

Gardner, wearing a diamond-encrusted “SAUCE” medallion and an equally gaudy sauce bottle on a chain around his neck at the draft site in Las Vegas, oozes confidence on and off the field. New York can only hope he can be as dominant a defender as their previous homegrown shutdown cornerback: Darrelle Revis, who went 14th overall in 2007.

“That's the main thing I know — when I think about the Jets, I think about Darrelle Revis,” Gardner said during a Zoom call. “He used to be one of my favorite corners in the league. I still watch him to this day.”

The Jets, who had two selections in the top 10 for the first time in franchise history, are looking to end the NFL's longest active playoff drought at 11 seasons. And this was considered a crucial draft for Douglas, who is overseeing his third full offseason after being hired in June 2019 to replace the fired Mike Maccagnan. The Jets have won only six games the past two seasons, but showed some positive signs last season under first-year head coach Saleh and rookie quarterback Wilson.

The focus this offseason has been on the progress of Wilson, who capped a down-and-up year by not throwing an interception in his final five games. Surrounding last year's No. 2 overall pick with playmakers has been a priority for Douglas and the Jets, who signed tight ends C.J. Uzomah and Tyler Conklin, and guard Laken Tomlinson in free agency.

Wide receiver was expected to be a target early in this draft, and New York pounced on the speedy Wilson with their second pick of the night.

But first, the Jets addressed their defense, which struggled mightily last season. Defensive coordinator Jeff Ulbrich’s unit ranked last or close to the bottom of the league in several statistical categories. Edge rusher and cornerback were considered priorities for New York in the draft, and Gardner addresses that need in a major way.

“I know I’m going to be a great teammate and I’m going to be a sponge, somebody that’s able to take information from everyone and not feeling like I’m too good for anyone,” Gardner said. “Just being a hard worker.”

The 5-11, 185-pound Garrett Wilson had 23 touchdown catches in 33 career games with 19 starts with the Buckeyes, establishing himself as one of the top wide receivers in the country.

His ability to track passes and work the sideline with excellent footwork were plus tools that pushed him up the draft boards. Wilson joins a receiving group that includes Corey Davis, Elijah Moore, Braxton Berrios and Denzel Mims, along with tight ends C.J. Uzomah and Tyler Conklin, both signed in free agency.

“He's another speed guy and he's got the whole repertoire as far as the route tree,” Saleh said of Wilson.

The Jets went back to the defense to snatch Johnson, who was considered a possibility to go within the top five or 10 picks but slid to the bottom half of the first round.

“They said they'd come get me,” Johnson recalled of his conversation with the Jets during his recent team visit. “And that's what they did.”

The 6-5, 262-pounder is a powerful pass rusher who is also effective playing the run. Johnson, who transferred from Georgia to Florida State in 2021, was the Atlantic Coast Conference defensive player of the year after having 12 sacks.

“He's the most pro ready of all the pass rushers this year,” Douglas said.

And it capped an opening night during which the Jets drafted three of the top eight players on their initial board.

“You get three impact players at three premium positions," Saleh said. "You dream of it happening.”