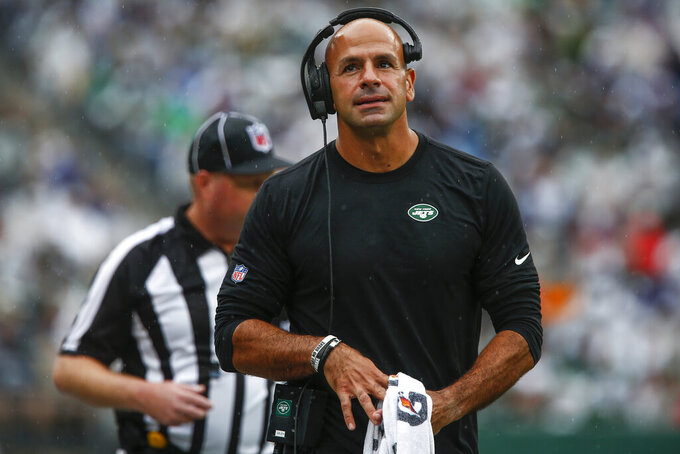 EAST RUTHERFORD, N.J. (AP) — The game was already long decided when Michael Carter found himself wide open in the end zone — and dropped a sure touchdown pass.

It was just that kind of day for the New York Jets: Stumbles, fumbles and bumbles, especially on offense.

“I hate that it feels like we just lost the Super Bowl,” Carter said after a 24-9 season-opening loss to the Baltimore Ravens on Sunday.

With performances like this, the Jets appear a long way from playing in the NFL's biggest game.

The final statistics don't look half bad: 378 net yards and 24 first downs. But New York went 2 of 14 on third down, failing to convert one until their ninth opportunity with 9 minutes remaining and down 24-3.

“It wasn’t a good showing from us on offense,” said Joe Flacco, who was 37 of 59 for 307 yards with one touchdown and an interception. “We just never really got into a rhythm and got any energy going behind us.”

Flacco was largely ineffective against the team whom he helped lead to a Super Bowl victory to cap the 2012 season. There were multiple dropped passes. The 37-year-old quarterback, starting for the injured Zach Wilson, also was lacking consistent protection up front.

It was a bad showing considering how much optimism there was about the Jets' offense entering the season.

Wide receiver Garrett Wilson was drafted in the first round and running back Breece Hall in the second. Tight ends C.J. Uzomah and Tyler Conklin were signed as free agents. The offensive line was boosted by the signing of left guard Laken Tomlinson, although injuries to tackles Duane Brown and Mekhi Becton caused some shuffling up front.

“It's obviously a punch in the face to come out and lose a football game,” Flacco said.

And that came despite a solid effort by the defense, which held Baltimore quarterback Lamar Jackson to just 17 yards rushing on six carries and the Ravens to just 274 total yards.

“Three explosive plays (allowed) all day, you're not supposed to lose the football game,” Saleh said.

But there were early signs it would be a brutal day for the offense.

Flacco was intercepted by Marcus Williams on the Jets' third drive when intended receiver Lawrence Cager slipped on the wet MetLife Stadium turf and the ball went right to the Ravens safety.

New York then missed a chance to tie early in the second quarter when Greg Zuerlein was wide left on a 45-yard attempt.

Trailing 24-3 early in the fourth quarter, Hall fumbled after a 7-yard catch that would’ve been a first down and Marlon Humphrey recovered for the Ravens.

“It’s very frustrating," said Hall, who lost only three fumbles in 800 touches during his college career at Iowa State. “I’m not used to it and don’t usually do it. ... It’s going to hurt, but I've just got to move on and have amnesia.”

Many long-suffering Jets fans can only wish they can do that. And many of those who remained at the stadium when Carter's gaffe happened — on fourth-and-goal from the 6 with 4:17 left — headed for the exits.

But, wait, there was more.

With 1:18 remaining, it appeared Elijah Moore had a touchdown catch on third down. But he was called for offensive pass interference — negating the score.

The Jets finally got into the end zone a few plays later on Conklin’s 2-yard TD catch with 1 minute left, but Zuerlein missed the extra point.

“You’re not going to beat a veteran team when you’re not capitalizing on the momentum that you gain,” Saleh said. “From dropped passes to being loose with the football and missed kicks, this is a game, in my opinion, that we absolutely lost.”

The loss was the Jets' 13th straight in the month of September, dating to the 2018 season. And it had many fans who were so excited about the season just three hours earlier throwing up their hands in disgust.

“Everybody is going to say it’s the same old (stuff), but it’s not the same (stuff)," Conklin said. "We have a good team and I think everyone can feel it.”

The Jets now need to show it.