Jets' porous D continues to get run around by opponents 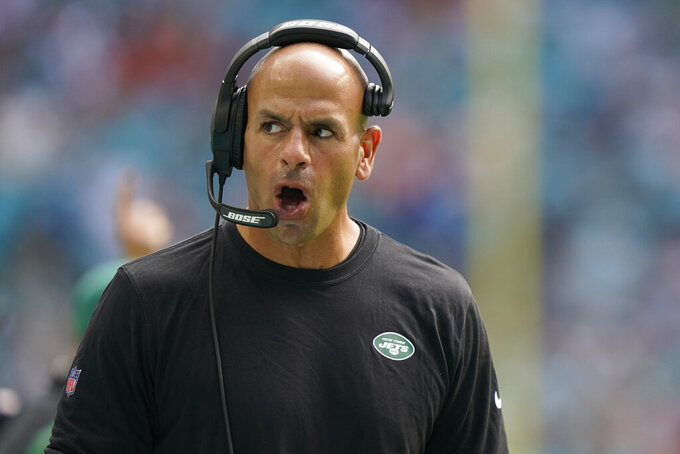 NEW YORK (AP) — The inability to stop the run has been the running theme for the New York Jets' defense this season.

Teams know they can use their ground game effectively against them, so they pound the football over and over — daring the Jets to stop them.

So when Duke Johnson — Miami's fourth-string running back — gouged New York for a career-high 107 yards and two touchdowns in the Dolphins' 31-24 victory Sunday, it was just another embarrassing performance to add to the growing list for the 3-11 Jets.

“We just can't allow that leaky yardage,” defensive tackle Sheldon Rankins said Monday. “Also, there were not enough negative (yardage) plays. We've got to be able to keep teams in behind-the-sticks situations, create some negative tackles behind the line of scrimmage.

“When you're unable to do that throughout the course of the game and you allow teams to constantly gain yards, they're eventually going to pop one."

Such as the 30-yard run by Myles Gaskin that helped set up the go-ahead touchdown midway through the fourth quarter.

“They were able to get into a rhythm with their run game,” Rankins said, "and we've just got to be better collectively overall in a few areas.”

The Dolphins finished with 183 yards rushing against the Jets, who allowed 203 yards rushing to New Orleans in their previous game and 185 to a banged-up Philadelphia squad before that.

The inability to stop the run — New York's defense entered the weekend ranked 29th in the NFL — has allowed opponents to sustain long drives. It has also stifled the offense, which was knocked out of rhythm in the second half after a hot start.

Next up is Jacksonville, which is 2-12 but has a solid running game led by James Robinson. And there's no doubt how the Jaguars and rookie quarterback Trevor Lawrence will try to attack the Jets' defense Sunday.

“He's going to try to use this as a chance for himself to get better,” Saleh said of the No. 1 pick in April. “They've got a really good run game and I'm sure they're champing at the bit to come run the football."

Zach Wilson's final numbers — 13 of 23 for 170 yards with no TDs or INTs — were hardly eye-popping. But the rookie quarterback led the Jets to scores on three of their five possessions in the first half as New York took a 17-10 halftime lead.

Wilson, who had a touchdown run, hasn't been picked off in two straight games, and that's a sign of progress. He had some nice off-schedule plays that kept drives alive, flashing the talent that made him the No. 2 overall pick.

Wilson had his share of miscues, including coming up short on two possessions in the last 3:37 with New York down by seven. (Saleh said he would've gone for 2 points — to win — if the Jets scored late). But Wilson appeared much more comfortable making the routine throws and running the offense.

That's the big-picture view the Jets are focused on.

“I think he’s going through a tremendous learning curve and it’s one that he’s going to be able to capture and run off of it and take with him to the offseason and grow off of,” Saleh said. “We’re really excited about where Zach is and we’re really, really confident that his arrow is definitely pointing up and it’s only going to get better.”

See above. The run defense is atrocious and porous.

Brandin Echols. The rookie cornerback returned an interception 20 yards for a touchdown to help the Jets tie it late. The sixth-round pick from Kentucky recently missed three weeks with a quadriceps injury, but has been solid while starting 11 games.

The offensive line. The big boys up front have been much improved from earlier this season, but took a step back Sunday. Starting left tackle George Fant missed the game with a knee injury, so that was a factor. But the Jets gave up six sacks and were overrun by Miami's aggressive defense in the second half.

S Elijah Riley, carted off the field with a neck injury, is in the concussion protocol. “He checked out really good at the hospital (Sunday) and we're optimistic he'll be able to return this season,” Saleh said. “Hopefully this week." ... Saleh said DL Quinnen Williams ”looks good" after aggravating a shoulder injury and the team is optimistic about his chances of playing. ... Fant (knee) could return this week. ... TE Ryan Griffin is dealing with a knee injury. “It's not looking good for this week,” Saleh said. ... DE John Franklin-Myers, WR Vyncint Smith and S Sharrod Neasman tested positive and were placed on the COVID-19 list, along with practice squad defensive lineman Tanzel Smart and cornerback Lamar Jackson.

3 for 11 — While the defense struggled to stop the Dolphins' ground game, the Jets' offense didn't help matters with a dismal showing on third-down opportunities.

What appeared to be a marquee matchup entering the season is a dud with the Jacksonville and Lawrence heading to New York to take on the Jets and Wilson in a showdown between the top two picks in this year's draft. This one could go a long way in helping determine the top of the draft order next April.