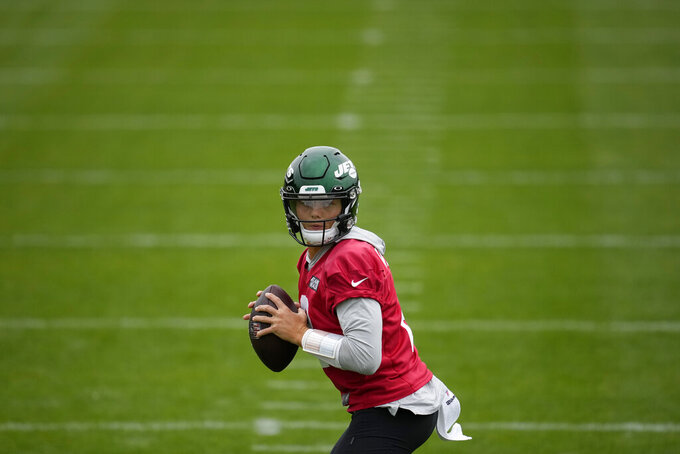 “It’s how can we just keep stacking those bricks and keep getting better?" the New York Jets rookie said. “And so that was the focus this past week, and not ever getting complacent.”

The Jets (1-3), coming off a 27-24 overtime win against the Tennessee Titans, hope Wilson can carry over his success to Sunday when New York faces the Atlanta Falcons at the home of English Premier League team Tottenham.

The 22-year-old Wilson, who had never previously been to Britain, threw for 297 yards and two touchdowns, including a 53-yard strike to Corey Davis after the QB scrambled and pointed for his leading receiver to go deep for a go-ahead score in the fourth quarter. It was one of a handful of improvs — sorry, “off-schedule” plays — Wilson pulled off to help the Jets earn their first win of the season.

“You find what things you can still improve on — good or bad plays,” Wilson said at a press conference at the team hotel outside the English capital.

“But they also play a game of game management and they just wait for you,” Saleh said. "So there’s a feel that Zach’s going to get. The more he learns the game, the more he feels the speed of the game, the more he’ll know exactly when to pick and choose his shots. And when he does, just like Sunday, they’ll be explosive.

“So hopefully he learns faster.”

Wilson will have another weapon — rookie receiver Elijah Moore, back from a concussion — available Sunday as he looks for back-to-back strong performances after the No. 2 overall draft pick got off to a rough start in New York's first three games.

“It’s exciting to have him back," Wilson said, “because I’ve got a lot of trust in him and the player that he is. He’s going to be another weapon I feel like a lot of people aren’t going to be ready for.”

For a quarterback who leads the NFL in interceptions with eight, Wilson surely is aware that the Falcons defense has yet to snag a pass this season — accompanied only by the Jets in that statistic.

But he's not expecting any free rides.

“I promise that defense is hungry to make some things happen,” Wilson said. “Just like us (overall), they’re eager to improve.”

“We were texting that night,” LaFleur said of his Sunday night messages with Wilson. “It was like, ‘Do enjoy this, too. It was not easy and you're sitting there, worried about all the plays you didn’t make.'”

LaFleur, speaking Thursday, also asked himself whether he could have made better calls to help the rookie.

“You've got to appreciate wins in this league, but you've also got to learn from the wins and the losses," he said. “And there was a lot to take from this game in terms of, again, cleaning up so much stuff across every position group and again, taking those small incremental steps to become the offense and the team we want to be.”

NOTES: Falcons WR Calvin Ridley's absence “doesn’t really affect our game plan,” Saleh said, because it was put in place before the Falcons announced that their top receiver wouldn't make the trip. Falcons veteran QB Matt Ryan “can get the ball to anyone" and they have other weapons in Cordarrelle Patterson and rookie tight end Kyle Pitts, he said. ... Along with Moore, CB Brandin Echols is “on track” to play, the Jets coach said. “Everyone looks like they’re ready to roll, the people who traveled,” he said. ... After the transatlantic flight, LB C.J. Mosley acknowledged Friday that his “legs are a little heavy right now." He and CB Bryce Hall both played all 100 defensive snaps against the Titans. But Mosley, who is having a comeback season, said he'll be ready come Sunday. ... Saleh praised the team's improving offensive line, but said LT Mekhi Becton will play when he eventually returns from a knee injury. “Mekhi is special," Saleh said. "So when Mekhi gets back and he gets ready to roll and he’s ready to play a full game, you don’t want to keep him off the field.”