Julio Jones, A.J. Brown, among 6 Titans out vs NY Jets 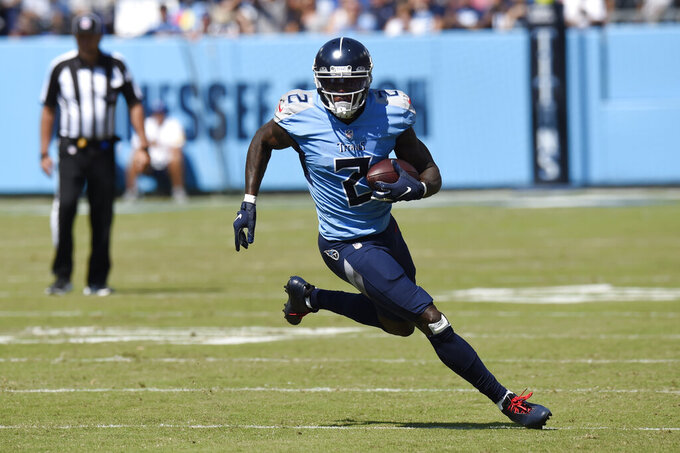 Tennessee Titans wide receiver Julio Jones carries the ball against the Indianapolis Colts in the first half of an NFL football game Sunday, Sept. 26, 2021, in Nashville, Tenn. (AP Photo/Mark Zaleski)

The Titans declared both of the Pro Bowl receivers out along with outside linebacker Bud Dupree, who didn't play despite being dressed last week against the Colts. Also out is three-time Pro Bowl punter Brett Kern and rookie cornerback Caleb Farley.

Defensive lineman Larrell Murchison was among those ruled out before the Titans placed him on injured reserve later Friday. The Titans also signed outside linebacker Sharif Finch and defensive lineman Woodrow Hamilton from the practice squad.

Titans coach Mike Vrabel said earlier this week the Titans would have a lengthy injury list, and running back Jeremy McNichols became the 14th on the injury report Friday when he was limited at practice by a hamstring issue.

A hamstring injury limited Brown to eight snaps last week against Indianapolis, while Jones played half of the offensive snaps. He has been on the injury report with a hamstring, and Jones was limited to nine games last season playing with a nagging hamstring injury in Atlanta.

Tight end Anthony Firkser could be back after missing the last two games, and wide receiver Marcus Johnson may be activated from the injured reserve list in time to play Sunday.