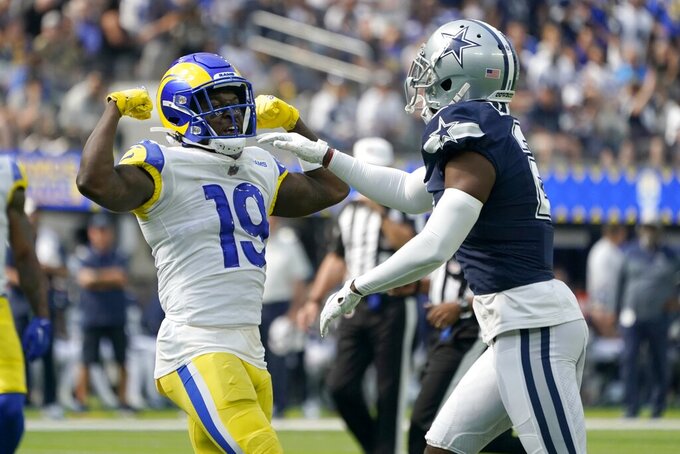 LOS ANGELES (AP) — The Los Angeles Rams have the least productive rushing offense in the NFL. No quarterback in the league has been sacked or pressured more times than Matthew Stafford.

Nobody needs advanced analytics to determine that the Super Bowl champions' offensive line is failing. The problems were obvious on practically every offensive snap in Los Angeles' 22-10 home loss to the Dallas Cowboys on Sunday.

And if the Rams (2-3) don’t figure it out up front soon, their entire season is at risk.

The big men themselves understand they look like the weak link after another week of struggles in basic areas for a team that had one of the NFL's best offenses last season and for much of coach Sean McVay's tenure.

That's why right tackle Rob Havenstein, a team captain and the second longest-tenured player on the Rams' roster, led a linemen-only meeting after Monday's film session.

“I'd say we've lost a little bit of our foundation of the success we've had over the years," Havenstein said. "Whether it's communication, effort, technique, I think some of that has been slipping. There was a handful of plays yesterday that just can't happen. It's inexcusable stuff.

"The only good thing is it's early enough in the season where we can get back to work and write the script the way we want to write it, but that's a mindset thing we've got to change, and we've got to do it, starting today."

The practical reasons for the Rams’ O-line problems are obvious: After two starters from last season's championship team departed, the three first-stringers and their top two backups on the interior line have all had significant injury absences, leaving Los Angeles to play third- and fourth-stringers at left guard, center and right guard.

That’s no excuse to Havenstein, who knows the Rams’ success depends on the entire line’s improvement.

Stafford has taken 21 sacks this season after the Cowboys dropped him five times. Only Indianapolis' Matt Ryan has been sacked that many times through five games, and while Stafford's health still appears to be solid, it's dangerous to allow a 34-year-old quarterback to receive that many big hits.

Stafford also lost two fumbles while being sacked by Dallas, and he threw his seventh interception of the season. He has 11 turnovers this season — well behind Ryan's league-leading 18, but still not good.

According to Next Gen Stats, Stafford has been pressured a league-high 73 times in five games. That's more than Carson Wentz (71) or Ryan (64). Stafford is facing only the fourth-highest pressure percentage at 34.3%.

“It’s our job to make sure guys aren’t in his face,” Havenstein said. “That pretty much falls exclusively on us, and we have to do a much better job. I think that comes down to a mindset thing. Physical mistakes are going to happen, but our mindset the last couple of games hasn’t been right. That’s something we’re going to address at practice.”

Aaron Donald and the Rams' defensive line are playing solidly despite the Cowboys' 163 yards on the ground, with roughly a third of that coming on one TD run by Tony Pollard. Donald had two sacks and lined up extensively as an edge rusher, while A'Shawn Robinson and Greg Gaines were stout up front.

There's no easy solution to the Rams' offensive line woes. Although they recently signed NFL veterans Oday Aboushi and Matt Skura for depth, the Rams have mostly played returning players who know the team's schemes. Those incumbents aren't getting the job done, and it might be time to give the new guys a shot.

Tutu Atwell's first NFL reception was a beautiful 54-yard grab. The downside is that the Rams' second-round pick in the 2021 draft didn't make his first NFL catch until the fifth game of his second season. Los Angeles needs more out from a rare high draft choice — who, as many Rams fans will tell you, was chosen six picks before outstanding Kansas City center Creed Humphrey — but at least Atwell finally showed he has something to give.

Allen Robinson's lack of impact on the Rams' offense has gone from a light joke to a serious problem. The prized free-agent acquisition had three catches for 12 yards on five targets against Dallas, and he's caught only 12 passes for 107 yards in five games. Stafford rarely appears to look his way, and Robinson hasn't done much with his few catches.

Edwards didn't finish the game after being evaluated for a concussion in the second half following a hit to the head. He didn't play the previous week against San Francisco after reporting possible concussion symptoms.

312 — The Rams' total net yards rushing this season after getting 38 against Dallas. That's the fewest in the NFL and far below the usual production in McVay's offenses. LA is also dead last with 62.4 yards per game, and its 3.2 yards per carry are 31st, leading only Tampa Bay (3.1).

A visit from struggling Carolina (1-4) six days after Matt Rhule's firing and with P.J. Walker under center right before LA's bye week is a golden opportunity for the Rams to get better. If they waste it, they'll be in an enormous hole.