LA Rams on track for playoffs with tough, short week ahead 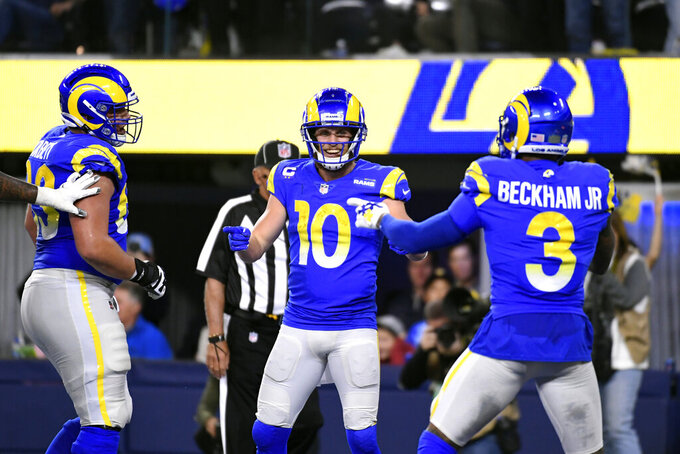 LOS ANGELES (AP) — Beating the Seattle Seahawks at home with a depleted roster was probably the easier part of this nightmarish week for the Los Angeles Rams.

Facing the Vikings on the road and on four days' rest with several key contributors possibly still missing will test the Rams (10-4) even more extensively. They'll attempt to wrap up a playoff spot at Minnesota despite losing dozens of players to the reserve/COVID-19 list at various points of the past several days.

With their 20-10 win over the Seahawks on Tuesday night, the Rams are in solid postseason position with the same record as the NFC West-leading Cardinals — Arizona holds the tiebreaker — and a two-game lead atop the wild-card standings.

Los Angeles beat Seattle by making multiple game plans for availability, relying on its healthy stars and doing just enough to hang on down the stretch.

“Certainly wasn’t the prettiest or the cleanest, but I think it was a statement from the guys to bond together and make enough plays to get it done,” coach Sean McVay said Wednesday morning while he drove to the Rams’ training complex and tried to figure out how to hold anything resembling a practice this week, given their COVID-19-depleted roster and a forecast of heavy rain in Ventura County, where the team doesn’t have a covered practice field.

If the Rams want to get their first-ever home postseason game at SoFi Stadium, they'll have to keep winning so they can pass the Cards. Los Angeles gets only four days between games, thanks to the rescheduling of the Seahawks game.

It's not much, but the Rams will try to make it work. They got a boost Wednesday when right tackle Rob Havenstein, backup linebacker Ogbo Okoronkwo and defensive back Terrell Burgess returned from the reserve/COVID-19 list.

“Now we’ve got to figure out the logistics of this week,” McVay added. “It’s basically like kind of a modified (Sunday to) Thursday approach. Guys are going to have to turn over their bodies quickly. We’re having to reshuffle a lot of the facilities to make sure that we accommodate all the things with safe protocols. We are flying and trying to make sure we’re handling all the things that are necessary in the meantime.”

The Rams' defense harassed Russell Wilson into one of the worst games in his decade-long NFL career, holding him to a passer rating of 55.3 with 156 yards, no TDs and a game-sealing interception. Los Angeles sacked Wilson three times — one apiece for Aaron Donald, Von Miller and Leonard Floyd — and kept him uncomfortable in the pocket throughout the night. Wilson isn't at his peak this season, but a good game plan well executed was a welcome sight for LA's inconsistent defense.

Finishing drives, which remains surprising for the fifth-highest scoring team in the league. LA has 35 touchdown passes by Stafford, but just eight rushing touchdowns in 14 games. The Rams are in the middle of the NFL pack in red zone efficiency despite their 27.6 points per game, getting a bigger portion of their scores on big plays. LA drove into Seattle territory four times in the first half, but scored only three points. With better play-calling and execution close to the goal line, the Rams could be an offensive powerhouse.

Sony Michel produced 92 yards on 18 carries, boosting the Rams' inconsistent running game with another performance in which he was superior to the banged-up Darrell Henderson. Michel continues to make a compelling argument to get the majority of LA's carries down the stretch.

Several backups forced into action by COVID-19 woes showed why they're backups. Bobby Evans was tenacious but inconsistent at right tackle when forced to play right tackle with almost no preparation, while cornerback David Long Jr. badly missed a tackle on Seattle's only TD drive that demonstrated why he hasn't fulfilled the confidence shown in him by the Rams' coaching staff after being anointed for a larger role this season.

The Rams have no significant week-to-week injury problems, McVay said. A short week of recovery and a flight to frigid Minnesota could change that.

1,964 — Calvin Johnson's single-season NFL record for yards receiving, set in 2012 with Stafford throwing most of the passes. Kupp would have to average 170 yards in each of the next two games to break Megatron's record within 16 games.

The Rams will get to spend Christmas morning with their families before a long evening flight to the Twin Cities. A win over the Vikings would clinch a playoff berth for LA and keep the pressure on Arizona for the NFC West title. A loss doesn't seriously damage their playoff hopes, but could allow the pursuing wild-card pack —most dangerously San Francisco, which visits SoFi next month — to get closer.