Late-season surge has Jets sitting in No. 2 spot in draft 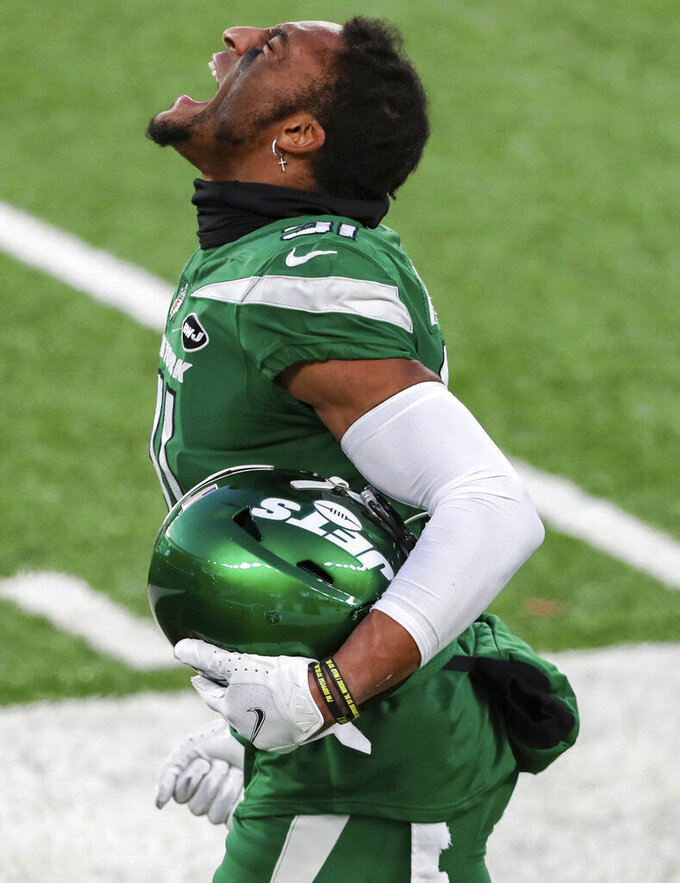 New York Jets cornerback Blessuan Austin (31) reacts late in the fourth quarter as the Jets record their second victory of the season in an NFL football game against the Cleveland Browns, Sunday, Dec. 27, 2020, in East Rutherford, N.J. The Jets won 23-16. (Andrew Mills/NJ Advance Media via AP)

NEW YORK (AP) — The New York Jets are No. 2 — in the NFL draft in April — after two late-season victories. And, stunningly, in a row.

This little winning streak has the players feeling pretty good about how they're ending things during a year when nothing seemed to go right for the first 13 games.

“I think that's kind of human nature where you always kind of think, what if we could've put it together earlier?” wide receiver Jamison Crowder said. "There were some games early that I feel like we should've won, at least two or three. It's just one of those years, man, where things didn't really bounce our way.

“For some reason, these last two weeks, things have kind of gone our way. So, we're just going to ride this wave and try to prepare for next week and hopefully get another victory.”

Some frustrated fans, however, would argue that things are worse now than when the Jets were 0-13.

That's of course when New York was sitting at No. 1 in the draft and the frontrunners for Clemson quarterback Trevor Lawrence, far and away the jewel of this year's class. And a player many consider a generational-type talent.

Instead, the Jets squeaked out a 23-20 win over the Los Angeles Rams last week and then clinched the second spot in the draft — behind 1-14 Jacksonville — with a 23-16 victory over the Cleveland Browns.

“I'm happy for our guys,” coach Adam Gase said. “They put so much effort into this and have not allowed the outside noise to waver them.”

The Jets are preparing for their final game Sunday at New England, and it is also expected to be the last for Gase as coach. He's 9-22 in his two seasons in New York and all indications point to the team moving on.

A coaching search will be on tap for general manager Joe Douglas and CEO Christopher Johnson, with what they do with the No. 2 pick a primary factor in who'll come in to lead the team.

While taking Lawrence is out of the picture, the Jets will have options. They can keep Sam Darnold as their quarterback and take Oregon offensive tackle Penei Sewell to team with Mekhi Becton — and provide two big building blocks up front. New York could try to trade Darnold and use the second pick on Ohio State quarterback Justin Fields or BYU's Zach Wilson. Or Douglas could trade down and collect more picks to build around Darnold, or another QB.

It will all add up to an intriguing offseason for the Jets, who'd like to get one more victory before heading home for the winter.

The run defense. The Jets rank 10th in opponents' rushing average, allowing 108.4 yards per game. Cleveland came in without its top four wide receivers because of COVID concerns, so it was assumed the Browns would rely on its duo of Nick Chubb and Kareem Hunt. Both had touchdown runs, but couldn't do much else as Chubb had 28 yards on 11 carries and Hunt 11 on four attempts while New York stacked the box.

Stretching the field. Darnold completed one pass for over 20 yards in the air, and that was a 30-yard touchdown toss to Crowder. He also had a 25-yard throw to Crowder, but that was a short pass that the wide receiver turned into a long gain. The game plan against the Browns appeared to include short, high-percentage throws — and it mostly worked. But the Jets need a consistent vertical threat. For the record, the Jets' longest completion Sunday? A 43-yard touchdown pass to Braxton Berrios — from Crowder.

Tarell Basham. The outside linebacker had five tackles, a sack, three quarterback hits and two forced fumbles against the Browns. He's tied for second on the team with three sacks, including two strip-sacks, and has three forced fumbles this season while creating a role for himself.

“He's been our guy who's like our Energizer Bunny,” Gase said. “Whether it's at practice or whether it's in a game, he's always the one who's trying to juice everybody up. And he tries to play that way.”

Sam Ficken. The kicker returned last week from a three-game absence because of a groin injury and went 2 for 2 on field goals and made his three extra points. But against Cleveland, Ficken had a 50-yard field goal attempt blocked, and an extra point tipped away, costing the Jets four potential points.

RB Frank Gore has a bruised lung that Gase said will keep the third-leading rusher in NFL history out of the season finale. The 37-year-old Gore, who became the third player to run for 16,000 yards, was hurt in the fourth quarter. ... OL Josh Andrews has a groin injury. ... CB Javelin Guidry continues to rehabilitate a knee injury. ... Gase thinks TE Ryan Griffin, on the reserve/COVID-19 list after being a close contact of someone who tested positive, should return to practice this week.

3 — That's how many consecutive games Darnold has without a turnover, a career-best streak.

The Jets will head to New England looking to end the season on a three-game winning streak. That would give them just the second 3-13 finish in team history, joining the 1995 squad. They have never gone 2-14.