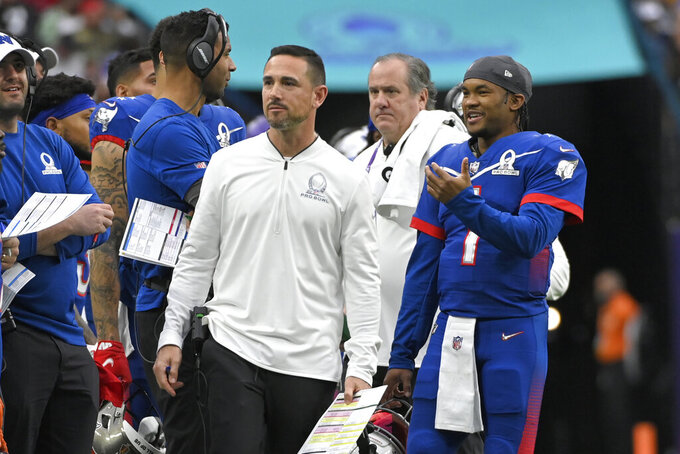 NFC quarterback Kyler Murray (1), of the Arizona Cardinals, reacts next to NFC head coach Matt LaFleur, center, on the sideline during the first half of the Pro Bowl NFL football game against the AFC, Sunday, Feb. 6, 2022, in Las Vegas. (AP Photo/David Becker) 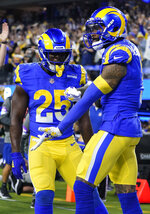 A $2 million grant is being provided to Los Angeles communities through funding from the NFL Foundation, the Los Angeles Super Bowl Host Committee, the LA84 Foundation, and the Play Equity Fund.

Each grant will support the Champions Live Here initiative, which has shined a spotlight on the achievements of 56 local organizations focusing their work on youth development, jobs and economic opportunity, and social justice.

The Legacy Program has awarded each of the selected organizations a $10,000 grant; a professionally produced vignette-style video spotlighting the organization; and supplied recognition for their work in the lead-up to the Super Bowl. Six of these 56 organizations were selected in December to each receive a total grant award of $50,000 to make an even bigger impact in their community.

“The Super Bowl 56 Legacy Program will expand the work of a variety of partners who are committed to finding solutions to the challenges that exist for kids in under-resourced communities,” said Renata Simril, president and CEO of the LA84 Foundation. “These are challenges every city faces, but they aren’t insurmountable if we work together. The NFL has dedicated resources to support unsung heroes who are making the Los Angeles region better, and is shining a spotlight on their work to inspire others to join in. This partnership will bring play and sports to neighborhoods where kids don’t have the chance to play, to address the play equity gap and make these young lives better. That’s the real legacy of Super Bowl 56.”

Off the Field, the official NFL players’ wives association, and Hall of Fame Health are partnering to help with health care for families.

Hall of Fame Health, which launched two years ago, seeks to bring world-class health care solutions and services to those in the football community. Its focus is not only on former players but on wives, children and other family members or dependents.

A 16-year-old organization, OTF seeks to empower its more than 12,000 members nationwide by creating opportunities to impact communities across the United States through philanthropic endeavors that focus on families.

Hall of Fame Health offers a concierge service; partnerships with health systems and medical groups; assistance on insurance and benefit issues; and a comprehensive behavioral health network with providers across all levels of care.

“I’m looking forward to this much-needed partnership to ensure NFL wives are getting the most value from our benefits,” said Rachel McKenzie, OTF president and wife of 11-year NFL veteran Mike McKenzie. “Together, we will help reduce time spent with the intricacies of disability benefits and much more.”

With one of the NFL’s most diverse front offices, the Cleveland Browns have received the inaugural John B. Wooten Award for workplace equity and inclusion.

The team was honored by the Fritz Pollard Alliance, a nonprofit organization comprised of scouts, coaches and league front office personnel along with other sports professionals committed to equal opportunity in the industry.

An offensive lineman with the Browns from 1959-1967, the 85-year-old Wooten is the former chairman of the alliance.

The team was presented with the award Thursday in Los Angeles.

“Diversity, equity and inclusion are priorities for us,” said Browns executive vice president and general manager Andrew Berry, one of seven Black GMs in the league. “We are deliberate in hiring and developing people who come from different backgrounds and have different perspectives. We believe success in the NFL comes from good people and good people come from all walks of life.

“We appreciate the recognition and look forward to continuing the work.”

The Browns have taken an active approach in filling business and football operations departments with multiple fellowships and minority hires in the past few years. Berry filled two pertinent positions by hiring Glenn Cook, the team’s vice president of player personnel, and Kwesi Adofo-Mensah, the team’s former vice president of football operations who was recently hired as Minnesota’s GM.

Also, Browns coach Kevin Stefanski hired Callie Brownson as his chief of staff before promoting her to assistant coach -- one of the few female assistants in the league.

Deebo Samuel’s 2021 accomplishments are enough for anyone to be proud of, yet one failing is still stuck in his mind.

San Francisco’s third-year wideout and 2021 All-Pro selection had an NFL-record eight rushing touchdowns for his position, as well as over 1,400 receiving yards this season. Because the Los Angeles Rams beat the 49ers in the NFC championship game, Samuel will sit idly on Sunday.

“I still ain’t over it yet,” Samuel said. “I started thinking about it again when I walked in here like, ‘Man, we should be here.’ But it is what it is.”

Speaking with AP podcast host Rob Maaddi, Samuel said he was a fan of the added workload coach Kyle Shanahan threw his way.

“I really enjoy it because me, personally, I feel like I’m very dangerous whenever I have the ball in my hands,” Samuel said. “That’s why I really like it a lot.”

No matter who’s under center in 2022, Samuel has confidence in either option.

“But like I stated a while ago, I have all the trust and belief in Trey Lance to be the guy that we need.”

Green Bay coach Matt LaFleur is the repeat winner of the EdjSports Coach of the Year award.

The analytics company ranks coaches based on how they handle fourth-down calls and other decisions with its Critical Calls Index, as well as a power ranking of the performance by teams to come up with a season-long ranking.

LaFleur ranked eighth in the Critical Call Index and third in the power ranking to claim the top overall spot ahead of Indianapolis’ Frank Reich. The only other coaches to finish in the top 10 in both categories were Reich, Kansas City’s Andy Reid and Buffalo’s Sean McDermott.

Chargers first-year coach Brandon Staley got the top spot in the Critical Calls Index after his aggressive season going for it on fourth downs.

The shoe laces Los Angeles Rams running back Sony Michel will wear in Sunday’s game will be donated to be made into two bracelets.

Rastaclat founder Daniel Kasidi will make the bracelets. One will be given to Michel and the other will be auctioned off, with proceeds benefiting the Los Angeles Boys & Girls Club.

“I am excited to partner with Rastaclat and give back to the Los Angeles community in a cool and creative way,” Michel said in a statement. “It is incredible that Rastaclat changes something as simple as my football cleat laces into a work of art. I am looking forward to a great partnership with the company.”

Bengals tight end C.J Uzomah is willing to celebrate in an unusual fashion if Cincinnati wins the Super Bowl.

Uzomah said Thursday he was on the “Pardon the Take” podcast and when the host said he would take a bath in Cincinnati’s famous Skyline chili if the Bengals won, Uzomah joined in.