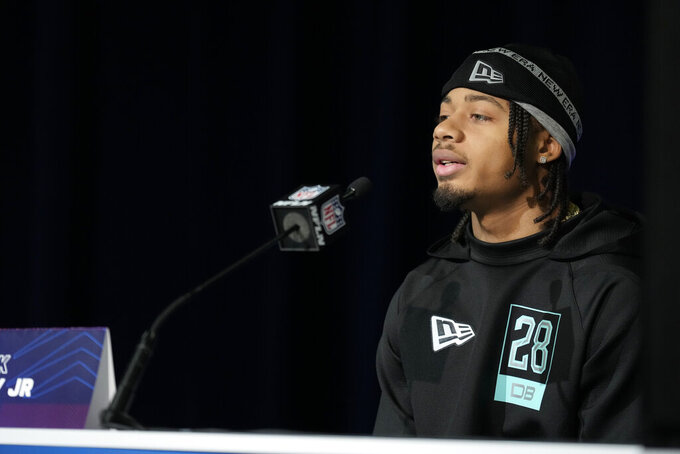 INDIANAPOLIS (AP) — LSU star cornerback Derek Stingley Jr. said Saturday that he isn't working out at the NFL's scouting combine because he's still on the mend after tearing a ligament in his left foot last fall.

Stingley provided the specifics of his injury for the first time since getting hurt ahead of the Tigers' Week 4 game against Mississippi State. He said he underwent surgery Sept. 29 for a Lisfranc injury and was told rehab would take four to six months.

Stingley said he's still working his way back to full speed and he expects to be a full participant at LSU's pro day April 6.

“My rehab is ahead of schedule right now,″ Stingley said, adding, "I’m on pace to do what I have to do at pro day.″

“Right now getting into running, starting to do a couple plants, breaking downhill, that’s really where I’m at,” said Stingley, the grandson of Darryl Stingley, a former wide receiver whose NFL career ended at age 26 when he was left paralyzed from a hit by Jack Tatum in a 1978 preseason game.

Derek Stingley had six interceptions and broke up 21 passes as a true freshman in 2019 and was named second-team All-America, first-team All-SEC and SEC Newcomer of the Year.

He didn't pick off any passes in the pandemic-shortened 2020 season or in the three games he played last year before he aggravated an injury he sustained in preseason practice.

That hasn't prevented talent evaluators from projecting him as a top six or seven pick in the April 28 NFL draft.

Stingley said no teams have expressed concern about his foot during interviews at the combine. He said he's telling them he's the best cornerback in the draft despite his foot injury and if they draft him they'll be getting the player who burst onto the college scene to such fanfare in 2019.

“Because I know myself," Stingley said, “and I know that when I’m at the best version of myself I’m the greatest.”