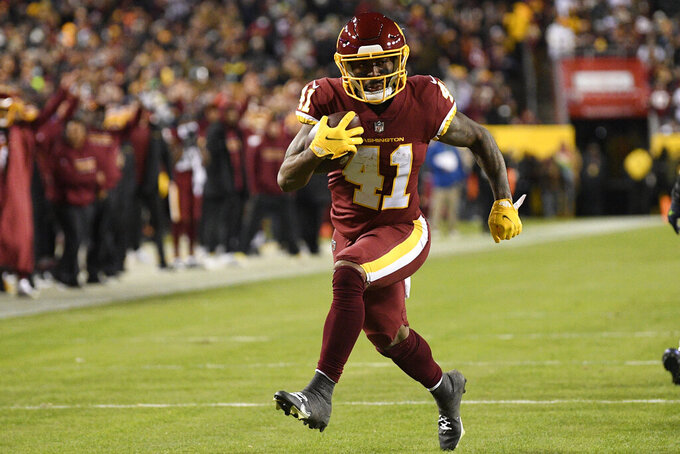 FILE - Washington NFL football running back J.D. McKissic (41) runs with the ball during the first half of an NFL football game against the Seattle Seahawks, Monday, Nov. 29, 2021, in Landover, Md. The rollercoaster offseason for the Washington Commanders took a few more twists Wednesday, March 16, 2022, a week after the stunning move to acquire Carson Wentz. After agreeing Tuesday to sign a $7 million, two-year deal with the Buffalo Bills, running back J.D. McKissic reversed course and decided to return to the Commanders under the same terms, according to a person with knowledge of the move. (AP Photo/Nick Wass, File)

After signing a deal to return to Washington, Cornelius Lucas is looking forward to meeting Andrew Norwell, among other things.

Lucas re-signed Thursday to be part of the Commanders’ revamped offensive line in front of new starting quarterback Carson Wentz. The group includes Norwell at left guard after Ereck Flowers got released and potentially Wes Schweitzer on the other side after 2020 All-Pro Brandon Scherff left for Jacksonville.

“We won’t have those guys next year, so we’ve got to find replacements for them and that’s what every season boils down to,” Lucas said after signing a two-year contract. “I think we’re going to be ready. Coach (John) Matsko is going to have us ready to go. I’m not worried about it.”

Lucas spent the past two seasons with Washington, starting 15 games and appearing in 29 over that time. He is again expected to be the team’s third tackle, with Charles Leno and Sam Cosmi penciled into starting spots, but injuries have shown his value at stepping in and performing at a high level.

Months after saying he wanted commitment and to be wanted, the soon-to-be 31-year-old found that with his fifth NFL team. Others showed interest, but only the Commanders ponied up in free agency.

“I feel like I picked up a good amount of traction: more than I had in the past,” Lucas said. “But everybody was fakin' and booty shakin’. Washington was the only one that came through.”

The same happened for Norwell, who played for coach Ron Rivera and Matsko with the Carolina Panthers early in his pro career before joining the Jaguars. Washington moved quickly to add Norwell after cutting Flowers and others to save salary cap space.

Norwell knows a thing or two about developing chemistry on an offensive line and is eager to begin that process.

“(It starts with) just working together, trusting each other and being one,” he said Wednesday. “We’ve got to all be on the same page, and that starts with the center making the right calls and just everybody playing as one. Just having that glove mentality and how it feels right and just work hard and give it your best every day.”

Norwell and Wentz — acquired in a trade from Indianapolis — are new, while Lucas is back along with running back J.D. McKissic, who initially agreed to sign with Buffalo. McKissic was surprised Washington didn’t make him a contract offer before he chose the Bills but then reversed course to stay once the front office made it clear he was wanted back.

“You can’t ask for a better organization to be chosen by,” McKissic said, referring to Buffalo. “But I had unfinished business in Washington. The way we left off, I felt like we were inclining. With my injury, I had things I wanted to prove in Washington.”