Malik Willis' act of kindness makes him darling of combine 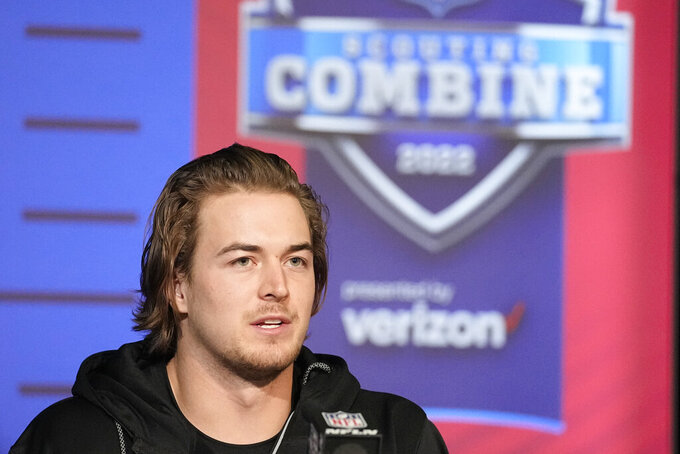 INDIANAPOLIS (AP) — Malik Willis has quickly become the darling of the 2022 NFL scouting combine, turning heads with his impressive showing both on and off the field.

He showed off an exceptionally strong arm on deep throws and pinpoint accuracy on intermediate passes during the quarterbacks' prime-time workouts at Lucas Oil Stadium on Thursday night.

And a video posted by Twitter user Ryan Lacey surfaced showing the former Liberty QB giving some of gear from his swag bag to a homeless woman outside the Indianapolis Convention Center.

After he wowed observers with his workout, Willis explained on the NFL Network broadcast, “I walked past her on the way to the Nike suite and I chopped it up with them and I walked out with a suitcase and whatnot. And I felt bad because I saw her son. It was a pregnant lady and she was homeless.

Willis didn't know anybody was watching his spontaneous act of kindness.

The viral video had been viewed nearly 2.5 million times as of Thursday night.

Willis threw for 2,857 yards and 27 touchdowns in 2021 and he rushed for 878 yards and 13 TDs in his 13 starts. He has gained traction on mock draft boards since his solid showing at the Senior Bowl when he powered through bad weather to show off his strong arm and flashed his mobility.

Willis also had an engaging media interview session at the combine Wednesday when he displayed a mix of subtle humor and a down-home humility.

Asked if he felt he should be the first quarterback off the board at the NFL draft next month, Willis replied, “I think so. But I don't make those decisions. I hate that for me.”

Georgia running back James Cook is a much different style of running back than his older brother, Dalvin Cook of the Minnesota Vikings.

Both are powerful runners, but the elder Cook is more of a straight-ahead back while James is a one-cut back who explodes past defenders with more jukes and moves.

He looks forward to the day the brothers face each other in the NFL.

What if the Vikings draft him?

That would be a blessing, James Cook said, “but they’ve already got a guy.”

James Cook skipped the Senior Bowl after helping the Bulldogs win the national championship, but he said Thursday it wasn't just so he could focus on running an elite 40-yard dash in Indianapolis.

“So, I feel like I can showcase my talent at the combine.”

The answer is at hand for former Pitt quarterback Kenny Pickett, whose right hand measured at 8½ inches Thursday at the NFL scouting combine.

That would be the smallest of any quarterback in the NFL right now, bumping Taysom Hill of the New Orleans Saints, whose hands were measured at 8¾ inches before the 2017 draft.

Like Bengals backup QB Brandon Allen, who increased his hand measurements by three-eighths of an inch at the 2016 combine after checking in at 8½ inches at the Senior Bowl, Pickett had been doing hand exercises to widen his measurement at the league's annual gathering of top college prospects.

“The reason why I didn’t measure at the Senior Bowl was to have those extra couple weeks,” Pickett said Wednesday. “Just a common sense thing, having more time to work the exercises. ... Whatever it measures, it measures.”

Pickett, a 2021 Heisman Trophy finalist and Johnny Unitas Golden Arm award winner, is considered a first-round draft pick. He or Liberty's Malik Willis are seen as the top two QBs this year.

Pickett said his hand size hasn't been a topic of conversations with teams this week.

When Joe Burrow's right hand was measured at 9 inches at the combine two years ago, he joked on Twitter: “Considering retirement after being informed the football will be slipping out of my tiny hands. Keep me in your thoughts.”

Although Burrow reached the Super Bowl in his second season after going first overall to the Bengals in the 2020 NFL draft, a quarterback’s hand size can be a deal breaker, especially for teams that play outdoors where the weather can get nasty because it could make it harder to hold onto the football.

Former Ole Miss star quarterback Matt Corral isn't throwing at the combine as he works his way back from a high ankle sprain sustained in the first quarter of the Sugar Bowl.

Corral, who plans to fully participate in the Rebels' pro day on March 23, said he was going to have to impress teams with his football IQ in Indianapolis.

“Teams need to know that I understand the game of football," he said. "I wanted to make it a point. It's definitely something I wanted to show that they knew the ability I had in my head and not only my physical ability, but mental ability as well.”

Corral said it's not easy sitting out while watching the other quarterbacks show off their arms and accuracy.

“This has been my dream since I started playing football. I'm here with the best of the best. Now I'm not able to perform physically, but I definitely can show the teams what I know mentally,” he said. “It does absolutely kill me. I'm itching to get back out there. About 2½ weeks ago, I started running and throwing with no pain. I just thought it would be smart to sit out. If I wanted to put my best foot forward, just wait until my pro day.”