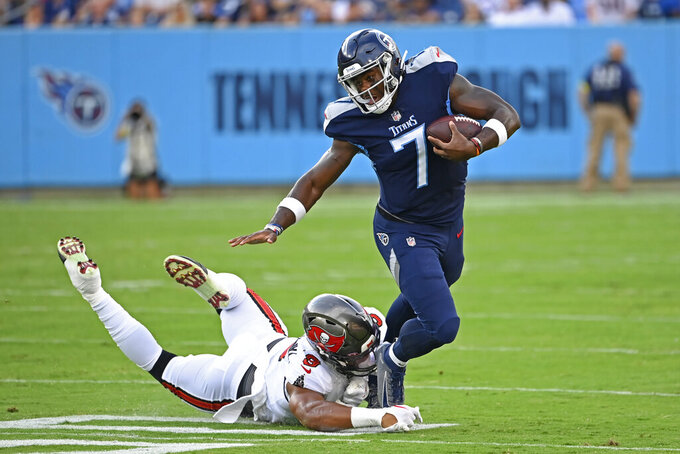 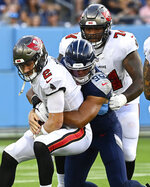 NASHVILLE, Tenn. (AP) — Malik Willis promises he's harder on himself than coaches ever can be. Luckily, the Tennessee Titans are seeing the rookie quarterback improve.

The big question for the Titans remains whether Willis grows fast enough to back up veteran Ryan Tannehill and keep them from keeping a third quarterback on the roster this season.

Willis threw the first touchdown of his NFL career and the Titans beat the Tampa Bay Buccaneers 13-3 Saturday night in their exhibition home opener.

Titans coach Mike Vrabel said Willis got the ball out quicker than in their opening loss to Baltimore and improved in some areas.

“It’s hard to run out of the back of the pocket in this league. It's hard," Vrabel said. "So we’re just going to continue to coach him to try to step up and find guys that can help him. And then when there are opportunities to create plays, try to do that as well.”

The Titans (1-1) gave Willis a second straight start, and he showed more patience by staying in and moving around the pocket. Willis still was sacked three times while playing a series into the third quarter. Willis said he felt more comfortable, though the key is making sure he stays in the pocket when he can rather than use his legs to run.

“It's understanding when and when not to, and that's the biggest thing,” Willis said. “That’s why I’m a little disappointed myself for tonight, and I think I got a little bit too much. But it’s a growing process, and it’s my second preseason game, I’m not going to be too hard on myself in that regard.”

Willis also had nearly as many runs as completed passes yet again. He ran five times for 42 yards with a long of 24 yards to set up the first field goal and was 7 of 17 for 80 yards passing with a 75.6 passer rating. He capped Tennessee's final drive of the first half by finding fellow rookie Chig Okonkwo with a 6-yard pass for the first TD of both their pro careers.

Veteran Ryan Succop, trying to hold off Jose Borregales, sneaked a 52-yard field goal over the crossbar late in the third quarter for the Bucs (0-2).

Tannehill, Derrick Henry, All-Pro safety Kevin Byard and Pro Bowl defensive lineman Jeffery Simmons all wore ballcaps instead of helmets among 10 Titans' starters sitting out. Rookie Nicholas Petit-Frere started at right tackle trying to beat out Dillon Radunz for the job, then moved to the left side after veteran Taylor Lewan left.

Tampa Bay had 15 starters out led by Tom Brady out for a second straight preseason game in his personal break from the Bucs. Julio Jones, who took part in both joint practices against the Titans, watched from the sideline along with fellow receivers Mike Evans and Chris Godwin.

“We got a great look at a lot of young guys, so we can make educated decisions going forward,” Tampa Bay coach Todd Bowles said.

With so many starters out, the teams failed to convert their first nine third downs combined. The Titans outgained the Bucs 255-174 in total offense with Tennessee scoring 10 points off turnovers by halftime. Blaine Gabbert started and played the first two series going 3 of 5 passing for 13 yards.

Kyle Trask finished the game and threw for 105 yards. But he was intercepted just before halftime for a second straight week.

“Nobody played efficient on offense,” Bowles said. “We only had three points. So, you can’t just put it on the quarterback. There’s a lot of factors involved in that.”

The Titans have their punt returner in Kyle Philips. The fifth-round pick out of UCLA looked to make a rookie mistake by stepping back into the end zone to field his first punt, then slipped through for a 26-yard return. Vrabel said, “It’s easier to say, ‘Whoa’ than ‘Sic ’em.'”

Philips went 15 yards on his next opportunity. On his third chance, Philips made the first defender miss on his way to a 35-yard return.

Rookie punter Ryan Stonehouse is pushing three-time Pro Bowler Brett Kern thanks to his impressive hangtime on his punts. The Titans stepped up the competition by having Stonehouse hold on field goal attempts, and the rookie held for the two field goals and one extra point by Bullock. Kern handled the first two punts. Stonehouse also had a 68-yard punt and averaged 47 yards on four punts.

When Stonehouse bobbled a snap in the fourth quarter, the rookie picked up the ball and ran 24 yards for a first down.

Tampa Bay guard Aaron Stinnie, a former Tennessee player, was carted off the field late in the third quarter after hurting his left leg. Bowles did not have an update on Stinnie's status after the game. ... Titans safety Joshua Kalu hurt a groin muscle earlier in the third and didn't return.

Titans: wrap up the preseason hosting Arizona on Aug. 27.