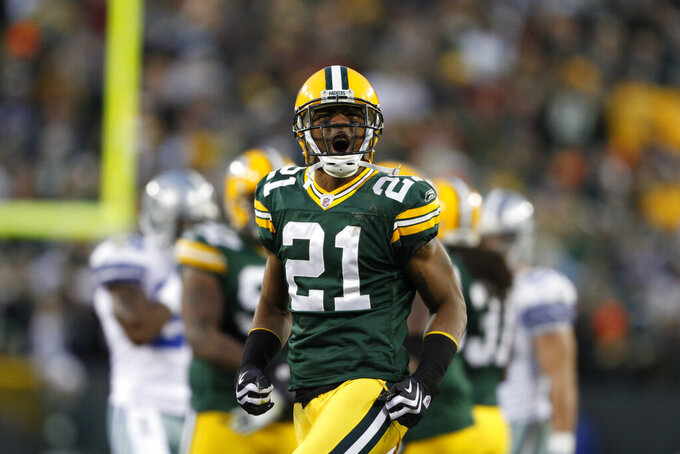 FILE - In this Nov. 15, 2009, file photo, Green Bay Packers' Charles Woodson reacts during the first half of an NFL football game against the Dallas Cowboys in Green Bay, Wis. Peyton Manning, Charles Woodson, Jared Allen and Calvin Johnson are first-year eligible players to make the list of 25 semifinalists for the Pro Football Hall of Fame’s class of 2021. (AP Photo/Jim Prisching, File)

Peyton Manning, Charles Woodson, Jared Allen and Calvin Johnson are first-year eligible players to make the list of 25 semifinalists for the Pro Football Hall of Fame’s class of 2021.

Joining them are four players who previously have been eligible, but never made the semifinals: Eric Allen, Willie Anderson, Cornelius Bennett and Rodney Harrison.

A player must be retired for five seasons before being considered for entry to the Canton, Ohio, shrine.

Candidates will be trimmed to 15 modern-day finalists who will be considered for entry by the selection committee during Super Bowl week in February. Inductions are scheduled for next August, when the 2020 class and a special centennial class also will be enshrined after the COVID-19 pandemic forced postponement of those ceremonies last summer.

Between four and eight new members will be selected.

Of the 25 semifinalists, several have been finalists in the past, including Boselli, Faneca, Holt, Lynch, Mills, Seymour, Thomas, Wayne and Young in 2019.

Manning, of course, is a record five-time league MVP and held several career passing records when he retired after 17 seasons; he missed 2011 with a severe neck problem. He played in three Super Bowls, winning two — one with the Colts and the other with Denver. He was a quarterback on the All-Decade Team of the 2000s.

Woodson, who played cornerback and safety with Oakland and Green Bay in his 18-year career, won a Super Bowl with the Packers, lost one with the Raiders, and made three All-Pro Teams. Woodson was the 1998 Defensive Rookie of the Year, and took top defensive player honors in 2009. He also made the All-Decade Team of the 2000s.

Defensive end Jared Allen had 136 sacks and twice led the league in his 12-year career for the Chiefs, Vikings, Bears and Panthers. He made four All-Pro Teams.

Johnson, nicknamed “Megatron,” was a dynamic receiver for nine seasons in Detroit, though he played for weak teams. He twice led the league in yards receiving and once in receptions with 122 in 2011, one of his two All-Pro years. Johnson made the All-Decade Team of the 2010s even though he retired after the 2015 season.