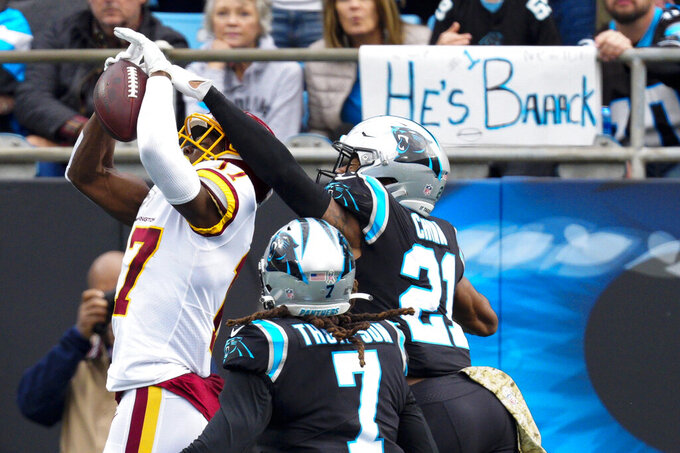 Terry McLaurin has already been Washington's best skill position player for his three seasons in the NFL.

McLaurin has shown in back-to-back victories that he's still getting better. Making five catches for 103 yards and a touchdown in a win at the Carolina Panthers was more evidence of McLaurin's continued improvement and the impact he can make on a game.

“When you see him one on one, you give him a shot,” quarterback Taylor Heinicke said. “He continues to make plays, and you just want to keep giving him shots.”

McLaurin has progressed significantly making contested catches. After taking a big hit on Washington's final drive in an upset of defending champion Tampa Bay, he did so again against Carolina and caught a 12-yard TD pass from Heinicke.

According to Pro Football Focus, McLaurin's 23 contested catches are the most in the league this season and more than the total number on 14 other teams.

“Not a lot of people know that was probably one of my glaring weaknesses in my game, especially in college,” McLaurin said. “The coaching staff expressed that to me. I started attempting to improve on that day in and day out. It was just an insatiable thing that I had to create if I wanted to play at this level.”

McLaurin has at least three catches in each game this season and is up to 735 yards receiving and five touchdowns. He has become Heinicke's go-to target in just about every situation.

“He continues to make plays and I’m glad that he’s on our team," Heinicke said.

McLaurin is still developing chemistry with Heinicke, the sixth QB he has caught passes from, along with Dwayne Haskins, Alex Smith, Kyle Allen, Case Keenum and Colt McCoy. The Ohio State product's mentality remains the same: Try to make every catch to instill confidence.

“I just try to put myself in a position to make those plays,” he said. “Be aggressive with my hands, trust them and come down with the play. It’s exciting."

Even the defense, at this point. Cam Newton and the Panthers had their moments against Washington, but coach Ron Rivera likes how his secondary is tightening up and staying on the same page. After plenty of talk about a lack of communication on that side of the ball, the unit is beginning to live up to preseason hype, even after losing reigning Defensive Rookie of the Year Chase Young to injury.

Antonio Gibson bounced back after losing a fumble in the Carolina game, rushing for 76 of his 95 yards after halftime. But it's still a problem Washington would like to get under control, with Rivera and his staff stressing the message on ball protection.

“We don’t want him worrying about the fumbling,” Rivera said Monday. “We want him to worry about protecting it, carrying properly the way he needs to. That’s what’s important.”

Rookie tight end John Bates is much more of a blocker than a pass catcher, but Washington has needed more out of him with Logan Thomas and Ricky Seals-Jones out with injury. Bates made a key catch on fourth down in the fourth quarter that Heinicke called the play of the day.

“I’m about to get blasted and I see him, and I know I have to give him a shot and he made a great play,” Heinicke said. “He stepped up big."

Rookie receiver Dyami Brown was only on the field for 13% of Washington's offensive snaps against Carolina and didn't get targeted. After looking dynamic in training camp and the preseason, the third-round pick has fallen behind veteran DeAndre Carter and others on the depth chart.

Center Tyler Larsen left the Carolina game with a knee injury, which forced guard Wes Schweitzer to play in the middle of the line as the snapper for the first time since 2019. Larsen was already replacing injured starter Chase Roullier.

Rookie right tackle Sam Cosmi, who had missed time recently with an ankle injury, left with a hip ailment. Washington is set there with veteran Cornelius Lucas.

Thomas (hamstring) and receiver Curtis Samuel (groin), who have been out, are candidates to return next week against Seattle.

Coaches and players get a little extra preparation time before facing Russell Wilson and the Seahawks on Monday night.