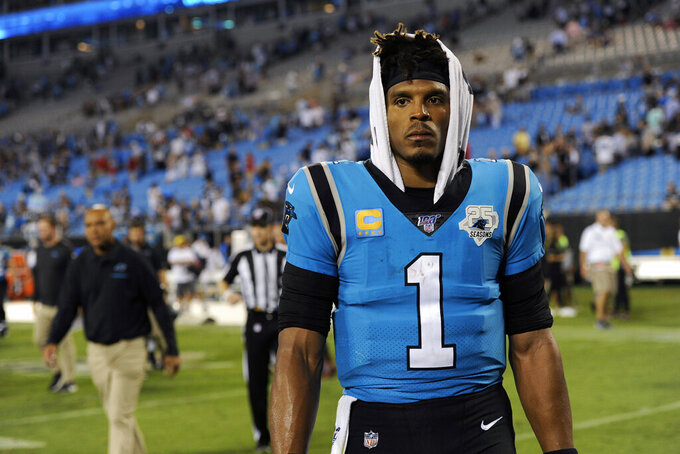 Newton did not practice Tuesday and Panthers coach Ron Rivera gave no timetable for his QB's potential return, saying "He's going to get his treatment, we'll see how he feels and we'll adjust to it as we go through it."

Rivera said backup Kyle Allen would make his second career NFL start for the Panthers against Arizona if Newton isn't able to play. Rivera said that means the Panthers (0-2) will have to circle the wagons with four of their next five games on the road.

"Does it change things (if Newton is out)? Yes, it changes things dramatically," Rivera said. "If we're going to go to end up going with Kyle for a while, yes, we have to find out who we are with him as the quarterback. And going on the road it is going to be a little bit of a challenge."

Rivera said he first learned that Newton's foot was sore after Carolina's 20-14 loss to the Buccaneers Thursday night, although he told reporters after the game "don't worry about the foot." After four days of rest and treatment, Newton reported to the team's headquarters on Tuesday morning but didn't feel ready to practice.

"He's going to do everything he can to get back out as soon as he can," Rivera said.

The 30-year-old Newton originally sprained his left foot in Carolina's third preseason game against the Patriots but returned to practice in time for the regular season opener. The Panthers have since stumbled to a poor start, losing to the Rams and Buccaneers at home.

Newton's lack of production has been a major reason why.

He ranks 31st in the NFL in passer efficiency rating (71) among qualifying QBs and has completed just 56 percent of his passes for 572 yards with no touchdown passes and one interception. As a runner, Newton hasn't been effective either, carrying five times for minus-2 yards with two fumbles, leading to some questions about his long-term future with the team.

Newton has not thrown or run for a touchdown in his last four games dating back to last season when he was plagued by shoulder injuries.

He joins a list of high-profile NFL quarterbacks who could be on the sideline this weekend.

Pittsburgh's Ben Roethlisberger (elbow) is out for the season, New Orleans' Drew Brees (hand) is out indefinitely, Jacksonville's Nick Foles (collarbone) is on injured reserve and Eli Manning of the New York Giants has been benched.

Panthers safety Eric Reid said if Newton is out any length of time he would "welcome" the team signing former 49ers teammate Colin Kaepernick, who remains a free agent. But Reid expressed little hope that would happen, reiterating that he feels league owners won't sign Kaepernick because of his stance on protesting racial and social injustice.

"The Panthers have not approached me about Colin, but I would welcome that," Reid said. "As you alluded to, there are a lot of quarterbacks around the league who are in need of a quarterback. Colin is sitting by his phone."

However, Rivera said he doesn't expect the Panthers to sign an experienced quarterback at this time, even though Allen and rookie Will Grier only have one career start between them.

"I don't think so," Rivera said. "The guys we have here, we brought them here for a reason."

Allen's only NFL start came in Week 17 of last season when he led the Panthers to a 33-14 win over the playoff-bound Saints, completing 16 of 27 passes for 266 yards with three total touchdowns.

"Kyle balled last year," said Panthers wide receiver Jarius Wright. "He came in fully committed to being the starting quarterback and he did his job. He also gave us a chance to do our jobs. Any time that happens you can live with that. It's that next man up mentality."