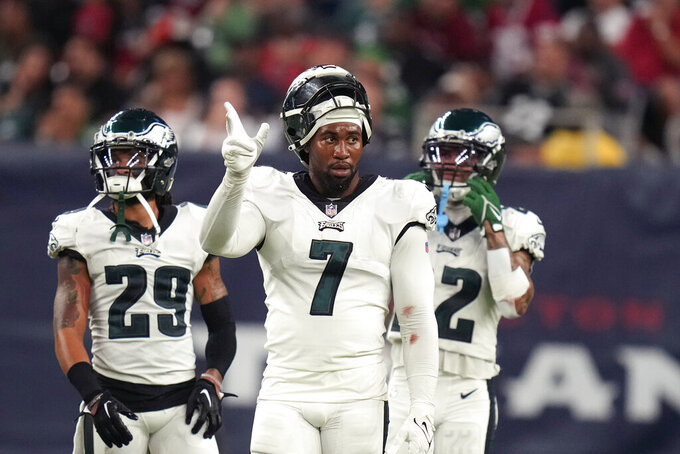 Philadelphia Eagles linebacker Haason Reddick (7) reacts in the second half of an NFL football game against the Houston Texans in Houston, Thursday, Nov. 3, 2022. The Eagles won 29-17. (AP Photo/Eric Christian Smith)

EAGLES PLAYER TO WATCH: QB Jalen Hurts has won 11 straight regular-season games, the longest active streak in the NFL. This season, Hurts has been giving defenses fits with his arm and his legs. Hurts has passed for 2,042 yards and 12 TDs and has run for 326 yards and six TDs this season. He’s thrown just two interceptions while accumulating a 107.8 QB rating, which is second in the NFL.

COMMANDERS PLAYER TO WATCH: Fifth-year pro Taylor Heinicke has provided a spark since taking over for injured QB Carson Wentz. In three starts, the 29-year-old has thrown for 629 yards and five touchdowns and rushed for 50 yards and a TD. Heinicke also had a costly fourth-quarter interception in last week’s 20-17 home loss to Minnesota that snapped a three-game winning streak. He has thrown three picks in his three starts and has a rating of 87.6.

KEY MATCHUP: Washington’s defensive line against Hurts. For the Commanders to have any chance of an upset, they will have to pressure and contain Hurts — something that defenses have not been able to do yet this season. Washington’s line is stout, with interior lineman Daron Payne and Jonathan Allen providing strong play up the middle. Payne has 5½ of the Commanders’ 23 sacks. Montez Sweat is a threat off the edge. Washington also could see the return of DE Chase Young, who hasn’t played since tearing the ACL in his right knee last Nov. 14. The 2020 AP Defensive Rookie of the Year, Young had 7½ sacks in 2020 and 1½ last season before getting injured against Tampa Bay.

KEY INJURIES: Young practiced with the team last week and was expected to be a full participant this week, though his status for Monday’s matchup remains in question. Also for the Commanders, LB Cole Holcomb (foot) has missed the past two games and WR Jahan Dotson (hamstring) has been out for the past five. Wentz must sit for at least one more game on injured reserve. He is progressing well from a broken right ring finger that required surgery.

STATS AND STUFF: Washington WR Terry McLaurin caught six passes for 105 yards in the first meeting between the teams on Sept. 25. He leads the team with 609 receiving yards on the season. ... Philadelphia’s defense has held opposing quarterbacks to a league-low 68.0 passer rating while accumulating an NFL-best 12 interceptions. S C.J. Gardner-Johnson tops the league with five interceptions. ... The Eagles have scored 60 points off their 18 takeaways. ... Philadelphia is off to its best start and is the 29th team in the Super Bowl era to begin 8-0. All 28 teams prior have made the playoffs. The 1972 Dolphins remain the only team to finish a season undefeated. The 2007 Patriots were 18-0 before losing in the Super Bowl.

FANTASY TIP: Eagles WR A.J. Brown is seemingly a good play every week. He caught four passes for 59 yards and a TD against the Texans last week to up his season totals to team-best receiving totals of 718 yards and six TDs.