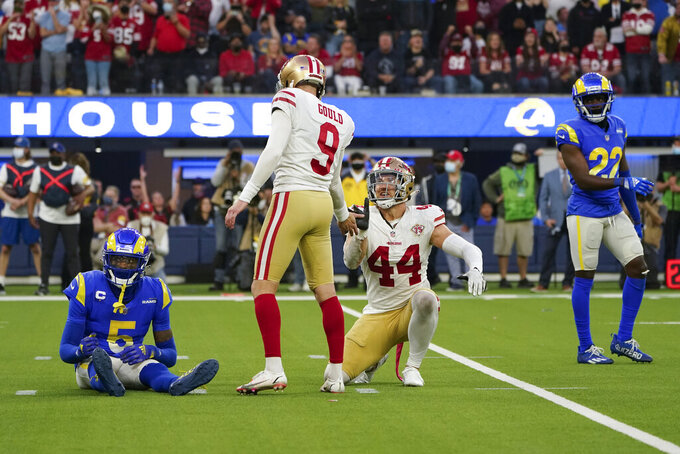 INGLEWOOD, Calif. (AP) — Jalen Ramsey wasn't in any mood to celebrate the Los Angeles Rams' first NFC West Division title since 2018, not after the Rams blew a 17-point, second-quarter lead.

Shortly after Seattle defeated Arizona — ensuring the Rams would capture the division — Matthew Stafford threw an interception to San Francisco's Ambry Thomas to wrap up the 49ers' 27-24 overtime victory.

Ramsey cut off a reporter in mid-sentence with a stern “nope” when asked if there was any silver lining to winning the division despite the loss.

If the Rams would have defeated the 49ers, they would have wrapped up the second seed in the NFC playoffs and would be hosting the New Orleans Saints. Instead, Los Angeles (12-5) fell to the fourth seed and will host Arizona on the evening of Jan. 17 in the third meeting of division rivals this season.

The Niners' season sweep of the Rams also propelled them into the postseason for the second time in three years.

Los Angeles looked to be reeling after three straight November losses put its record at 7-4 and two games behind Arizona for the NFC West lead. But the Rams won five straight coming into Sunday and dominated the first 28 minutes to take a 17-0 lead.

But the 49ers would rally back, dealing Sean McVay his first loss in 46 games, including the playoffs, in which the Rams led at halftime.

“Obviously you don’t want to take for granted the difficulty of winning the division title, but at the same time, a loss never feels good,” wide receiver Cooper Kupp said, who had seven receptions for 118 yards and a touchdown.

The Rams' loss will also continue to sow doubts about Stafford's ability to perform in big games. He was 15 of 16 for 153 yards and two touchdowns in the first half, but struggled after halftime, completing only six of 16 passes for 85 yards with two interceptions and a touchdown.

Los Angeles failed to even cross into San Francisco territory on its first three second-half drives. Stafford got back on track late in the fourth quarter with a 9-play, 92-yard drive, including a sensational 4-yard throw to Kupp in the back of the end zone to give the Rams a 24-17 advantage.

The Rams got the ball back with 1:50 remaining near midfield after the 49ers went three-and-out, but couldn't put the game away when three straight running plays netted five yards. Los Angeles punted and San Francisco drove 88 yards to send it into overtime.

While Stafford will get plenty of scrutiny, the team's run game struggled — only 64 yards on 27 carries and averaged 2.4 yards per attempt.

“We didn’t get any efficiency running the ball and then we were having trouble protecting,” McVay said.

Stafford has a division title for the first time in 13 seasons, but knows he is under scrutiny going into the postseason.

“I guess it’s nice. It means you get a home playoff game, but obviously would have rather won the game for sure," he said. "We’ve got a bunch of good leaders on this team, guys that are veteran players that have played in a lot of football games, so just got to come back and play better next week.”