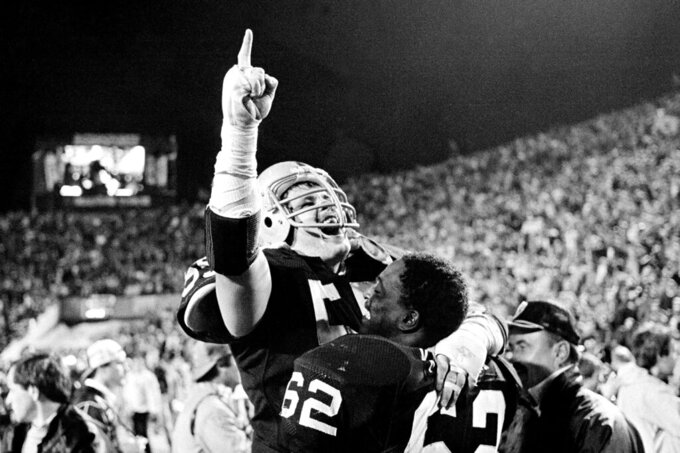 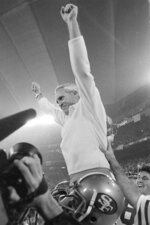 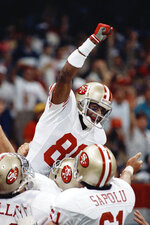 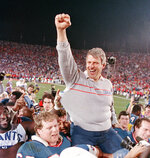 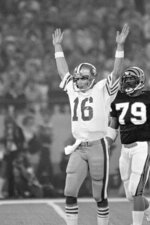 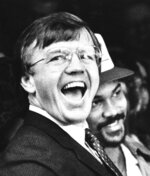 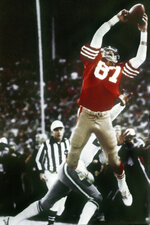 The NFL didn't see any mergers or expansion in the decade, but a few franchises were on the move.

The Oakland Raiders made their long-awaited trek down south on the Pacific Coast Highway to Los Angeles in 1982, giving the league two teams in the Hollywood area with the Rams settled in Anaheim.

On a cold night in March 1984, Baltimore Colts owner Robert Irsay relocated his team to Indianapolis without any public announcement — leaving fans in both cities stunned when they woke up that morning.

That same year, the New York Jets left Shea Stadium in Flushing, New York, and moved in with the Giants in East Rutherford, New Jersey.

After a 28-year stay in St. Louis, the Cardinals relocated to Arizona before the 1988 season.

The San Francisco 49ers ruled most of the decade by winning Super Bowls after the 1981, '84, '88 and '89 seasons. Led by coach Bill Walsh, quarterback Joe Montana and wide receiver Jerry Rice, the Niners in 1984 became the first team in NFL to win 15 games in the regular season and 18 overall, including the playoffs.

Mike Ditka's Chicago Bears matched that feat the following season, winning the Super Bowl with possibly the greatest defense the league has seen. Buddy Ryan's bunch allowed just 198 total points in the regular season and shut out four teams — including two in the playoffs.

The 1980 Raiders were the first wild-card team in NFL history to win it all. Three years later, they delivered Los Angeles its first Super Bowl champion.

Montana won three Super Bowl MVP awards during the decade and established himself as one of the greatest players at his position in NFL history.

Rice was on the receiving end of lots of those passes from Montana, on his way to setting numerous league records, including career receptions and yards receiving.

Walter Payton had his biggest years in the 1970s, but Sweetness still ran for more than 1,000 yards six times in the decade before retiring as the NFL's career rushing leader after the 1987 season.

Dan Marino burst onto the scene in 1983, lighting up scoreboards with his powerful arm. He led the Dolphins to the Super Bowl the next year while being named NFL MVP and jumpstarting a career that ended with him setting over 40 NFL single-season and career passing records.

John Elway was a tough gunslinging passer who was also dangerous with his feet. He helped the Broncos to five Super Bowl appearances over his career and retired as the league's leader in victories.

The goggles-wearing Eric Dickerson set the NFL rushing record with 2,105 yards in 1984 as one of the league's most dynamic running backs.

The 1980s included some of the most dominant, sack-happy defensive players in league history, including Lawrence Taylor, Howie Long and Reggie White.

Walsh was the architect of the West Coast offense and coached it to perfection while building the 49ers into one of the winningest franchises in NFL history.

Gibbs restored a winning culture to the Washington franchise, leading the Redskins to three Super Bowl appearances in the 1980s, including two victories. He'd win another in 1991.

Ditka was one of the toughest and most productive tight ends in NFL history, and carried that approach over as a head coach. His 1985 Bears featured a tenacious defense and were one of the most dominant all-around squads the league has seen.

Bill Parcells used a hard-nosed, disciplinarian approach to turn the Giants into one of the most successful franchises of the decade. The Big Tuna won the first of his two Super Bowl titles with the Giants to cap the 1986 season.

Dan Reeves never won the big game as a head coach but led Elway and the Denver Broncos to three trips to the Super Bowl during the decade.

The San Diego Chargers edged the Dolphins 41-38 in overtime at the Orange Bowl in an AFC divisional round game during the 1981 season that has been referred to as "The Epic in Miami." The teams set postseason records for the most points scored, most total yards and most total yards passing.

The NFC championship game that year featured one of the most famous and iconic plays in NFL history. With 58 seconds left and the 49ers trailing the Cowboys 27-21, Montana connected with Dwight Clark — who made a leaping grab in the back of the end zone for a go-ahead 6-yard touchdown that's referred to as "The Catch." The victory also began the 49ers' march to dominance in the decade.

A week after Cleveland edged the New York Jets 23-20 in two overtimes to advance to the AFC championship game in the 1986 season, Browns fans had their sights set on the Super Bowl. But, Elway marched the Broncos 98 yards over 15 plays in a span of 5 minutes and 2 seconds — known as "The Drive" — to tie it with 37 seconds left in regulation. Denver then won it 23-20 in overtime.

The Broncos and Browns met again a year later in the AFC title game, and there was more heartbreak for Cleveland fans. With 1:12 left and the Browns trying to tie, Earnest Byner lost the ball on the Broncos 1 — "The Fumble" — and Denver went on to win 38-33.

There were two play stoppages during the decade with player strikes. The first in 1982 lasted 57 days, shortening the season from 16 games to nine. Division standings were ignored for the playoffs, with teams seeded 1 through 8 based on records. The second strike came in 1987, with one week of games lost and Weeks 4-6 played with replacement players.

Sacks became an official statistic in 1982, putting even more value on dominant pass-rushing players such as Taylor, White, Long and Mark Gastineau.

The NFL broke several racial barriers in the 1980s. Washington's Doug Williams capped the 1987 season by becoming the first black quarterback to win a Super Bowl. The following year, Johnny Grier was the first black official promoted to referee. In 1989, Art Shell took over as interim coach of the Raiders after Mike Shanahan was fired, becoming the league's first black head coach before getting the full-time gig the next year.

Paul Tagliabue took over as the NFL Commissioner in 1989, replacing Pete Rozelle who retired after nearly 30 years in the role.

The largest player trade in the history of the league also happened that year, when Dallas sent running back Herschel Walker to Minnesota in a transaction that ended up including 18 players and draft picks. The Chargers were also involved, acquiring running back Darrin Nelson after he refused to report to the Cowboys. Dallas turned several of the picks they received into building blocks for three Super Bowl wins in the 1990s, including Emmitt Smith, Russell Maryland and Darren Woodson.

The NFL ruled in 1981 that players could no longer use Stickum or other adhesive substances on their hands, equipment or uniform to help them catch footballs. It became known as both the "Lester Hayes Rule" and the "Fred Biletnikoff Rule" after the Raiders cornerback and wide receiver, respectively, who were both known to apply the sticky stuff all over — even their arms, socks and helmets — during games.