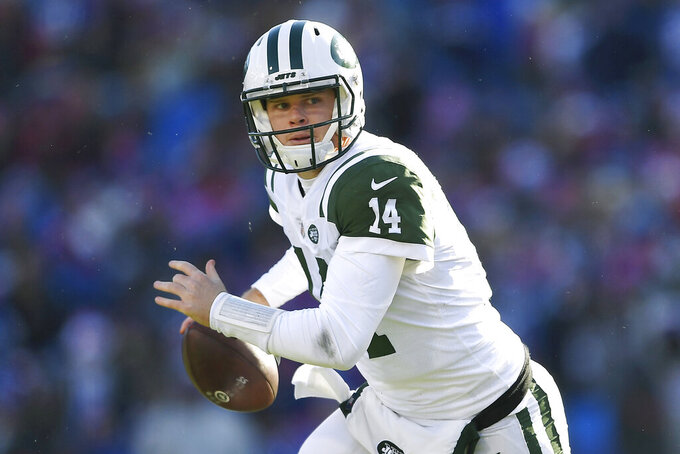 FILE - In this Dec. 9, 2018, file photo, New York Jets quarterback Sam Darnold rolls out during the first half of an NFL football game against the Buffalo Bills, in Orchard Park, N.Y. Given the many variables that go into developing an elite quarterback, Pro Football Hall of Famer Jim Kelly can't even imagine assessing what to make of last year's group of five first-round draft picks as they enter their sophomore seasons. (AP Photo/Adrian Kraus, File)

Given the many variables that go into developing an elite quarterback, Jim Kelly can't even imagine assessing what to make of last year's group of five first-round draft picks as they enter their sophomore seasons.

That doesn't mean the Pro Football Hall of Famer won't get questions regarding Cleveland's Baker Mayfield and Co.

"Good class, but yeah, it's definitely too early," Kelly said.

"Every time there's a good class that comes out and they start off good, everybody starts comparing them to the class of '83. But until they've done it ..." he added, pausing, before praising the accomplishments of the 2004 rookie QBs: Eli Manning, Philip Rivers and Ben Roethlisberger.

Kelly, a member of the NFL's most celebrated quarterback draft class, didn't begin getting an inkling of how good he and the Bills could be until around his third season in Buffalo. That was when the Bills began forming a balanced identity on offense with the additions of running back Thurman Thomas and receiver Andre Reed.

Mayfield, Darnold and Rosen are all adapting to new coaching staffs — never mind Rosen, who's dealing with the humbling reality of being discarded by the Cardinals after just one year.

Then there's Allen and Jackson, who are in the same offensive systems but face questions of whether they can develop into consistent passers after relying too much on their dynamic running abilities.

"Poise and accuracy. You should understand pocket presence more," he said. "The ability (to do these) leads to being a true leader."

And yet Rich Gannon, another former quarterback-turned-broadcaster, noted the expectation doesn't always hold true, especially for those forced to learn new systems.

"When we talk about and we see a lot of progress from Year 1 to 2 with a lot of quarterbacks, there's a footnote to that," he said. "It's not necessarily the case with young quarterbacks that undergo significant change in Year 2. In fact, in a lot of cases we see quarterbacks regress."

Gannon compared a quarterback's development to that of a 16-year-old learning to drive.

"All he is looking at is the road in front of him and the car in front of him. He's not seeing anything that's going on to the side or behind," he said. "By the second year, your vision expands. You see more and recognize more."

Though each is different, it won't prevent comparisons from being made, especially given three are in the AFC East and two in the AFC North — and because the schedule could have all five facing each other this season.

"I don't know what to make of that," Gannon said of the scheduling quirk.

"I never got into comparing things so much. I just think it's how good are you or your team? Are you a player that's ascending?" he added. "Those guys I would say have a lot to prove."

And that includes Mayfield, whom Gannon calls the most intriguing player of the class.

"I was really impressed with his poise, his presence, his command. He's been in big games before, so the attention is not too big for him, obviously," he said.

Kelly sidestepped a question about Mayfield, and shifted the conversation to another young quarterback entering his third season, but second as a starter.

"I think the guy I see as a heck of a quarterback, because I coached him at the Pro Bowl this past year, is Patrick Mahomes," Kelly said, referring to the Chiefs budding star and 2018 league MVP. "Right now, I'd have to put Patrick Mahomes above everybody in the NFL because he looks to me like a very special quarterback."

Analysis: A lack of confidence isn't an issue for the brash-talking player, who has quickly won over Browns fans by his production — he's credited with four game-winning drives already — and ability to chug a beer at a recent Indians game. With no love lost for former coach Hue Jackson, Mayfield welcomes Freddie Kitchens and the addition of receiver Odell Beckham Jr. to an offense that already features Jarvis Landry.

What he said: "I'm going to be me," Mayfield noted, in response to the buzz he generated for downing a beer while attending the Indians game against the Los Angeles Angels.

What others are saying: "There's a lot of hype around him right now, and he's got some swagger. I just want to see how much better he can be, and how much better that team can be," said Gannon.

Analysis: Darnold showed progress as one of the NFL's most productive and efficient quarterbacks over the final month after missing three games with a foot injury. Upgrades at running back, with the additions of Le'Veon Bell and Ty Montgomery, should keep opposing defenses in check and open up passing lanes.

What he said: "I don't know what it's like to be a 10-year vet. But I definitely think there's a lot more comfortability," Darnold said in reference to coach Adam Gase saying he must feel like a 10-year veteran. "I grew a lot after last year."

What others are saying: "The few times that I've been in his presence and talking with him, he gives you a good vibe, a good feeling," Jets Hall of Fame quarterback Joe Namath said. "He's respectfully humble. Physically, he can play as well as anybody. He just needs to keep polishing himself, and the team needs to polish up."

Analysis: Allen played to limited expectations in being raw, strong-armed and having accuracy issues, with his 52.8 completion percentage ranking 32nd in the NFL while overseeing a patchwork offense. He needs to show improvement and more patience in the pocket, given the attention the Bills placed in overhauling the offense by adding receivers Cole Beasley and John Brown, tight end Tyler Kroft, and retooling underperforming offensive line.

What he said: "I know there's still a lot I have to learn in this game, a lot that I have to do to improve, and I'm going to work my tail off until I get to where I need to be to help this football team win games."

What others are saying: "We want him to be aggressive, but we also want him, when the defense tells you, to chuck it down and get it to second-and-4," GM Brandon Beane. "This is his team. That's the biggest thing that I see from a year ago."

Analysis: Red flags regarding his work habits and leadership skills raised before the draft didn't lower following his first NFL season, after which he was sent packing to the Dolphins when Arizona selected Kyler Murray to begin the draft. Rosen opened camp behind veteran journeyman Ryan Fitzpatrick, with no clear indication of when he'll get an opportunity to start.

What others are saying: "He's probably the one that would concern me the most," Gannon said. "Just because you're a first-round pick, just because you have some arm talent, that doesn't mean (anything)."

Analysis: Jackson took over for an injured Joe Flacco just in time to spark the Ravens' late-season surge to the playoffs. Concern is, he did more with his running ability in leading NFL quarterbacks with 695 yards rushing than with his arm, topping 200 yards passing just once. He then produced a dud during the first three quarters of Baltimore's 23-17 loss to the Chargers in an AFC wild-card playoff before a late-game rally fell short.

What he said: "I know I said it a million times last year, just coming in a rookie, it is a lot different. ... But this year was like I already did it, so I just have to perform and come out and win."

What others are saying: "You can't live your life in fear," coach John Harbaugh said on whether Jackson is more at risk to being hurt by running too often. "I think there's just as much fear on the other side that he's going to take the thing to the house if he gets out and runs, too. So we'll live in that world as opposed to the other world."