NFL combine change has players skipping out on bench press 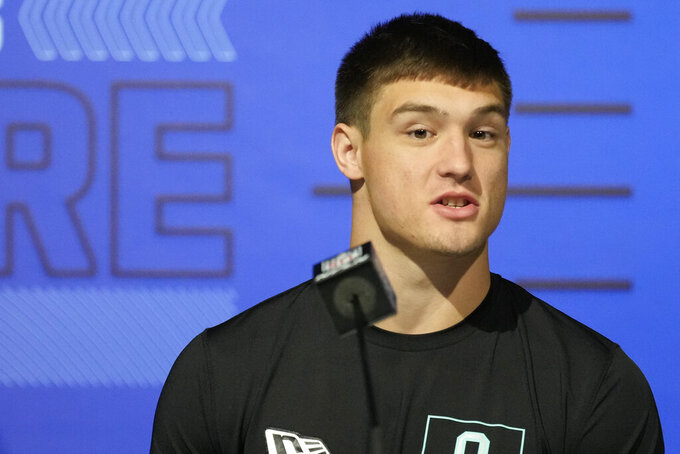 Plenty of players have long skipped the 40 at the NFL scouting combine, preferring to run it at their college pro days instead.

Now, it’s the bench press they’re forgoing because it was moved from the day prior to on-field drills at Lucas Oil Stadium to the same day, in part to accommodate the shift of workouts to prime time for television.

Only 18 of 59 offensive linemen opted to see how many times they could lift the weights Friday.

Other positions are seeing a similar rash of players skipping the one drill even injured players routinely agreed to. Some players said they felt it would leave their muscles too spent and sap their strength or mobility in other drills.

“I’m just going to do it at my pro day,” former Colorado linebacker Nate Landman said. “My bench would be at 10 a.m. and my 40′s at 8 p.m. You don’t want to rile up and go back down and then try to rile back up again, which a lot of guys are finding out.

“And it’s a lot of stress, this whole process. And so, when I can relieve that by pushing some stuff to pro day, then why not? Just to be at peak performance.”

Last week, organizers said they changed the schedule to shorten the time players spend in Indianapolis — in response to previous post-combine surveys. They also said they moved the bench press because some players and agents complained the soreness from the day after lifting negatively impacted their workout results.

Still, teams like to do comparison shopping at the combine where the conditions are controlled and surfaces are the same. Pro day statistics can be unreliable because of a wide variance in conditions and setup.

So, instead of the usual, “I’m not going to run the 40,” many players are saying, “I’m doing everything except the bench press” — at the urging of others.

“I was hoping to do 42 (reps) to get the linebackers record," said Leo Chenal, who played at Wisconsin and whose his trainers advised against lifting in Indy. “I don't know what I'll do at pro day, but I'll be happy with 40.”

Turns out, they weren’t so fast.

When the official times posted on the league’s website, the times — while still quick — were slower than initially reported.

Baylor receiver Tyquan Thompson, for instance, completed the sprint in 4.28 seconds instead of the 4.21 viewers saw. Ohio State receiver Chris Olave, who was initially shown at 4.26, finished at 4.39.

On Friday, the cheers came from all corners.

Defensive linemen Joshua Paschal of Kentucky and Thomas Booker of Stanford were relieved at the prospect of not missing games or making long road trips. But perhaps defensive lineman Travis Jones, of UConn, summed it up best.

Defensive end Kayvon Thibodeaux was criticized after recently explaining why he chose to play at Oregon rather than Alabama.

When asked Friday if he regretted the comments, Thibodeaux didn't back down.

“I don't really pay attention to social media, I feel like a lot of it is clickbait,” he said. “But when I talk about why I chose Oregon, I chose Oregon for the reasons I did and I wouldn't change anything. I feel like the people in my life are there for a reason and I've been set up for a legacy that only I can be thankful for.”