No. 1 pick to No. 1 in picks, Browns QB Mayfield struggling 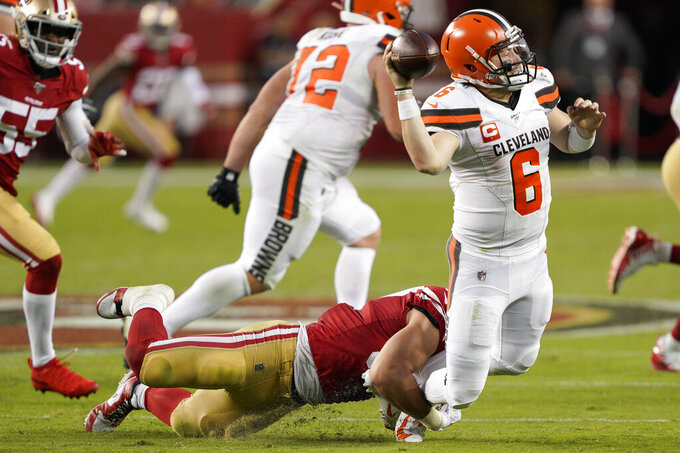 A record-setting rookie quarterback who pulled the Browns back from their darkest despair while re-energizing a fan base last season, Mayfield has been error-prone, inaccurate and inconsistent for a team that has underwhelmed and underachieved through six games.

More hazardous to himself.

Mayfield reached the Browns' bye week leading the NFL with 11 interceptions — the most by a Cleveland QB in six games since 1984 — and he's hurt after taking a helmet to the left hip while making a scramble during Cleveland's 32-28 loss on Sunday to the Seattle Seahawks.

He's expected to be ready to play the New England Patriots on Oct. 27, when the Browns (2-4) will resume a season that coach Freddie Kitchens feels has reached a crossroads.

Mayfield will determine which direction it goes.

There are a number of variables that explain the decline in Mayfield's game this season — dropped passes, a new offensive coordinator, line issues, injuries, inexperience, defenses designed to take away his strengths. But accuracy falls squarely on the quarterback and the 24-year-old ranks 33rd with a completion percentage of 56.6, down from 63.8% last season.

A deeper dive into Mayfield's statistics reveals other troubling trends. He's just 9 of 29 (31 with three touchdowns and three interceptions in the red zone. Last year, he completed 65% of his passes with 20 TDs and zero interceptions inside the opponents' 20-yard line.

Mayfield has been off target too often. He's had some bad luck with several passes tipped and picked, but Mayfield hasn't been nearly as precise as he was at Oklahoma or in the second half of last season, when he led the Browns to five wins over a six-week span and broke Peyton Manning's rookie record with 27 TD passes.

"He's an accurate guy," said quarterbacks coach Ryan Lindley. "Sometimes it's with his feet, he speeds himself up. At times he thinks maybe too quickly, his feet follow up and you're trying to catch up. It's a variety of different things. Whether it's his feet, whether it's his mind at times, we all need to iron it down and get on the same page."

The Browns believed Mayfield would take a major step forward in his second season. It hasn't happened yet.

Still, general manager John Dorsey, who gambled by taking Mayfield first overall in 2018, feels his young quarterback is making strides, albeit small ones.

"To master the quarterback position is very hard," Dorsey said. "You just can't go and show up and do it. He's in his second year and right now defensive coordinators are probably throwing different looks that he hasn't seen, but Baker is one of those guys that he's smart enough, he's not going to make the same mistake twice, so he's learning from that.

"I like where he is and I like his competitiveness. I love everything about him, that hasn't changed for me one bit in terms of his competitiveness, his ability to throw the football and move this thing. And what I really like is that his teammates like him."

There's no denying the Browns have Mayfield's back.

His leadership is apparent during games, practices and in the locker room. Mayfield sets the tone, his teammates follow.

Unable to take part in drills this week because of the hip injury, Mayfield served as an extra coach. When tight end Demetrius Harris dejectedly walked toward him after dropping a pass, Mayfield fired him another ball and then gave him an encouraging slap on the shoulder pads. When players couldn't hear inside the field house because the music was blaring too loudly, Mayfield ordered it lowered.

It's easy to point at Mayfield and blame him for Cleveland's poor start. That's life for any pro quarterback.

But it's too easy.

The Browns have committed a league-high 57 penalties, several of them drive-killing infractions. Their defense has been gashed for 445 yards rushing the past two weeks. In his first head coaching gig, Kitchens has struggled to find the right run-to-pass balance. The offensive line could undergo a major overhaul coming out of the bye.

"It's not just Baker," said safety Damarious Randall. "Everybody's got to step up a little bit. As bad as we played against Seattle, we had a chance to get a stop on defense and we could've ended the game. We could be sitting here 3-3 and a lot of questions that y'all got right now, we wouldn't even be talking about, so I wouldn't say it's on Baker to step up for us to change the way of our season."

Mayfield, though, has to play better for the Browns to make a playoff push over the final 10 games.

While others may be wondering if he's a franchise quarterback, Lindley's confidence in Mayfield hasn't been shaken.

"On a day-to-day basis, you still see the things he does on the field and the way he carries himself," he said. "The best part is he's still young and he's still growing. You see what that kid's going to become and what he is — and that's something special."