No surprise: Peyton Manning a Hall of Fame finalist 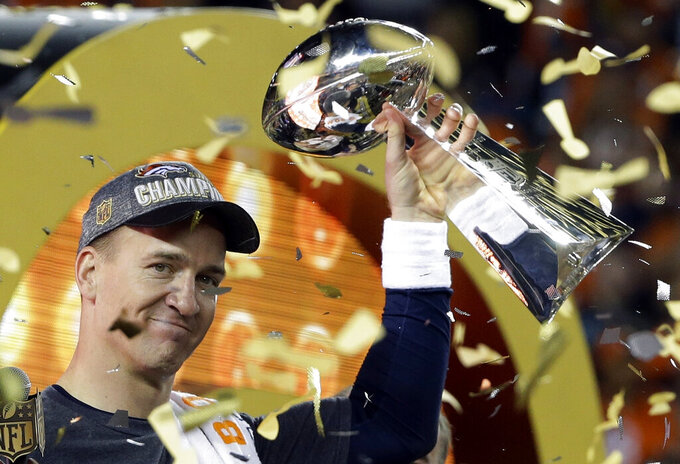 FILE - In this Feb. 7, 2016, file photo, Denver Broncos quarterback Peyton Manning holds up the Vince Lombardi Trophy after the Broncos defeated the Carolina Panthers 24-10 in NFL football's Super Bowl 50 in Santa Clara, Calif. Manning, in his first-year of eligibility, was selected as a finalist for the Pro Football Hall of Fame's class of 2021 on Tuesday, Jan. 5, 2021. (AP Photo/Julie Jacobson, File) 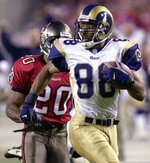 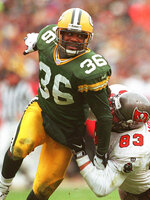 Peyton Manning, no surprise, is among 15 finalists for the Pro Football Hall of Fame's class of 2021.

The star quarterback, owner of a record five NFL Most Valuable Player awards and two Super Bowl titles, was the first finalist revealed by the hall on Tuesday night.

Manning, of course, was one of the most prolific passers in NFL history. In 18 pro seasons and 265 starts out of 266 games played since being the top overall draft choice by Indianapolis in 1998, he had 14 seasons with 4,000-plus yards passing.

Joining Manning as a finalist was one of the players he threw to, wide receiver Reggie Wayne, a finalist for the second time. First-year eligible Calvin Johnson and second-time finalist Torry Holt also made the cut among receivers.

Four defensive backs, including current 49ers general manager John Lynch, advanced. This will be Lynch’s eighth time as a finalist, while it’s the first for Charles Woodson in his initial year of eligibility, and Ronde Barber, and the second for appearance in the finals for Leroy Butler.

“I am just enjoying this moment, sitting here watching those highlights and what you immediately do is kind of reliving some of those moments,” Woodson said. “To me it is not lost to be in this moment, to be a Hall of Fame finalist in the first year; it takes a lot to get to this point. You really have to make an impact on the game and I am excited to be in this moment.”

Two of the NFL’s most dependable defensive linemen got to the finals: sack master Jared Allen and versatile Richard Seymour. Allen, who had 136 sacks and forced four safeties, is another first-year eligible player, while Seymour has made the finals for three of his four eligible years.

Zach Thomas, who also excelled on special teams, was one of three linebackers making the finals, joining Sam Mills — a star in the USFL and then the NFL — and Clay Matthews, who led some strong Cleveland defenses from 1978-1993 before playing three season in Atlanta. Thomas and Mills became second-time finalists, and Matthews for the first time.

Two offensive linemen who have been frequent finalists round out the potential class of 2021: Alan Faneca and Tony Boselli. Faneca, who played guard and tackle and starred for three franchises (Steelers, Jets, Cardinals) made his sixth final in as many years of eligibility, while Boselli, a standout for Jacksonville, reached the finals for a fifth time.

Voting on the entrants to the hall will be conducted later this month, with the inductees announced during Super Bowl week. A maximum of five modern-day players can be chosen, along with three previously announced candidates should they get the required votes: coach Tom Flores, contributor Bill Nunn, and senior Drew Pearson.

Inductions are scheduled for next August, when the 2020 class and a special centennial class also will be enshrined after the COVID-19 pandemic forced postponement of those ceremonies last summer.