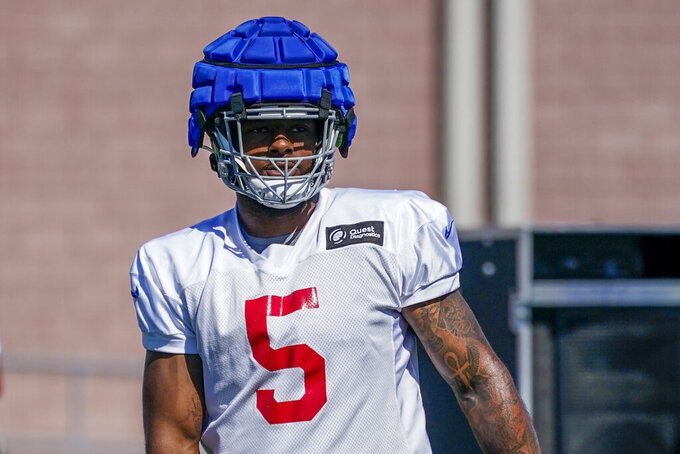 EAST RUTHERFORD, N.J. (AP) — Kayvon Thibodeaux and Evan Neal were acquaintances when the New York Giants drafted them with the fifth and seventh picks overall in the NFL Draft in late April.

It seems now they're linked in more ways than one: They are teammates and friends, two big men who've gone up against each other every day of training camp. And as the first week came to a close Saturday, the rookies also have been penciled in as starters and much is expected.

A linebacker and edge rusher from Oregon, Thibodeaux is going to line up on both sides in coordinator Wink Martindale's keep-them-guessing defense. Neal, who came out of Alabama and was the second of New York's first-round choices, has been at at right tackle since organized team activities in the spring.

“They have articulated that they’re counting on us, but I’m counting on myself to make the plays and live up to the goals I have for myself,” Thibodeaux said. “It’s been a great journey so far, and I know that they believe in us. And they’ve given us all the tools to continue to elevate. So, now it’s just up to us to make it happen.”

Neal and Thibodeaux occasionally had been matched up against each other in summer camps when they were in high school. Alabama and Oregon never met on the field in their college careers.

“It’s just so ironic that we ended up on the same NFL team,” Neal said. “I’m just excited to go against him every day, get each other better. I believe that iron sharpens iron.”

The Giants got the extra first round pick after making a trade with the Chicago Bears in the 2021 draft to drop down from from 12th pick overall to No. 20.

After five straight losing seasons, the Giants need Thibodeaux and Neal to perform well as rookies if things are going to start turning around under coach Brian Daboll. New York posted a 4-13 record in 2021.

Both have picked up the playbook quickly: Thibodeaux has shown ability to get to the passer and Neal has blocked well.

“He beats me some reps, I get him some reps. That’s what it’s all about, that’s the name of the game — getting better," Neal said.

However, the workouts have been in shorts and jerseys. Things change next week when the pads are put on.

Thibodeaux has gone from being a big, talkative personality in the early days after the draft to more businesslike since camp opened.

“You got to know how to compartmentalize,” Thibodeaux said. “There’s a time and place for everything. So, when we are on the field it’s all business, and now it’s training camp. We’re getting ready for a long journey.”

Neal said the two don't share notes off the field for fear of giving the other an advantage.

“We’ve just been putting our head down and we’ve been working,” Neal said.

The Giants will take that kind of attitude.

NOTES: Safety Dane Belton intercepted a Daniel Jones pass in the end zone. ... Cornerback Darnay Holmes forced a fumble by Saquon Barkley and defensive back Julian Love had a long return. ... Backup quarterback Tyrod Taylor showed his athleticism dunking the football over the crossbar after running for a touchdown.