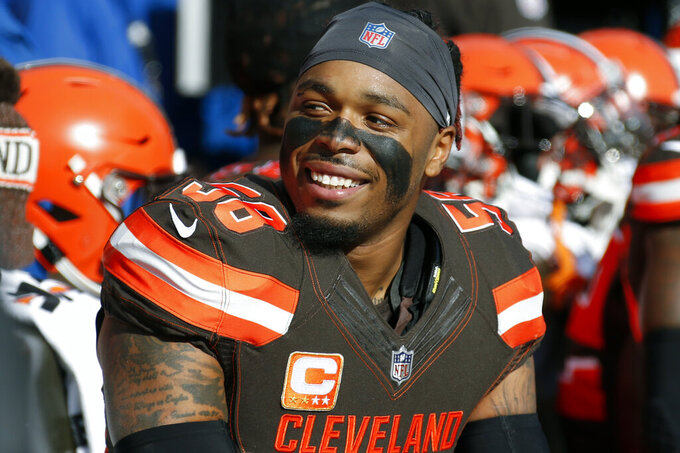 FILE - In this Nov. 4, 2018, file photo, then-Cleveland Browns linebacker Christian Kirksey (58) sits on the bench before an NFL football game against the Kansas City Chiefs, Sunday, Nov. 4, 2018, in Cleveland. Linebacker Christian Kirksey has agreed to terms on a deal with the Green Bay Packers less than a week after the Cleveland Browns released him. Kirksey’s agent, Brian Mackler, confirmed that Kirksey would be signing with the Packers but didn’t disclose terms. (AP Photo/Ron Schwane, File)

Green Bay’s Christian Kirksey believes his history with his new defensive coordinator will help the veteran linebacker make a smooth transition as he switches teams for the first time.

Kirksey signed with the Packers in March after he was released by Cleveland, where he spent his first six NFL seasons. Packers defensive coordinator Mike Pettine was the Browns’ head coach in 2014-15.

“Honestly, as soon as I opened the playbook, man, I was so familiar with it and his defense,” Kirksey said Wednesday in a Zoom session with reporters.

The unusual nature of the pandemic-imposed virtual offseason could hinder players who changed teams and haven’t gotten accustomed to their new surroundings. Kirksey is counting on his comfort level with Pettine to help as the 27-year-old enters a critical stage of his career.

Kirksey was one of the NFL's most prolific tacklers from 2016-17, but he’s had trouble staying on the field lately.

He played only seven games due to a hamstring injury in 2018. Kirksey appeared in just two games last year before a torn pectoral muscle knocked him out for the rest of the season.

Kirksey says he’s healthy now and ready to reassert himself. The Packers signed him to a two-year, $13 million contract that included a $4 million signing bonus.

“For those who may have slept on me or said, ‘Oh, he’s injury prone’ or ‘He’s not the same player he used to be,’ I’m here to prove them wrong and prove to myself that I’ve still got what it takes to be one of the best linebackers in the league,” Kirksey said.

“Just going through the medical part of it and talking to our people, they didn’t think it was anything that was long term,” Pettine said during a Zoom session last month. “I mean, he’s never been a guy that’s been injury prone, so obviously that’s a concern when you see the amount of time that he’s missed, but overall I just think it was a great signing for us for a lot of reasons. We’re not just bringing a really good player into the room. I mean, this is a guy who has great leadership ability.’’

The Packers need results from Kirksey because they didn’t make many other changes to a defense that allowed 285 yards rushing in an NFC championship game loss to the San Francisco 49ers. Kirksey essentially takes over for Blake Martinez, who led Green Bay in tackles each of the last three seasons before leaving for the New York Giants.

Kirksey is savoring the opportunity to play for a team with legitimate Super Bowl aspirations.

“I’ve never even had a winning season in my (NFL) career,” Kirksey said. “Just to get on Zoom and be a part of a team meeting when you see your head coach say we went undefeated in our division and we’re going to be the hunted and things like that, I got excited. I was revved up because I’ve never been a part of that.’’