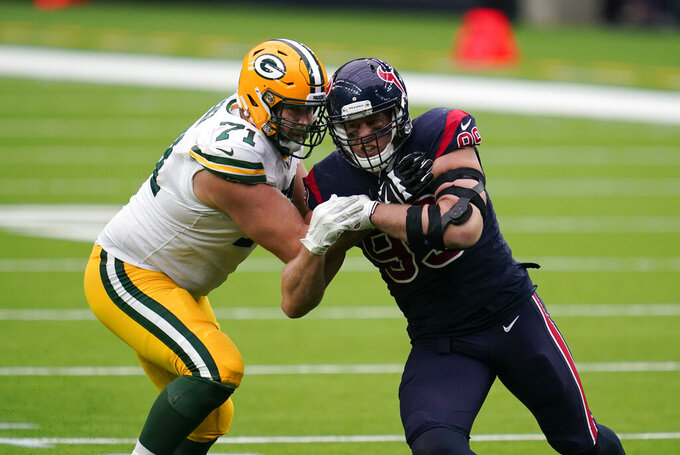 Releasing both players opens about $10 million in cap space.

Kirksey, 28, started all 11 regular-season games he played this season for the Packers, and he started one of their two playoff contests. He missed five games with a chest injury in 2020 after injuries limited him to seven games in 2018 and only two in 2019.

His 78 tackles for the Packers tied for second place on the team.

Kirksey had signed with Green Bay in March after he was released by the Cleveland Browns, who selected him out of Iowa in the third round of the 2014 draft.

Wagner, 31, played all 16 regular-season games for the Packers and made nine starts at right tackle. He also started each of Green Bay’s two playoff games.

He helped Green Bay allow no more than one sack in 13 of its 16 regular-season games. Wagner also was part of a line that didn't allow any sacks in an NFC divisional playoff victory over the Los Angeles Rams. But he struggled in the NFC championship game in which the Packers gave up five sacks and fell 31-26 to the eventual Super Bowl champion Tampa Bay Buccaneers.

Wagner also signed with the Packers in March after his release by the Detroit Lions. The 2013 fifth-round draft pick from Wisconsin has made 96 career regular-season starts with Baltimore (2013-16), Detroit (2017-19) and Green Bay (2020).