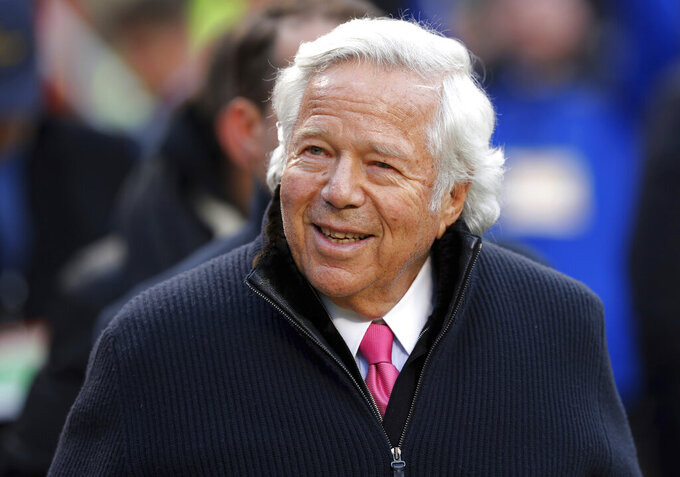 FILE - In this Jan. 20, 2019, file photo, New England Patriots owner Robert Kraft walks on the field before the AFC Championship NFL football game in Kansas City, Mo. Florida prosecutors have offered a plea deal to Kraft and other men charged with paying for illicit sex at a massage parlor. The Palm Beach State Attorney confirmed Tuesday, March 19, 2019, it has offered Kraft and 24 other men charged with soliciting prostitution the standard diversion program offered to first-time offenders. (AP Photo/Charlie Neibergall, File)

They also say the prosecutors' conditions for the men entering a diversion program in exchange for dropping misdemeanor charges of soliciting prostitution are too harsh.

Attorneys for Kraft and 14 of the other 24 men charged said in court documents filed this week that releasing the video taken secretly by police inside the Orchids of Asia Day spa during January would violate the state's public records law.

They said the videos should not be released because they are part of an ongoing investigation and have not been released to the defendants as part of the discovery process, where both sides exchange evidence for examination before trial. Under Florida law, most evidence collected in criminal cases is made public during discovery with some exceptions, such as confessions.

Kraft's attorneys and the Patriots have declined comment. The Palm Beach County State Attorney's Office declined comment on the video. The Associated Press is part of a media coalition trying to get evidence in the case released.

Barbara Petersen, president of the First Amendment Foundation, a Florida public records advocacy group, said the defense attorneys are misreading the law. She said prosecutors and police have the discretion to release evidence during an active investigation, if they choose.

Kraft is one of about 300 men charged in multiple counties between Palm Beach and Orlando as part of a crackdown on illicit massage parlors and human trafficking. Ten parlors have been closed and employees have also been charged. Many of the women are originally from China, were forced to live in the spas and were not allowed to leave without an escort, according to investigators.

According to police records, Kraft was chauffeured on the evening of Jan. 19 in a white 2014 Bentley to the massage parlor, where officers secretly recorded him engaging in a sex act and then handing over an undetermined amount of cash.

Investigators said Kraft returned 17 hours later, this time arriving at the upper-middle class shopping center where the spa was located in a chauffeured 2015 blue Bentley. Kraft, who is worth $6 billion, was again videotaped engaging in sex acts before paying with a $100 bill and another bill, police said.

Prosecutors have offered to drop the charges if Kraft and the men enter a diversion program for first-time offenders. That would include an admission they would be found guilty if their case went to trial, a $5,000 fine, 100 hours of community service and attendance in a class on the dangers of prostitution and its connection to human trafficking. They would also have to make a court appearance and be tested for sexually transmitted diseases. Prosecutors say the fine and community service are required by law and are not negotiable.

But attorneys representing other defendants told the AP their clients will not accept the offer because it is much tougher than what is offered in other Palm Beach County solicitation cases. They say previous clients who accepted diversion were rarely required to concede guilt or appear in court, and were able to negotiate the size of fines and hours of community service. They have pointed to cases where men paid $300 or less in fines and court costs, and agreed to just 25 hours of community service.

Scott Skier, who is representing an Orchids of Asia client, said Palm Beach prosecutors may be treating Kraft and the other 24 defendants equally, but not compared to those accused of solicitation in cases that didn't make national news.

"These cases are being handled atypical of my experience over the last 16 years," Skier said.