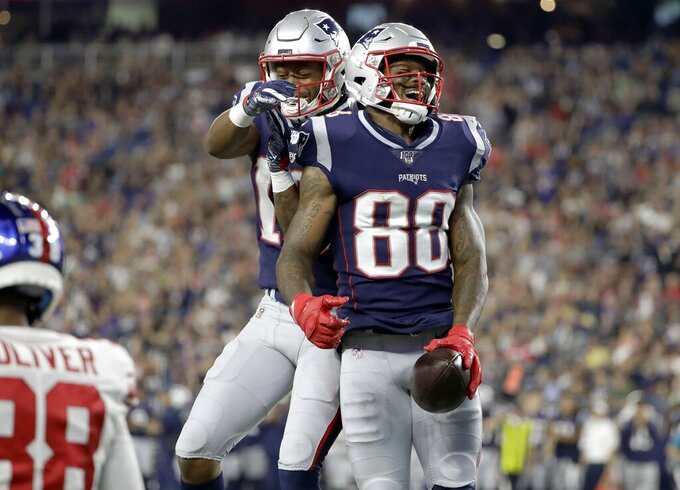 New York Giants' quarterback Kyle Lauletta may have found himself on the team.

Rookie Jarrett Stidham bolstered his bid to be Tom Brady's backup by throwing two touchdown passes for New England before the Giants scored on the final play with Lauletta throwing a 14-yard TD for a 31-29 victory over the Patriots on Thursday night.

Stidham, a fourth-round pick from Auburn, threw both of his TDs to Thomas - for 35 and 3 yards. He played the entire night and saw most of the preseason game action in a competition with Brian Hoyer if New England (3-1) decides to keep only two QBs. He went 18 of 28 for 225 yards against the Giants and also rushed for 50 yards.

"I think whatever the decision is made, whatever my role is on the team, that's what I'm going to do," Stidham said.

Coming off a torn left Achilles tendon late last season, Thomas signed with the Patriots as a free agent after he was cut by Houston.

"It's been a long time since I've been in the end zone," he said, breaking into a smile.

Thomas made seven catches for 87 yards.

Receiver Josh Gordon played for New England, along with Super Bowl MVP Julian Edelman — before Edelman left on the first drive following an injury scare to the same hand that caused him to miss the first three preseason games.

Sidelined with a broken left thumb until Thursday, Edelman caught a 20-yard pass on the first series and got up looking at the same hand. He was met on the sideline by a trainer and stayed there chatting with Brady. He remained on the sideline the rest of the game.

Lauletta, picked in the fourth round a year ago, drove the Giants down to the Patriots 14 before throwing the TD pass — his second of the game — to Alonzo Russell. He finished 22 of 40 for 248 yards.

"It was good just the way the game played out," he said. "We were down and we had to throw the ball to come back, and guys were just making plays. It was fun."

"I would have left him there, but we moved so well," Shurmur said. "I thought it was important for him to go through the week, after having let the media know he was going to be the starter."

The oft-suspended Gordon had two catches for 30 yards in six targets in his first game action after being reinstated by the league on Aug. 16. While with Cleveland, he was suspended the first two games of 2013 for violating the league's substance abuse policy and again in 2015, missing two full seasons.

Acquired from the Browns last September, he had 40 receptions for 720 yards and three TDs before he stepped away on Dec. 20 to concentrate on his mental health. He was later suspended indefinitely by the league.

Patriots' C David Andrews was on the sideline in sweatpants, wearing a baseball cap during warmups. He chatted briefly with Brady and had a quick embrace with owner Robert Kraft when the team walked off after warmups.

On Monday, the fifth-year veteran was reportedly released from the hospital after being treated for blood clots in his lungs last weekend.

The team hasn't released any information about his condition. James Ferentz started at center.

Giants RB Paul Perkins, who missed all of 2018 with a torn pectoral muscle, carried 11 times for 54 yards and caught two passes for minus-1.

WR Golden Tate III caught two passes for 37 yards on two targets. He'll miss the first four games because of a suspension for PED use.

New England's Stephen Gostkowski went 3 for 3 on field goal attempts, connecting twice from 40 yards or longer. He was just 2 of 5 before Thursday and 0 for 2 from 40 and beyond.

Patriots: OL Hjalte Froholdt went down with a left arm injury in the first quarter and DB Malik Gant was carted off in the fourth.

Patriots: The defending champs will unveil their sixth championship banner since 2001 before their prime-time opener against Pittsburgh at home Sept. 8.