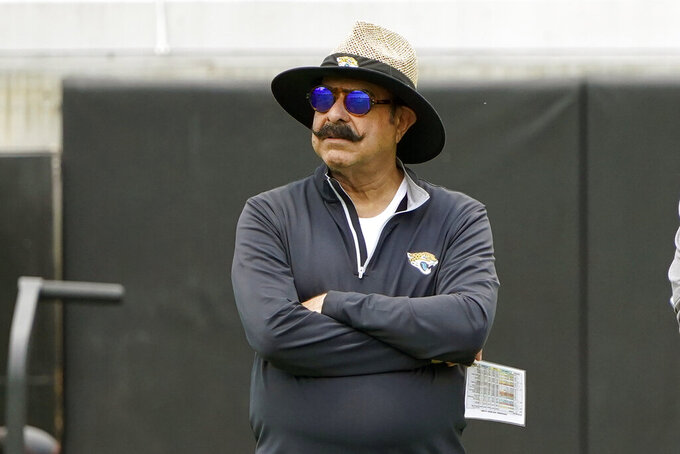 LAST YEAR: The Jaguars endured one of the most tumultuous coaching tenures in NFL history, with owner Shad Khan ultimately firing three-time national championship-winning coach Urban Meyer after 13 games and countless missteps — including one that resulted in a lawsuit. Meyer screamed at assistants, failed to connect with players and looked clueless when he didn’t know NFL rules or league stars. His downfall was months in the making when veteran kicker Josh Lambo accused Meyer in December of kicking him before a preseason practice and belittling him in front of teammates. Khan fired Meyer with cause, refusing to pay his once-coveted coach millions in guaranteed salary. Lambo has since filed suit against the Jaguars for allowing Meyer to create a hostile work environment. Jacksonville went 3-14, locking up the No. 1 pick for the second straight draft and finishing last in the AFC South for the fourth consecutive year.

CAMP NEEDS: Continuing to develop chemistry and cohesion on both sides of the ball tops the list for Pederson, who led Philadelphia to a Super Bowl victory to cap the 2017 season. Pederson took a softer approach to the offseason with Jacksonville, hoping to help players “heal” after the brief but trying Meyer era and rebuilding a winning culture that could help the team escape the AFC South cellar. He canceled a three-day mandatory minicamp and eliminated one practice to take his team golfing. He felt as if they had made enough progress installing schemes and plays (with nearly 100% participation) to cut it short. The next phase includes a major wrinkle: with the Jaguars building a new practice facility, they will bus to a nearby high school for camp. Staying healthy will be key, and getting healthy will be the goal for RB James Robinson, DT Malcom Brown, S Rayshawn Jenkins and Williams. Each of them sat out parts or all of the offseason program while recovering from injuries.

KEY CAMP COMPETITIONS: Jawaan Taylor, the 35th overall pick in the 2019 draft, enters the final year of his contract in a battle with second-year pro Walker Little at right tackle. Little was a second-round selection in 2021. Whoever ends up on the losing end will become the team’s swing tackle. Ryan Santoso and undrafted free agent Andrew Mevis will vie for the kicking job. Either could be an upgrade from Matthew Wright, who lacked the leg strength to consistently get kickoffs in the end zone. Still, Wright connected on 13 of 15 extra points and 21 of 24 field goals — including two from beyond 50 yards in the final minutes to beat Miami in London and end a 20-game skid. Running back could pose an interesting competition, with rookie Conner sharing repetitions with two guys coming off injuries: Robinson (Achilles tendon) and 2021 first-rounder Travis Etienne (Lisfranc).

EXPECTATIONS: The Jaguars have lost 29 of their past 33 games, their worst stretch in franchise history. But thanks to several high draft picks and some decent free-agent signings over the past two years, they seemingly have enough talent to escape the AFC South cellar. And assuming second-year QB Trevor Lawrence develops under offensively savvy Pederson, they could be a dark-horse contender in a watered-down division that lacks star power, especially at the all-important QB position.