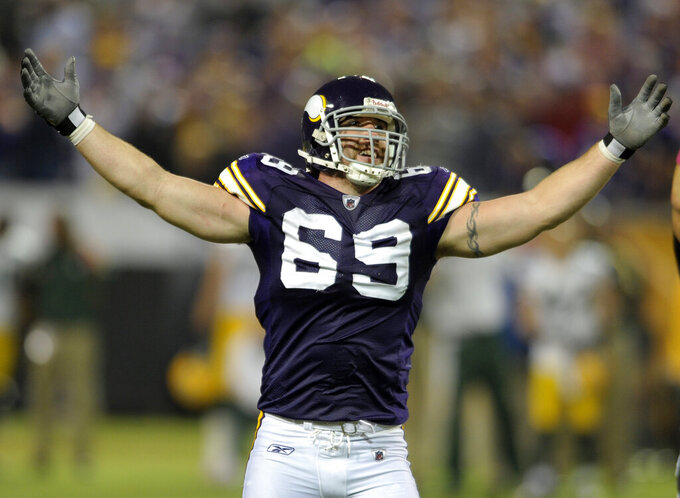 FILE - Minnesota Vikings' Jared Allen reacts after sacking Green Bay Packers' Aaron Rodgers during the second half of an NFL football game in Minneapolis, in this Monday, Oct. 5, 2009, file photo. The Vikings won 30-23. Allen is a 2021 finalist for entry into the Pro Football Hall of Fame. (AP Photo/Tom Olmscheid, File) 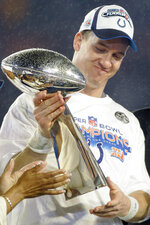 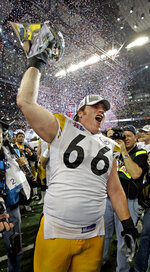 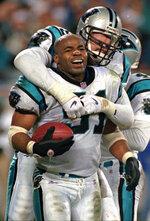 More than two decades ago, Charles Woodson beat out Peyton Manning for a prestigious college award. Something called the Heisman Trophy.

On Saturday, they likely will share an even more impressive football honor: entry into the Pro Football Hall of Fame.

Manning and Woodson, two of the most dominant players at their positions in the NFL from 1998 until their retirements in early 2016, are among four first-year-eligible finalists. During the NFL Honors television show when The Associated Press announces its 2020 individual awards, they are among the leading contenders for induction.

Both made the NFL's All-Decade Team for the 2000s, and carried their prolific production into the next decade. The only five-time league MVP, Manning quarterbacked Indianapolis to two Super Bowls, winning one, and then took Denver to two more, winning one.

“Peyton was someone I always admired as a quarterback, as a leader of the team," said Tom Brady, who someday will have his own bust in the Hall of Fame. "Peyton and I are right around the same age. I always looked up to Peyton, he always was doing things the right way. An amazing player, he took so much on. Like any great quarterback, there is a lot of responsibility you take on, make sure everything is a reflection of how you see the game. When everybody is seeing it through the same eyes, it is a great way to play a football game.

“The coaches ... they had so much trust in Peyton to get things right and he always did.”

Woodson, a cornerback for his first 14 pro seasons, then reinvented himself as a safety. He lost a Super Bowl with the Raiders, won one with the Packers, and was the 1998 Defensive Rookie of the Year, then the 2009 Defensive Player of the Year.

“That would mean job well done," Woodson told SiriusXM NFL Radio about possibly making the hall. "If you’ve ever done something and only needed to hear well done. Going out and playing the game I loved for so many years and giving it everything I had, you have to go through a lot. But each time I went out and gave it everything I had no matter what the outcome. If I hear that, it will mean job well done and that is all I need.

“I just wanted to be a great football player. I wanted to win championships, and I was able to accomplish a lot and had a lot of fun along the way. The game of football is like life and how do you bounce back and I feel like I bounced back every time.”

The other first-year eligibles under consideration for the August enshrinements are former Lions receiver Calvin Johnson, and sack master Jared Allen, who played for four teams.

In recent years, first-timers have gotten strong consideration for the Canton, Ohio, shrine. Only five modern-day players can be inducted per class, and in 2013, 2018 and 2019, three of them were new to eligibility. Some were slam dunks in those years: Jonathan Ogden in 2013, Ray Lewis and Randy Moss in 2018, Tony Gonzalez and Ed Reed in 2019.

Since 2005, there have been at least two first-year eligibles elected 11 times.

Johnson, with the memorable nickname of “Megatron,” and an even more memorable mix of power, speed and grace, also made the 2010 All-Decade Team. Allen finished his career with 136 career sacks and led the league in 2011 with 22, just a half-sack short of Michael Strahan's NFL mark.

The 2021 candidates make for a loaded field, though. So while five modern-day players certainly should make it, their identities are uncertain — perhaps beyond Manning and Woodson.

Consider the other finalists:

— Three more defensive backs, including current 49ers general manager John Lynch. This is Lynch’s eighth time as a finalist. It’s the first for Ronde Barber and the second for appearance in the finals for Leroy Butler.

— Along with Johnson are wideouts Torry Holt and Reggie Wayne, who was one of Manning's top targets for the Colts.

— Another dependable defensive linemen, Richard Seymour, in the finals for the third time.

— Zach Thomas, who also excelled on special teams, is one of three linebackers making the finals, joining the late Sam Mills — a star in the USFL and then the NFL — and Clay Matthews, who led some strong Cleveland defenses from 1978-1993 before playing three season in Atlanta.

— Two offensive linemen who have been frequent finalists round out the potential class of 2021: Alan Faneca and Tony Boselli. Faneca, who played guard and tackle and starred for three franchises (Steelers, Jets, Cardinals) has made his sixth final in as many years of eligibility while tackle Boselli, a standout for Jacksonville, reached the finals for a fifth time.

Inductions are scheduled for August when the 2020 class and a special centennial class also will be enshrined after the pandemic forced postponement of those ceremonies last summer.