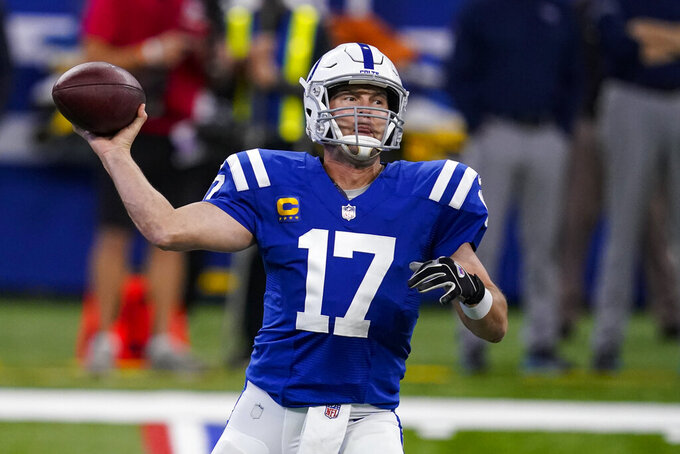 Indianapolis Colts quarterback Philip Rivers (17) throws against the Tennessee Titans in the first half of an NFL football game in Indianapolis, Sunday, Nov. 29, 2020. (AP Photo/Darron Cummings)

Philip Rivers’ first career start came against the Raiders when he was an up-and-coming 24-year-old prospect in San Diego.

He’s faced eight Raiders head coaches, 171 defensive players and played them in three stadiums over the past 14 seasons for the Chargers.

Now as Rivers is set to take on the Raiders for a record 29th time, he’ll do it for a new team in a new city when his Indianapolis Colts (8-4) visit Las Vegas (7-5) on Sunday for the first time.

“Having gone against this defense and being in the division a few times, you certainly know they know me and I know them,” Rivers said. “Whatever tweaks and things that they may do —it’s more kind of in that chess match from me to them and them to me, also and collectively to our offense. I think there is little combination of that, but I don’t see that there is necessarily a real advantage either way other than it’s allowing you to go, ‘Man, 29 times against the same franchise is pretty cool.'”

Rivers will pass Hall of Famer John Elway for the most career quarterback starts in the regular season against the Raiders. He already has more wins (18), TD passes (47) and passing yards (7,103) than any other quarterback who has faced the Raiders.

But this meeting has much bigger meaning than Rivers’ statistical accomplishments against the Raiders. Both teams are in the middle of a tough AFC playoff race with Rivers’ Colts one game ahead of the Raiders in the wild-card race.

The Raiders know Rivers would love to deal a blow to their playoff hopes after all those battles over the years.

“He has more fun playing football than most guys that I know,” coach Jon Gruden said. “He has a passion about him that’s rare and I know he wants to beat us in the worst way. He has a disdain for the Raiders. He’s made that perfectly honest to me in the last three years I’ve been back on the sidelines, so it’s great to see him playing well and we look forward to competing with him also.”

A year ago, the Colts started the same five offensive linemen in all 16 games. They haven’t been nearly as fortunate this year. Left tackle Anthony Castonzo’s absence at Cleveland ended his consecutive games streak at 20. And this week could be the fourth straight week with a lineup change. Right tackle Braden Smith (hand) missed the Green Bay, center Ryan Kelly (neck) sat out the second Tennessee game and Castonzo (knee) was out against Houston.

This week could be even more challenging, especially if Castonzo can’t play. His backup, Le’Raven Clark, went on IR this week with a torn Achilles tendon. If Castonzo sits out again, former Raider Chaz Green could get the start.

The Colts know they need to be aware of where Raiders tight end Darren Waller is at all times. Waller had 13 catches for 200 yards and two TDs in a win last week against the Jets, becoming the fourth tight end ever to have at least 200 yards receiving and two TD catches in the same game. Waller ranks second among all tight ends this season with 77 catches for 742 yards and also has improved as a blocker.

“The dude is unbelievable,” quarterback Derek Carr said. “He gets the credit because the fantasy stat people love him, but especially on stuff like that, he doesn’t get nearly enough credit for what he can do in the run and pass game protection-wise. He’s the complete package. I think he’s the best in the league.”

Defensive end Justin Houston says he hasn’t been happy with his play this season. But Colts coach Frank Reich has no complaints about what he’s seen from the NFL’s 2014 sacks champion. Last week, the 31-year-old Houston had three sacks, including an NFL record-tying fourth career safety. That gives him a team-best 7 1/2 sacks and he's within striking distance of finishing among the league’s top 10 yet again.

“I’m disappointed in myself,” Houston said. “I haven’t shown what I have left in the tank all season long. I’ve been inconsistent. I think this is probably the worst year I have had in a long time consistency-wise.”

The Raiders rode their running game to a three-game winning streak to start November, averaging more than 190 yards rushing per game against Cleveland, the Chargers and Denver. But the running game has struggled in recent weeks, averaging 67 yards per game the past three games. Starter Josh Jacobs missed last week’s game with an ankle injury and his status is in doubt again this week. No matter who plays, Gruden knows the production must be better.

“I haven’t been happy with it the last couple games. I know our guys haven’t either,” he said. “We can be optimistic and we can be realistic, and I’m going to be realistic, we got to do a better job. We got to have better plans, we got to coach better. We got to do it better, and I’ll just leave it like that. It’s never good enough.”