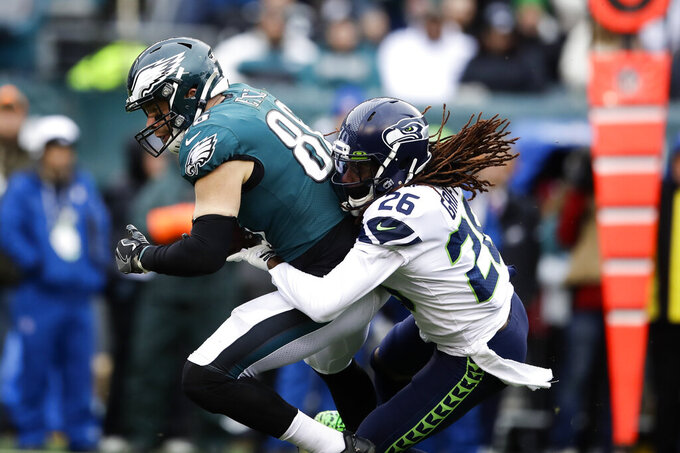 SEATTLE (AP) — Just like a year ago, there’s no avoiding the importance of this Monday night matchup in the Pacific Northwest between Minnesota and Seattle.

Except this time around, a division title is still very much in play for both teams.

“This is a huge game for both of us. We know the stakes. Everybody knows the stakes,” Vikings linebacker Eric Kendricks said. “Monday night makes it a little bit bigger, in Seattle. But I mean, you’ve got to live for these kind of moments, you know what I mean?”

For the second straight year, the Seahawks will host the Vikings in a late-season, prime-time matchup filled with playoff implications. But unlike that last meeting — won by Seattle 21-7 — when a wild-card berth was the target, both the Vikings and Seahawks are in the middle of division title races this time.

Seattle (9-2) is one game behind San Francisco in the NFC West and trying to avoid any stumbles prior to a Week 17 meeting with the 49ers at home. The Vikings (8-3) are even with Green Bay in the NFC North, but the Packers already have a win over Minnesota with a Week 16 matchup still to come.

Both teams would need to suffer a significant slide in the final month to put their playoff hopes in jeopardy. The Vikings have a two-game lead on the Los Angeles Rams in the wild-card race. Seattle is a game better.

But the shot at a division title raises the stakes significantly.

“We got a terrific schedule coming up, challenges and all that,” Seattle coach Pete Carroll said. “We’re going to have to play really well. I do think, though, that it leads us to our best football still ahead of us.”

While the playoff implications are the primary focus, the quarterbacks will certainly get their share of attention. It’s deserved as both Seattle’s Russell Wilson and Minnesota’s Kirk Cousins have been among the best in the league this season. Cousins leads the league in passer rating; Wilson is second. Wilson has 24 TD passes; Cousins 21. Both have thrown just three interceptions. Both are completing better than 67% of their passes.

TIME FOR A REFRESHER

After missing four starters in their previous game against Denver on Nov. 17 — wide receiver Adam Thielen, right guard Josh Kline, nose tackle Linval Joseph, free safety Anthony Harris — the Vikings had the advantage of the latest possible bye week to heal for the most challenging game of the final stretch. This was the second-latest bye week in team history, with only the break in 1991 falling later on the calendar. The Vikings are 2-7 in the last nine seasons in their games immediately after the bye.

“Give your body a rest, give your mind a rest. I think it came at a good time,” linebacker Anthony Barr said. “Hopefully we get some guys back healthy and be strong for this last five-game push we have.”

For most of the season, Chris Carson has carried the load for Seattle’s run game, while Rashaad Penny took on a complementary role, only getting a handful of carries.

That changed last week against the Eagles. Penny was the star, rushing for a career-high 129 yards and a clinching 58-yard touchdown in the fourth quarter. Carson was relegated to a lesser role, getting only eight carries to Penny’s 14. Carson also added to his league-leading fumble total with one that was credited to him and another that was his fault. Carson’s seven fumbles are the most among running backs in the NFL.

Carroll said Penny has earned more carries, but Carson will still get his share.

“Rashaad did great. I’m really fired up for that,” Carroll said. “We need his explosiveness. He continues to show up. He has had the real home run type of style of play. We’ve got to give him chances to bring that to us.”

For the fourth straight season, Eric Kendricks will take on the team of his older brother and fellow linebacker, Mychal Kendricks. Eric has lost each time, with the Vikings falling at Philadelphia in 2016 and in the NFC championship game after the 2017 season, and then at Seattle in 2018.

“We’re not going to face each other, really, but it’s pretty special,” Eric said of his sibling who’s two years older. They were both second-round draft picks, Mychal out of California in 2012 by the Eagles and Eric out of UCLA in 2015 by the Vikings.

These days, Eric is definitely not in Mychal’s shadow. He leads all linebackers in the NFL with 12 passes defensed, already matching Ben Leber (2008) and Matt Blair (1981) for the most by a linebacker in Vikings history. According to SportRadar research, no linebacker in the league has had more than 13 passes defensed in any of the last six seasons.

Seattle is getting back into the mode of taking away the ball. The Seahawks have forced 16 turnovers in the past six games, including eight in the past two against San Francisco and Philadelphia. The Seahawks are third in the league in total takeaways with 24, behind New England (29) and Pittsburgh (24). Minnesota has just 12 giveaways on the season, tied for seventh best in the league.