Plenty of familiar faces playing in new places around NFL 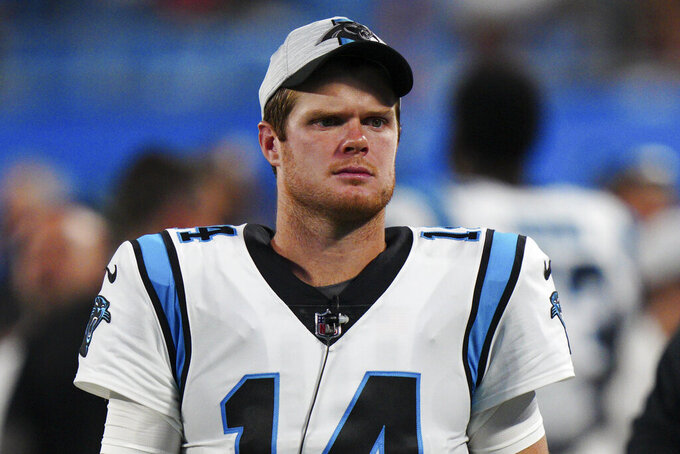 With the NFL season about to kick off, it's time for a quick refresher on some familiar faces in new places. Otherwise, you might be scratching your head while drafting your fantasy football team or doing double takes when you flip on the games in Week 1.

So, if you missed some free agent signings or trades in the offseason — or forgot — and spent your summer days and nights sipping cocktails by the pool rather than watching preseason games, we're here to help.

Goff, two first-round picks and a third-rounder were dealt by Los Angeles to Detroit for Stafford in an offseason blockbuster. Both will start for their new teams. ... Wentz was traded to Indianapolis, where he was reunited with current Colts coach and former Eagles offensive coordinator Frank Reich, for a third-rounder and a 2022 conditional second-rounder. Wentz had surgery to repair a broken bone in his foot earlier this month, but could be ready for the opener. ... The Jets moved on from Darnold and dealt him to Carolina for a sixth-rounder this year and second- and fourth-rounders in 2022. New York drafted Zach Wilson with the No. 2 overall pick. ... After getting Darnold, the Panthers traded Bridgewater to Denver for a sixth-rounder and he has taken the Broncos' starting job. ... FitzMagic is still going strong and the 38-year-old well-traveled vet will be under center for Washington in Week 1 — the ninth NFL team for which he'll start. ... Dalton, in Dallas last year after nine in Cincinnati seasons, is Chicago's expected starter. But the calls from Bears fans for Justin Fields, the No. 3 overall pick, have already begun.

Coleman, who spent two injury-plagued seasons in San Francisco, joins a backfield in New York where he's likely to complement Ty Johnson, La'Mical Perine and rookie Michael Carter. ... Conner was Pittsburgh's backfield workhorse most of the last three seasons, but will be part of a 1-2 punch in Arizona with Chase Edmonds. ... Drake broke out during his two seasons with the Cardinals, scoring 18 touchdowns in 23 games. Las Vegas is doubling down with Drake and Josh Jacobs.

Jones, the Falcons' career leader in catches and yards receiving, was traded along with a 2023 sixth-round pick to Tennessee for the Titans' second-rounder in 2022 and a fourth-rounder in 2023. He hasn't practiced much in training camp because of a leg ailment, but will form a formidable 1-2 receiving duo with A.J. Brown when healthy. ... Green signed with Arizona after 10 years in Cincinnati, where he's second to Chad Johnson in various team career receiving marks. ... Looking to give Daniel Jones more weapons, the Giants signed Golladay to a four-year, $72 million contract.

Life at tight end without Rob Gronkowski hasn't been great for New England, which brought in two of the more productive players at that position over the last few years.

The 6-foot-8, 380-pound Brown returns to New England, where he played left tackle in 2018, after two years with the Raiders. ... Thuney bolsters the line in front of Patrick Mahomes after five years with the Patriots. ... All-Pro Linsley, a fixture on Green Bay's line the past seven years, signed a five-year, $62.5 million contract with the Chargers, making him the NFL's highest-paid center. ... Moses signed a one-year, $3.6 million deal with the Jets to play right tackle and form bookends with left tackle Mekhi Becton in front of Wilson.

Watt became one of the faces of the league during 10 years with the Texans, so it'll surely be strange seeing him rush the passer in another uniform after signing a two-year, $28 million deal with Arizona. ... Browns fans are drooling over Clowney teaming with Myles Garrett to wreck opposing backfields. ... Ngakoue split last season between Minnesota and Baltimore and finished with eight sacks, a total he has reached or surpassed in all five of his NFL seasons.

Ingram was a consistent pass-rushing threat during nine seasons with the Chargers except for last year, when knee injuries limited him to seven games and no sacks. ... Dupree was a key performer on Pittsburgh's defense the last six seasons, getting 39 1/2 sacks. He signed a five-year, $82.5 million contract with Tennessee in the offseason and appears healthy after a torn ACL ended last season prematurely. ... Judon was one of New England's big free agent signings, getting a four-year, $56 million deal after being selected for the Pro Bowl the last two seasons.

Peterson was a three-time All-Pro and established himself as one of the game's top cornerbacks in 10 years in Arizona. ... Butler, whose goal-line interception sealed New England's Super Bowl win in 2014, spent the last three seasons in Tennessee.

Prater, who still holds the NFL record with his 64-yard field goal while with Denver in 2013, kicked for seven years in Detroit before signing a two-year deal with Arizona in the offseason.