QBs Stafford, Murray ruled out for Cards' visit to LA 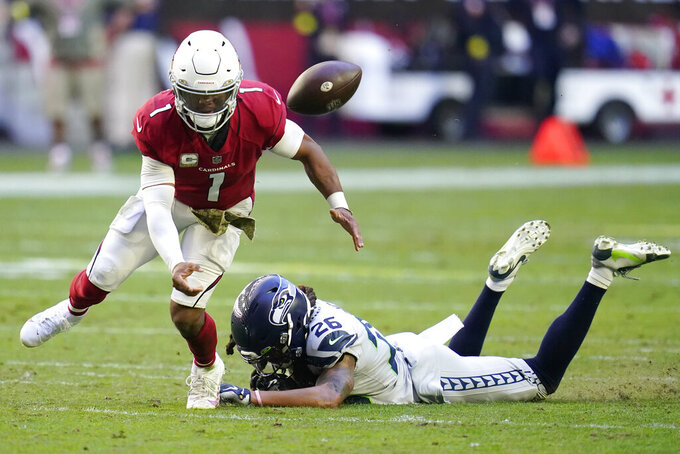 Arizona Cardinals quarterback Kyler Murray (1) fumbles the ball after being hit by Seattle Seahawks safety Ryan Neal (26) during the first half of an NFL football game in Glendale, Ariz., Sunday, Nov. 6, 2022. The Seahawks recovered the ball. (AP Photo/Ross D. Franklin)

INGLEWOOD, Calif. (AP) — Quarterbacks Matthew Stafford and Kyler Murray will not play in the Los Angeles Rams' game against the Arizona Cardinals.

Both teams also will be without their starting left tackles Sunday at SoFi Stadium with Alaric Jackson and D.J. Humphries both ruled out because of injuries.

John Wolford is expected to start behind center for the Rams (3-5), while Colt McCoy takes over for the Cardinals (3-6).

Stafford was placed in the NFL's concussion protocol on Tuesday, and he wasn't ready to return. The Super Bowl-winning quarterback apparently was injured during last week's loss at Tampa Bay.

Stafford hadn't missed a game since joining the Rams, and he had only missed eight games over his past 12 NFL seasons — all in 2019 with the Detroit Lions because of a back injury.

Wolford has not played extensively in his four seasons with Los Angeles, but made two starts during the 2020-21 season. He replaced Jared Goff for a regular-season finale victory over Arizona and again for the Rams' first playoff game at Seattle.

Murray has a hamstring injury that will keep him out for the first time this season. McCoy started three games last season while Murray was out with an ankle injury, going 2-1.

Arizona also will be without cornerback Byron Murphy, while Los Angeles is without run-stopping defensive lineman Greg Gaines.