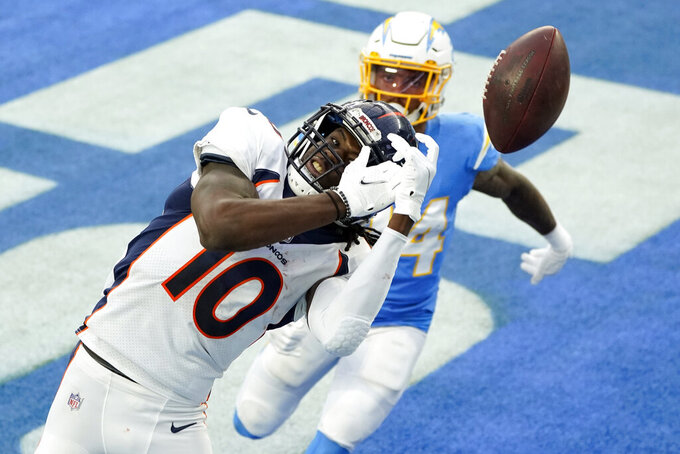 DENVER (AP) — The Las Vegas Raiders and Denver Broncos are jockeying for draft position, not the playoffs.

The Raiders’ once promising season was derailed by five losses in the last six games following a 6-3 start, and their playoff hopes were extinguished by Jon Gruden’s dubious decision in the closing minutes last week that resulted in a 26-25 last-second loss to Miami.

That leaves the Raiders (7-8) outside the playoffs for the 17th time in the past 18 seasons. All that’s left to play for is a win in the finale to avoid their fourth straight losing season.

“If we can show that our team is improving with getting that eighth win, even if it’s slight, it still shows improvement,” quarterback Derek Carr said. “As a team, that’s what we’re striving for.”

Denver’s season was arguably derailed before it even began. Von Miller suffered a freak season-ending ankle injury six days before the opener, and the cavalcade of injured teammates who followed included Courtland Sutton, Jurrell Casey, Mike Purcell and Albert Okwuegbunam.

The injury epidemic and the coronavirus pandemic were the primary drivers in Denver’s fourth consecutive losing season and fifth straight year without a playoff berth.

That, and the league’s worst turnover differential — minus-20, double that of the next worst team, the 49ers, at minus-10.

Denver has managed only a dozen takeaways, one shy of the franchise low set in 2008, to go with 32 giveaways, including an NFL-high 23 interceptions.

“Sometimes when you get out of whack that way, it’s one side or the other being the major culprit, but it’s been a team problem this year on both sides of the ball,” Broncos coach Vic Fangio said, “and obviously we have to rectify it.”

Raiders tight end Jason Witten will break Hall of Famer Tony Gonzalez’s record for tight ends by playing in his 271st career game. Witten has missed only one game in 17 NFL seasons and ranks second all-time at the position with 1,228 receptions and 13,046 yards, and is fifth with 74 TDs.

“To have an opportunity like this, I think that’s just the way I tried to play,” Witten said. “I think in this league, the minute you feel like you’ve arrived or you belong, you’re going to get passed up. I think my advantage and kind of my edge for me was that every day of every moment, I never felt like this game owed me anything. I had to go earn it.”

Darren Waller is putting the finishing touches on one of the most productive seasons in Raiders history. He has 34 catches for 537 yards the past four weeks, giving him 98 catches for 1,079 yards on the season. Waller needs seven catches to break Hall of Famer Tim Brown’s single-season franchise record of 104 set in 1997.

“He’s got the Tim Brown, Hall of Fame, All-Pro work ethic, concentration, focus, desire and he has the right attitude every single day,” Gruden said. “He’s a premier competitor in the walkthroughs, in the meetings and on the field, and that’s why he’s standing where he is today as one of the best.”

Jerry Jeudy’s rough rookie season hit a low point last week when he was targeted 15 times but caught just six passes and dropped five balls, derailing a comeback against the Chargers in a 19-16 loss in L.A. Fangio said he’s certain his fiery first-round draft pick will use the letdown as kindling for a prosperous career, but he’s not going to force feed him the ball Sunday.