Raiders cling to playoff hopes with 17-13 win over Denver 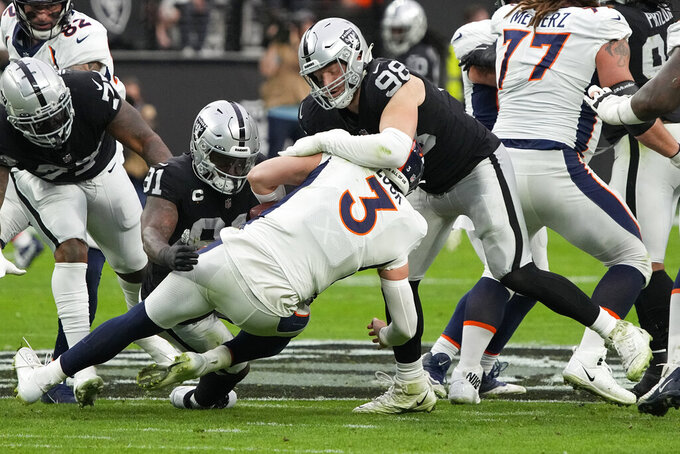 LAS VEGAS (AP) — With the Raiders trailing by six points at halftime Sunday, Josh Jacobs told the coaches to give him a chance to get into a rhythm, to make up for a lost fumble, and to put their trust in his running abilities.

Jacobs ran for 57 yards on seven attempts on the Raiders’ opening drive of the second half, which went for 75 yards over nine plays. It ended with Peyton Barber’s 5-yard TD run that gave Las Vegas the lead for good in a 17-13 victory over Denver.

Jacobs finished for 129 yards as the Raiders rallied to defeat the Broncos and stay relevant in the AFC playoff picture.

“Just give me a chance to play the style of ball that I want to play; the offensive line, we all came to an agreement and went out there and did it and executed,” said Jacobs, whose performance on the ground marked his first 100-yard rushing game of the season.

With the win, the Raiders (8-7) severely damaged the postseason chances for AFC West rival Denver (7-8), which dropped its third game in the last four. Dallas, meanwhile, clinched the NFC East through tiebreakers thanks to the Las Vegas victory.

The Raiders have responded after a 2-5 stretch by winning two in a row, previously beating the Browns 16-14 in Cleveland on Monday. Las Vegas has held three of its last four opponents to 17 or fewer points.

“We’re seeing a team that has responded well to adversity, whether it’s before the game or whether it’s during the game,” Raiders interim coach Rich Bisaccia said.

Las Vegas quarterback Derek Carr completed 20 of 25 passes for 201 yards with one touchdown and an interception. Carr completed at least one pass to all seven of his targets, led by Zay Jones, who had six receptions for 50 yards. Hunter Renfrow had three catches for 40 yards and one touchdown, while Foster Moreau and DeSean Jackson each had four receptions.

After controlling much of the first half, the Raiders turned over the ball on consecutive drives spanning just three plays, allowing the Broncos to take a 13-7 lead at the half. But Las Vegas’ defense never wavered, stopping the Broncos on six of their nine drives, and keeping them out of Raiders territory on five of those drives.

“We have guys running to the ball like crazy,” said recently named Pro Bowl defensive end Maxx Crosby, who finished with a sack, one quarterback hit, and two tackles for loss. “You don’t see D-lines running like us. And that’s a credit to (defensive line coach Rod) Marinelli and all the guys in our room.”

Lock, starting for injured Teddy Bridgewater, finished with 15 completions on 22 attempts for 153 yards. Bridgewater suffered a concussion in last week’s 15-10 loss to the Bengals.

“They did a good job up front on us,” Broncos coach Vic Fangio said. “We could never seem to get our backs through the first wave of the defensive line and we had a hard time finding any room there. You get 158 yards of offense and eight first downs, it’s hard to say anything good about the offense."

Renfrow became the third wide receiver in franchise history with 90 catches in a season, joining Hall of Famers Tim Brown (four times) and Jerry Rice. His 92 receptions are tied with Rice for second-most by a receiver in one season. Renfrow is one of six Raiders to haul in 90 passes. TEs Darren Waller (twice) and Todd Christensen (twice) and RB Charlie Garner also had 90 in a season. Waller holds the franchise record with 107 receptions last season.

Las Vegas turned over the ball three times, and for the 10th time in its last three games. The Raiders had a plus-4 turnover margin through their 5-2 start to the season and into their bye. Since Week 9, they have a minus-13 margin during a 3-5 record.

The Broncos were missing starting center Lloyd Cushenberry III, who went on the list Thursday.

Denver CB Ronald Darby left in the third quarter, was evaluated for a possible concussion, but returned shortly afterward.

Carr went into the medical tent after being sacked by Shelby Harris in the third quarter with what Bisaccia said was a chest injury, but returned for the next possession.

Broncos: travel to the Chargers on Jan. 2.

Raiders: travel to the Colts on Jan. 2.