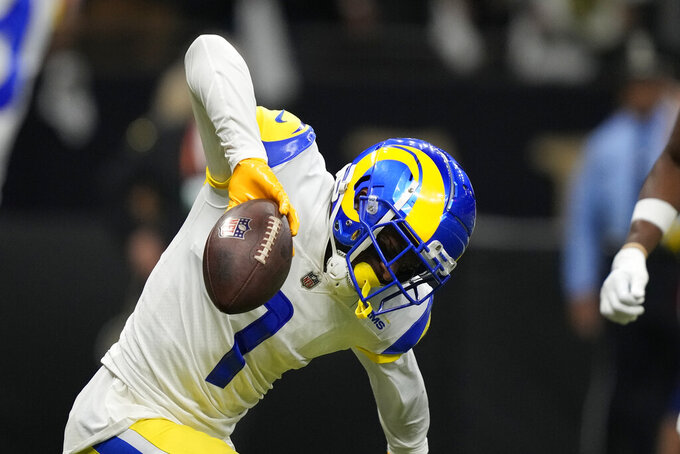 The Rams' 27-20 loss to the New Orleans Saints sent them into their first four-game losing streak since their homecoming season in 2016. Sean McVay took over the following year and ushered in a half-decade of success, but the defending Super Bowl champions have nearly run out of chances to get this ensuing season back on track.

“I’m not a big fan of losing,” said Rams defensive lineman Greg Gaines, who has never had a losing season in high school, college or the NFL. “I’m a competitor. We’re all competitors at the highest level, and none of us likes to lose.”

The dismal afternoon had one particular lowlight: Stafford was having a solid performance in his first game back from a one-game absence in the NFL's concussion protocol before he left early to be evaluated for another concussion.

McVay said Monday afternoon that the Rams are still trying to determine whether Stafford will go back into the concussion protocol. Although the Rams have never even confirmed Stafford had a concussion two weeks ago, it’s increasingly possible Stafford could miss more games, seemingly all but ending the Rams’ chances of making any run back into contention.

“I’m not going to be reckless, and we’re going to be really smart with Matthew,” McVay said. “You can't be too careful, (but) we'll wait and see what the actual diagnosis is.”

Although this loss was perhaps their most discouraging yet, given how eminently beatable the Saints seemed to be, the Rams' problems in New Orleans were the same as in previous weeks: A patchwork offensive line is the fundamental flaw in an offense that has taken a spectacular step back.

Stafford was sacked for the 29th time this season in New Orleans.

But while the Rams' offense struggled yet again, the defense also produced a mediocre performance against a highly controllable offense.

Coordinator Raheem Morris' group has soundly outperformed McVay's offense all season long, but neither unit was good in New Orleans.

A trip to Kansas City on Sunday to face the powerhouse Chiefs seems almost certain to push the Rams deeper into their spiral. Los Angeles has never been irrelevant down the stretch of a season during McVay's tenure, but this team is teetering.

The NFL's worst rushing team entering the weekend racked up a season-high 148 yards, with Cam Akers getting 61 and rookie Kyren Williams looking sharp with 36 yards on only seven carries.

McVay showed more trust in the run game than in recent weeks, and it was a factor until the Rams fell behind.

The defense allowed 27 points by a Saints team that had managed just 23 in its previous two games combined. Los Angeles couldn't get off the field on five scoring drives by New Orleans, providing much less help than usual for the struggling offense. The Rams' pronounced lack of complementary football this season is insurmountable when neither side of the ball is performing well.

Tutu Atwell's second NFL reception was a beautiful 62-yard catch down the sideline for his first career touchdown. The Rams never threw to him again, and he was a run blocker on the only other six snaps for which he was on the field. The 2021 second-round pick has been a bust so far, but it's still unclear why McVay won't even try to use the undersized Atwell as a regular receiver, given the Rams' injury problems.

Darrell Henderson got only two carries after feeling “a little something” in his knee before the game, McVay said. Henderson has been the Rams' most regular contributor in the running game for the past few years, but he will be a free agent this winter, and LA might be moving on from him early.

170.8 — The Rams' yards passing per game in their four outings since the bye week. They were averaging 205 yards per game before the bye, and they averaged 273.1 last season.

The Rams have never been a bigger underdog in McVay's career than they are Sunday. A loss to Kansas City would make the Rams 3-8, putting them close to the point where they'll have to consider shutting down certain key veterans and preparing for 2023 — when they won't have their very high first-round pick, thanks to the Stafford trade.