Rams confident in John Wolford if Stafford sits out Sunday 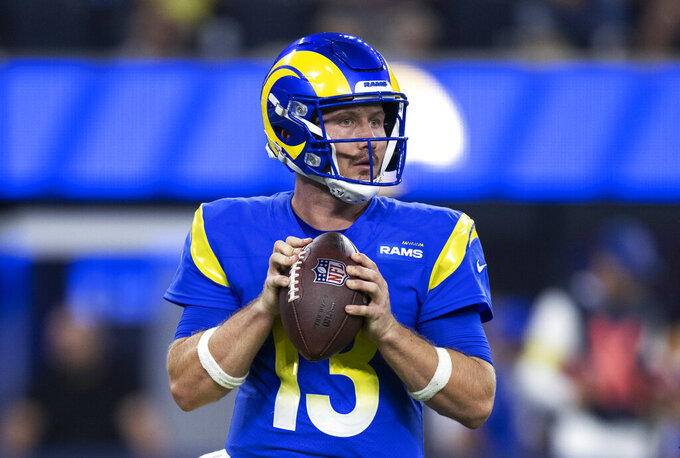 FILE - Los Angeles Rams quarterback John Wolford looks for a receiver during the NFL football team's preseason game against the Houston Texans on Aug. 19, 2022, in Inglewood, Calif. Wolford will be the Rams’ starting quarterback against the Cardinals on Sunday if Matthew Stafford isn’t cleared to return from the concussion protocol. (AP Photo/Kyusung Gong, File)

THOUSAND OAKS, Calif. (AP) — John Wolford has led the Los Angeles Rams to victory over the Arizona Cardinals before, and his teammates are confident he can do it again if needed Sunday.

The fact that Wolford has never won another NFL regular-season start and has barely played at all since that exciting debut in Week 17 of the 2020 season is not a public concern for the Los Angeles players and coaches, who will be riding with their seldom-used backup quarterback at SoFi Stadium if Matthew Stafford isn't cleared to return from the concussion protocol.

“Me and Wolf of Wall Street, we go way back,” All-Pro receiver Cooper Kupp said Thursday, invoking one of Wolford's nicknames. “We've had some time playing with each other, so if that's what it is, it will be fun going out there with him. He's got great command. He's been running this offense for a little while, so if it comes to that, we'll be ready to go.”

Stafford watched practice on Thursday at the Rams' training complex while Wolford led the first-team offense in workouts. Bryce Perkins, who is in his second season as a third-string quarterback on the Rams’ active roster, also got work.

The Rams could know by Friday whether Stafford will be cleared to play, but coach Sean McVay said Wolford is preparing to take over — although in classic football form, Wolford said he always prepares as if he's the starter.

“Not much of a change,” Wolford said. “Be ready to go if I’m called on, and pumped to play if I get to.”

It's been a while since Wolford got meaningful snaps, but he has been on the Rams' roster and in McVay's meeting rooms for four seasons since going undrafted out of Wake Forest in 2018 and getting cut by the Jets before playing for the Arizona Hotshots in the only season of the Alliance of American Football.

Wolford spent 2019 on the Rams' practice squad, winning the coaching staff's approval with his preparation and athleticism. He was named Jared Goff's primary backup in 2020, and he impressed McVay enough in that playoff-clinching, 18-7 victory over Arizona to be given the start over a not-fully-healthy Goff in the Rams' first playoff game a week later.

But Wolford got hurt in the first quarter at Seattle, and Goff came on to lead the final victory of his Rams career. Goff was replaced by Stafford a couple of months later, and Wolford settled into two more seasons as the backup QB.

Four years is a fairly long tenure for any backup quarterback, particularly with another passer of Perkins' talent also on the roster. The situation is a measure of the confidence McVay feels in Wolford.

“I think his teammates rally around him, and he’s got a great mastery and ownership of what we’re really trying to get done,” McVay said. “There’s moving parts to what we’ve done year in and year out, (and) this year has obviously been a unique year in and of itself, but there’s still some foundational elements that are very comfortable and familiar for John.”

In his brief playing time in 2020 and during the past few preseasons, Wolford has demonstrated a running ability far superior to Goff or Stafford. His presence against the Cardinals would allow McVay to call more plays putting a quarterback in motion, perhaps bringing some unpredictability to an offense that has struggled at the simplest tasks for long stretches of several recent games.

“It's a much shorter learning curve than people might think," Kupp said. "He's done this, and we know he prepares the right way. If his name is called, he'll be ready to go out there and do what he needs to do Sunday.”

The Rams all say they won't rush Stafford, and they won't allow Stafford to rush himself. Even though Los Angeles' playoff hopes would take a major blow with another loss in the next few weeks, they're all publicly confident Wolford can do the job capably while their Super Bowl-winning quarterback clears the concussion protocol.

“This isn't something you muscle through,” Kupp said. "It's been very clear with concussions that this isn't something like an ankle. It's not a knee. It's something you have to handle the right way for your family and yourself. I hope he feels that and he knows, because it's so against his nature. He's played through so many things in his career. It's just in his nature, and that can grind on you when that's how you've played your entire career."