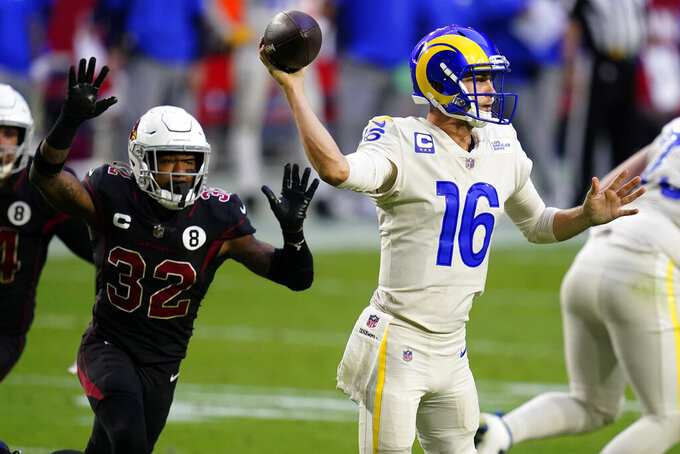 LOS ANGELES (AP) — Everybody around the Rams realizes Los Angeles' superb defense has been much better than its inconsistent offense for most of their successful season.

When the defense finally had a few rough moments in Arizona on Sunday, the offense stepped up and produced the Rams' highest-scoring performance in 24 games for a 38-28 victory.

That teamwork suggests good things down the stretch for the Rams (8-4), who find themselves in first place in the NFC West with four games left in a season in which they were widely picked to finish last in their ultracompetitive division.

With just three days to prepare for a Thursday night showdown with New England (6-6), the Rams have little time for analysis or reflection this week. And while there's plenty to learn from their win in Arizona, most of it would emphasize the fact that both sides of coach Sean McVay's team have proved they can be good enough to beat just about anybody.

“What we do over the next 3 1/2 days is going to be indicative of the position we put ourselves in to have success,” McVay said early Monday morning, already deep in his planning. “In December, all you can ask for is being involved in games that matter, and our guys have done a good enough job to put themselves in a position to be relevant right now, but it's only about what we can do this Thursday.”

What they did in Arizona was solid: McVay's offense racked up 463 yards, nearly doubling the Cardinals' output (232). Jared Goff picked apart the secondary with short passes, while rookie running back Cam Akers stepped up with 72 yards and a touchdown.

The Rams' offensive line still wasn't dominant, and Los Angeles still struggles to create big plays and large chunks of yardage. Yet the Rams' offensive teamwork, steadiness and resilience were enough to beat a strong division opponent on the road.

With back-to-back upcoming home games against AFC East foes, Los Angeles' task for the next two weeks is to stay right with the Seahawks (8-4) until the rivals meet in Seattle on Dec. 27 in a game that could decide the division.

As he often does, Goff had an impressive bounce-back game from a clunker against San Francisco. After starting 5 for 10 on the Rams’ first two series in Arizona, Goff went 32 of 37 for 324 yards with a touchdown pass, a rushing TD and no interceptions or sacks the rest of the way.

Goff made the most of McVay's game plan, but opposing coaches can see that the Rams hardly ever throw downfield anymore. Goff has completed only one throw longer than 20 yards downfield in the Rams' last three games, according to the NFL's Next Gen Stats, and only three of his 37 completions in Arizona even went 10 yards downfield. The Rams lack a true deep threat after trading Brandin Cooks to Houston in the offseason, and they've simply removed the option from much of their game planning. Eventually, it could cost them.

Defensive back Troy Hill has been targeted by many opponents looking to stay away from Jalen Ramsey and Darious Williams this season, but Hill made the Cards pay. Although he wasn't perfect, the sixth-year pro had one of the most productive games of his career, capped by a 35-yard interception return for the clinching touchdown with 4:33 to play. Role players Justin Hollins and Sebastian Joseph-Day also stood out amid the defense's up-and-down effort.

The Rams couldn't go two straight weeks without a kicking misstep, and their special teams still aren't great. Matt Gay clanked a 37-yard field goal attempt off the upright, giving the Rams a missed field goal or extra point in 10 of their 12 games this season. Punt returner Nsimba Webster also fumbled while curiously trying to make an unimportant play in the fourth quarter, allowing Arizona to score a quick touchdown that trimmed LA's lead to three points.

Defensive tackle Michael Brockers got a neck stinger in Arizona, but was feeling better Monday, McVay said. The Rams don't yet know whether Brockers will be limited Thursday. Rookie Akers also has a shoulder injury that would have kept him out of practice Monday. McVay doesn't expect the return of any eligible players from injured reserve this week, including safety Taylor Rapp.

9 — The number of Rams who caught a pass from Goff. That's the second game in three weeks with nine receivers catching passes. Every skill-position player who played more than seven snaps caught a ball.

A short week for a rematch of a miserable Super Bowl performance, but at least the Rams will face the Patriots with two key players who were unavailable because of injury in February 2019: receiver Cooper Kupp and running back Malcolm Brown.