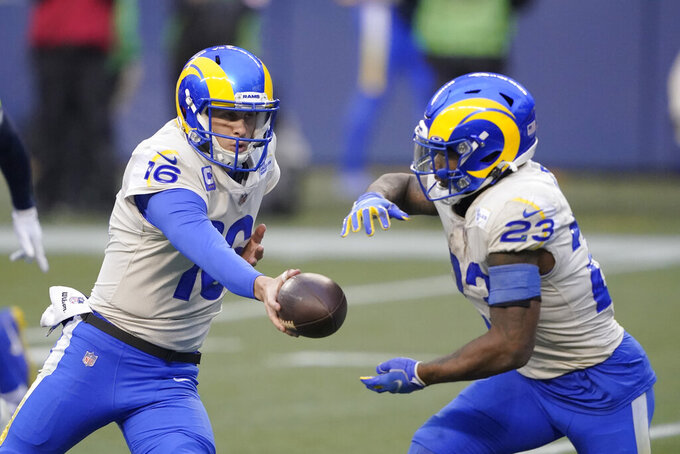 Los Angeles Rams quarterback Jared Goff (16) hands off to running back Cam Akers during the second half of an NFL wild-card playoff football game against the Seattle Seahawks, Saturday, Jan. 9, 2021, in Seattle. (AP Photo/Ted S. Warren)

LOS ANGELES (AP) — Cam Akers grew up in Mississippi, and his football journey has taken him to Tallahassee and Los Angeles.

So the Rams' rookie running back hasn't spent a whole lot of time in the type of frigid weather he's about to experience in Green Bay, where it's expected to be below 25 degrees at kickoff Saturday before the sun goes down and it really gets cold.

Akers does have one prominent memory of freezing football, however: Florida State lost at Notre Dame two years ago on one of the coldest gamedays in South Bend in decades.

What does he remember about that chilling experience?

“I scored two touchdowns,” Akers said Tuesday with a grin.

Akers has plenty of reasons to be confident heading to the frozen tundra, particularly after what's happened during the second half of his increasingly impressive NFL debut season.

After his breakout 171-yard game against New England last month, a high ankle sprain incredibly sidelined him for only one week. And in his first NFL playoff game last weekend, Akers racked up 131 yards rushing and 45 more receiving against Seattle in the Rams' 30-20 victory — played in the chilly 30s, no less.

“I’m still learning,” Akers said. “I’m still taking everything day by day. Just putting them in my pocket and just trying to learn and grow. The biggest one is, don’t get comfortable. Last week was a big game, but the next one is even bigger.”

The top-seeded Packers (13-3) are the next big thing in Akers' way, but the rookie appears to be peaking at the ideal time for the Rams (11-6). Although his growth into a role as Todd Gurley's replacement began slowly, it's picking up speed like one of his downfield runs.

In Seattle, Akers became the first Rams rookie to rush for 100 yards in the postseason for a franchise born in 1936. His 176 combined rushing/receiving yards were the third-most by any player in a postseason game in Rams history, trailing only efforts by Eric Dickerson in 1986 and Lawrence McCutcheon in 1974 — and more than Hall of Famer Marshall Faulk ever managed in his famed tenure with the Greatest Show on Turf.

Left tackle Andrew Whitworth put it succinctly in Seattle: “He’s made of the right junk. His heart, his passion for the game is special.”

When Robert Woods made his first career playoff touchdown catch to clinch the Rams' win in the fourth quarter, the veteran receiver thanked Akers for it: Woods got wide open on a play-action because the Seahawks were so concerned about the rookie's running ability.

“For him to bounce back how he did and take over that running back room and then lead it, really for a rookie to come in and make the right cuts and the right runs in critical situations, I think that’s super huge,” Woods said. “It really opens up this offense. But the biggest thing is just getting him in space, seeing him make moves and make guys fall and hit the ground.”

Akers has come on quickly for a rookie who played sparingly — and didn't even touch the football in two games — over the first 12 weeks of the regular season, instead sharing carries with Darrell Henderson and Malcolm Brown.

When he got a prominent role in early December, Akers capitalized with 340 yards in the Rams' final four regular season games before his stellar work in Seattle.

The Green Bay defense has noticed.

“He puts a foot in the ground and he cuts back and he’s explosive,” Packers defensive line coach Jerry Montgomery said. "He’s got twitch. He’s a little bit of a jump-cutter at times, and then there’s times when he puts one foot in the ground and hits it and gets it. Just explosive. Can take it to the house on any snap. Just a dynamic back, and tough at that, too. He’s got good vision. It’s been fun to watch.”

With Henderson sidelined by a sprained ankle, Akers is clearly the main man now for a team with a rich history of elite running backs.

He is eager to carry the load in the cold with a trip to the NFC championship game on the line.

“I couldn't have imagined as many ups and downs,” Akers said. “I guess you can with corona, but just being able to navigate our way through this season and still be productive just shows a testament to our team's focus and commitment to winning.”

NOTES: All-Pro DT Aaron Donald is making progress from the rib injury he sustained in Seattle. Coach Sean McVay was blunt about his superstar's prognosis for Saturday: “Unless something unforeseen happens, the Terminator will be ready.” ... McVay doesn't plan to name a starting quarterback again this week, he confirmed Tuesday. John Wolford is recovering well from the stinger that sent him to the hospital in Seattle, while Jared Goff's surgically repaired right thumb will be one week healthier. ... The Rams held only a walkthrough workout Tuesday, but they would have held several players out of practice if they had practiced: Donald, Wolford, WR Cooper Kupp (knee), LG David Edwards (ankle) and LB Terrell Lewis (ankle). Whitworth (knee) and kick returner Nsimba Webster (hamstring) also would have been limited.