Rams' Wagner gets to show off familiarity with NFC West 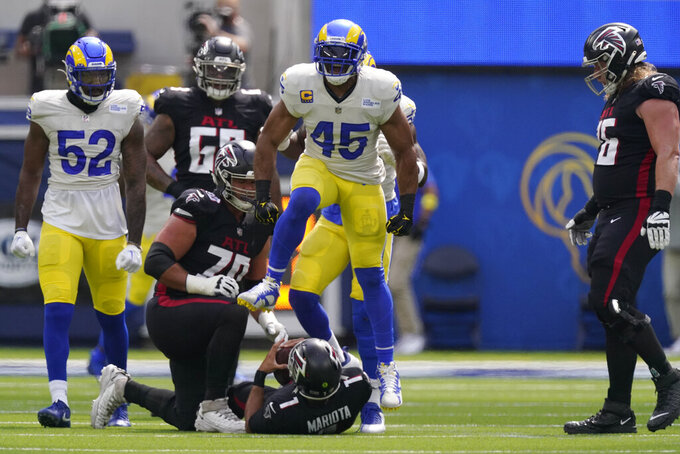 But Murray’s improbable escape act as part of the comeback win at Las Vegas, darting back and forth across the field for 20 seconds before scampering into the end zone, reminded the Los Angeles Rams coach just how special he can be.

“This guy, the play is never over with this guy,” McVay said Wednesday.

As the Rams (1-1) prepare for their NFC West opener at the Cardinals (1-1) on Sunday, they have a new option to try and wrangle Murray in inside linebacker Bobby Wagner, who has plenty of familiarity with Murray from his time in Seattle.

“Really, it’s just up to us as a front and coverage all working together to make sure he doesn’t scramble like that,” Wagner said.

Los Angeles is 5-1 against Murray in the regular season and overwhelmed him in a 34-11 wild-card round romp in January, with the overlapping trait being forcing him into back-breaking mistakes. He has thrown eight interceptions against five touchdowns in those six defeats, compared to the efficiency Murray showed in going 24 of 32 for 268 yards and two touchdown passes in the 37-20 win in Week 4 last season.

The Rams have also been largely effective in limiting Murray as a runner. He has 152 yards and one touchdown on 28 carries, bur Wagner cautioned Murray’s mobility can present itself in a number of ways.

“I think if you let him kind of run around and make crazy plays, come off your guys, not only does he do that well but the team ignites off plays like that, so we definitely have to limit those opportunities for him,” Wagner said.

McVay agreed with that assessment, pointing to Murray’s ability to find receivers down the field while moving.

“He’s a very, very special player and somebody that we have to account for,” McVay said. “It’s definitely something that our guys are excited about, but it’s a great challenge, without a doubt.”

For Wagner, the test Murray presents will allow him to carry over his past experience. He was his typical productive self in four games against Murray with the Seahawks, totaling 43 tackles with three tackles for loss and one sack while splitting the results on the scoreboard.

When his 10-year career in Seattle came to an end this offseason, Wagner’s priority was staying on the West Coast to remain close to family. Staying in the division was a “bonus” that came with the five-year contract to sign with the Rams, he said.

“But it is nice to know teams that you’ve played throughout your whole career. They haven’t really changed much, and get to play against them in a different defense so it’ll be new to them,” Wagner said.

The initial returns have been positive, as Wagner has seven tackles with one sack in each of his first two games for Los Angeles.

“I think he’s integrated super well,” defensive tackle Greg Gaines said. “He’s got obviously a lot of experience, which gives him a commanding presence, and he’s our play caller in the huddle so I think he just fits in really well."

The expectation is both Wagner and the defense will get better as they get more comfortable with each other, particularly building off division games such as Arizona where there is already a high degree of familiarity to build off.

Gaines is already able to play the run game differently because of the early rapport he is building with Wagner.

“It’s awesome having him back there ’cause instead of having to be more two-gap-ish, I can just take one side and know he’s gonna be there to fit the other side, and that helps a lot,” Gaines said.

NOTES: Reserve TE Brycen Hopkins was suspended three games for violating the NFL’s substance abuse policy on Wednesday. ... RG Alaric Jackson is likely to start this week after Tremayne Anchrum Jr. sustained a season-ending ankle injury against Atlanta on Sunday. ... CB Cobie Durant (hamstring) did not practice and is day to day. ... WR Van Jefferson will not practice this week as he continues to recover from knee surgery.