Rodgers, Packers look to get back on track at Washington 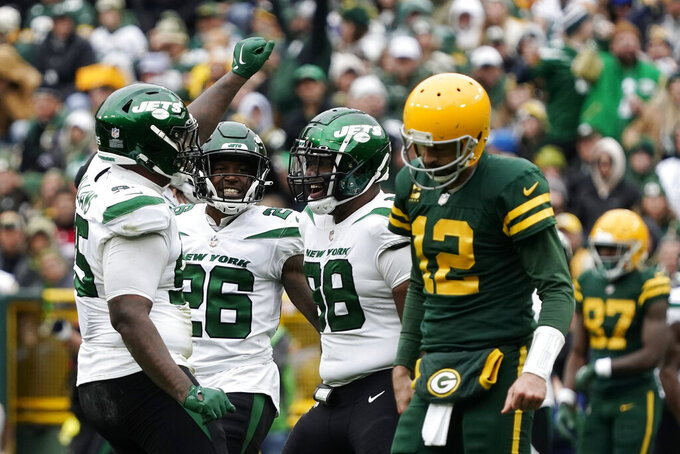 LANDOVER, Md. (AP) — Aaron Rodgers walked into the locker room after a practice this week and felt a lively vibe that belied a rare Green Bay Packers losing streak.

They've lost two in a row during the same regular season for the first time since Matt LaFleur took over as coach in 2019. Green Bay has the chance to end the skid at the Washington Commanders on Sunday.

“We just want to get back out there,” Rodgers said. “The beauty of this league is you get another chance. The tough part is we got to deal with all the feelings for a week after a bad performance.”

He was referring to a 27-10 home loss to the New York Jets, which came in the aftermath of a closer defeat against the Giants in London. But there's reason for optimism: The Packers are favored to win, according to FanDuel Sportsbook, and at 3-3 they could sure use that to keep pace in the playoff race.

Even after ending their losing streak at four, the Commanders at 2-4 and last place in the stout NFC East would need to go on a run to catch up with their division rivals. While Rodgers nurses a thumb injury on his throwing hand that is not expected to sideline the four-time MVP, Washington is turning to Taylor Heinicke at quarterback after starter Carson Wentz had surgery to repair a broken right ring finger.

Heinicke, who started almost every game last season following his surprise breakout performance in the playoffs the previous January, gets another chance against the team he grew up cheering for as a big fan of Brett Favre. He had an interception and a fumble in Washington's 24-10 loss at Lambeau Field last year.

“Starting 15 games last year, I feel a lot more comfortable, a lot more confident in what I need to do to win and what not to do to lose,” Heinicke said. “Against these guys, move the ball, get down in the red zone and score this time, I like our chances.”

Chances are the Packers will find their groove at some point after blowing a 14-point lead to the Giants and getting blown out by the Jets. They certainly think so.

“We just haven’t put it all together,” running back Aaron Jones said. “We have all the weapons and we have the talent we need in this locker room. We’ve just got to put it all together, and we know that’s coming because we’ve done it. We’ve shown that we can do it and now we just have to do it for a whole game.”

Washington coach Ron Rivera has no interest in weighing in on Indianapolis Colts owner Jim Irsay's comments that there's “merit” to removing Dan Snyder as Commanders owner. He also would like to shield his players from the entire situation, which has been part of Rivera's job since joining Washington.

“We’re focusing in on playing football,” Rivera said. “That’s my big thing is I’m just gonna look at what we’re doing on the football field and stay focused on that.”

Rodgers, asked about Snyder on Wednesday, wasn't sure if he thought the drama harms the NFL.

“It’s obviously been some incidents that reflect poorly on certain organizations, which isn’t great for the league, but as you guys all know, the league is going to protect itself and I’m sure they’ll make the right decisions,” Rodgers said.

The Packers won’t have their receiving unit at close to full strength.

Randall Cobb injured an ankle in the Packers’ 27-10 loss to the New York Jets and is expected to miss multiple games. Rookie second-round pick Christian Watson missed the Jets game with a hamstring injury and didn’t practice Wednesday or Thursday.

Sammy Watkins returned to practice this week after missing four games with a hamstring injury, but that doesn’t necessarily mean he will be playing Sunday.

Washington's biggest strength this season has been its defensive line, led by Jonathan Allen and Daron Payne inside and Montez Sweat off the edge. The Commanders have 19 sacks, tied for fourth in the league, and Rivera thinks the defense has the chance to be better than 2020 when it ranked second.

“They’ve done some really good things, and we just got to continue to work on being disciplined,” Rivera said.

During LaFleur’s tenure, the Packers are 37-1 when they force at least one turnover. But the defense hasn’t produced any takeaways during this skid, and they’ve forced just four turnovers all season.

Green Bay has a minus-4 turnover margin. The Packers had an NFL-leading plus-32 margin from 2019-21.